Happy Birthday, Carl! I Got You a Holiday Holocaust!

Last weekend saw the annual Hollywood Christmas Parade (known in our innocent Southern Californian youths as "The Santa Claus Lane Parade", or "The Most Boring Thing On Channel 11 Besides Those I Love Lucy reruns).  A not terribly beloved and kind of annoying local tradition, it was started in 1928 by the Hollywood merchants association in an attempt to boost retail trade and turn the eponymous Boulevard into a storied shopping destination like New York's Fifth Avenue. The City of Los Angeles pitched in, capping the lamp-posts with faux Christmas trees and even swapping out the regulation street signs for wooden banners that read "Santa Claus Lane", and looked as though they'd been carved by elf slave labor in some polar sweat shop. 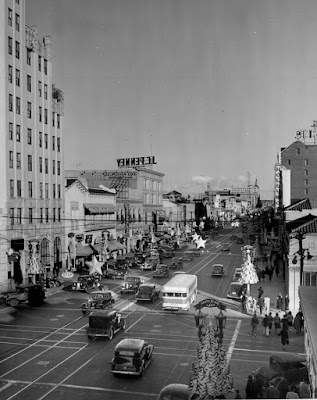 Hollywood Boulevard, looking east, 1938. Happily, every building you see still stands. Unhappily, they're all owned by the Church of Scientology.

Sadly, the parade never achieved the cachet and notoriety of its crosstown rival, the Tournament of Roses, and as the Boulevard degenerated into a haven for hookers, porn flicks, and dime bag dealers, the quality of the Grand Marshals also declined, from movie stars to soap stars to former hosts of half-forgotten local kids' shows who retired abruptly under mysterious circumstances.  Still, the tradition continues, and we continue to pay attention to it, for like the frost upon the pumpkin, the Hollywood Christmas Parade is one of the two classic signs that Christmas is nigh. The other, of course, is Carl's birthday, which like Jesus's was also foretold by Persian astrologers, although due to light pollution making it harder to navigate by the stars, they no longer make house calls.

Oh! Wait...There's one other Yuletide omen indigenous to our neighborhood, and that's this teepee-shaped pile of raw lumber, which first showed up in 2012, prompting us to ask the question: 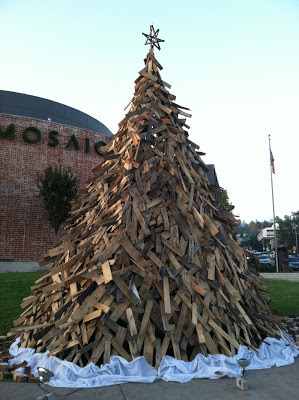 This tangle of two-by-fours has appeared outside our local hipster church for the past three holiday seasons and hasn't burned yet, so I guess that answers the question: it's not a bonfire.

At least, not yet.

This year they flocked the tree -- or at least whitewashed it -- and added lights, which is all well and good... 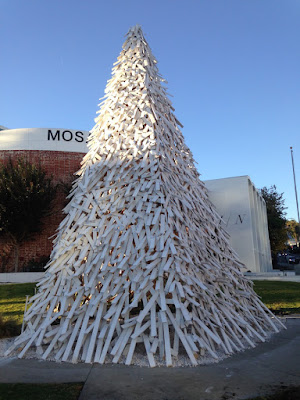 ...until you peek inside and see a jungle of sub-code wiring that just screams "Triangle Shirtwaist Factory Fire." 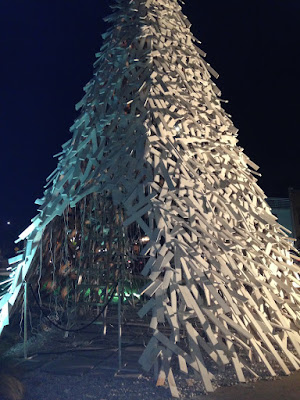 Wait...Those aren't power strips just dangling by plugs and extension cords, are they? 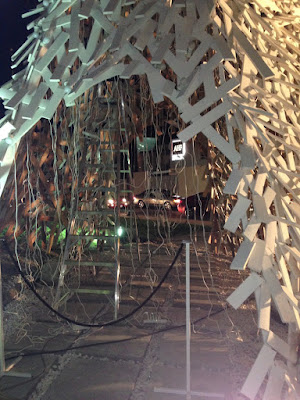 Why yes they are. And the metal ladder in the middle of it all is a nice touch too. 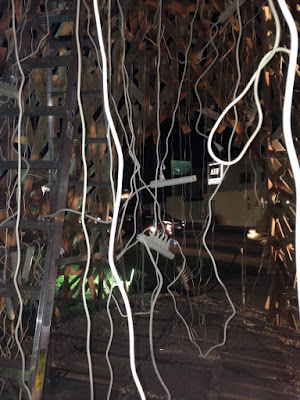 I don't think I've seen anyone begging to get electrocuted this bad since the accident that made Kurt Russell a genius in The Computer Wore Tennis Shoes.  This should make the next rain storm much more interesting...

But I digress. Habitually. Pretty much as a career, in fact; I should probably have it printed up on business cards. What I meant to say was that today is the natal anniversary of our good friend Carl, AKA Actor212, and I feel moved to write something in his honor, because otherwise he'll just keep giving me crap on Facebook about my low productivity. But really it's a pleasure, because Carl is a friend of long standing, a man of many parts, most of them Finnish; a gifted underwater (and over-water) photographer, an eloquent blogger, an unfailingly witty commenter, a doting father to his cat, ThumbPer, and a virile, if virtual ladies man -- at least on Wonkette ("Of course, all Wonkette commenters make vague flirting noises at me — explicit ones, if they’re Actor212").

Mary is struggling with a particularly pukey style of flu at the moment, so I'm going to skip the usual entree and go straight to dessert: Finnish actress Anna Easteden, whose name is just one preposition away from the title of a James Dean movie. 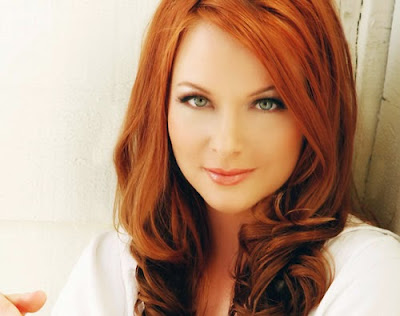 And of course, what postpartum celebration would be complete without the obligatory Sexy Birthday Lizards! 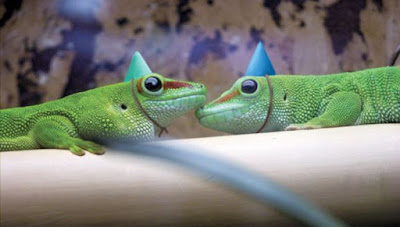 So please join me in wishing the happiest of birthdays to Carl, and if you're coming to our local Christmas Tree lighting ceremony, please wear rubber-soled shoes and bring some marshmallows and a chemical extinguisher.
Posted by Scott at 6:09 PM

Email ThisBlogThis!Share to TwitterShare to FacebookShare to Pinterest
Labels: Birthdays, War on Christmas

Happy Many Carl, & many more!! Also, stay the hell off the Facebook, you two! (If you left AOL, why'd you go back?)

My Santa Claus Lane Parade story: In the later '80s, when I lived in Silver Lake, my next-door neighbors attended the parade. When they returned home someone who might (or might not) have followed them from the parade took a few shots at them from a car, & everyone in my pad hit the floor.

That "tree" is in front of the cult that took over the Xian Science (or whatever) dump at Hollywood & La Brea, innit? I really have to get out more. Or even once in a while. (Possibly w/ an accelerant.)

Hope Mary's better soon, & advance good wishes for The Next Yr. to all!

Wow, it's been a long time since I updated or posted to my blogspot page . . . I really should keep up on these things . . . 2015 already . . . practically 2016 . . . sounds like science fiction: Murfyn typed a message and pressed the send key and a worldwide network of servers and cables and wireless transmitters (connected via satellites) made his eclectic collection of audio and video files available to billions of people . . . huh . . . I should get back to work . . . oh, Happy Birthday, Actor212 . . .

Happy Birthday Carl, and many more!

What that X-mas tree needs inside it are 2 giant Geckos! Then it would be perfect!

Happy B-Day, Carl, and those lizards are awesome.
~

Pretty good exclamation, Scott. But Katy, I would NEVER inflict that lumber clusterfuck & GIGANTICALLY-OBSCENE FIRE-HAZARD/ELECTRICIAN'S-WORST-NIGHTMARE upon any innocent lizaredds!!! No, if you wanna stuff any "living" creatures into that deathtrap, start with Travolta & work your way down the Scientology Fucktardia Magnum food chain.

I hope that your birfday was everything that you wanted &/or needed, Carl, and that the night-court judge will be appropriately understanding on those few small crimes & misdemeanors that SURELY ensued from your leisure-suited bacchanal. And if you ever get to meet that cute little redhead Anna Easteden, I want pictures! (Of HER, you pervert!!!)

Give Mary a big ol' Get-Well-Soon hug for me, Scott, just spray her down with Lysol first, so that you're not NEXT... Nobody needs an entire HOUSEHOLD of barfy/barfy-out-the-other-end flu-stricken folk, and you KNOW that Moondoggie is NOT going to be available or findable when it comes time to clean up THAT mess.

Gekkos WITH hats! I loved their dance hit!

Thank you so much, Scott et al, now that I'm sober enough to see. I've had a wonderful and challenging year and if the money holds out, I might be able to afford heat this season. If not, I've been fattening ThumbPer up.

My Hollywood Parade memory was the first time I saw it on Channel 9 (WOR, back then when we wore onions on our belts as was the style of the time) and I think Roy Rogers was the Grand Marshall, altho it could have been Rip Torn. It was hard to tell with all the sequins. Anyway, I sat there and wondered "How does LA have a Christmas parade (n.b. Apparently Hollywood's War on Christmas was int he planning stages) with palm trees, not pines and in shirtsleeves?"

Little did I know that it was merely a Macguffin to get us all to accept Christmas trees fashioned from shredder leavings...but then I guess all that confetti for the Dodgers World Series parade had to be put to good use, huh? California is, after all, the home of earth friendly.

By which I do not mean that you fuck every gopher hole. That's Alabama's version of adultery on your sister.

Scott, please pass along my best wishes for a quick return of service to health. It seems like you two have been trading volleys of vomit all year. I do hope you two can sort out this match before it goes into tiebreakers.

I was quite surprised to see a ginger Finn but then I remembered the long standing Finnish tradition of "wife carrying" and just assumed her husband more dragged her than carried her thru the lingonberry bog. That stuff never quite comes out, as anyone who's OD'd on puolakka can tell you.

I mean, come on! The name itself is a dead giveaway onomatopoeia.

Actor, you are a twisted man. And you revel in it which is even more twisted.
So, happy birthday to you and a happy corkscrewing year.

Being from the land of the Kalevala and all, it's a shame that stingy bastard Lemminkainen won't lend you his Sampo. Then you'd have salt for unlimited birthday margaritas.

Late to the smorgasbord (or the Suomi equivalent) but is it ever too late to croon "hyvaa syntymapaivaa" into your shell-like? I don't think so. (That's one stinker of a language you've got there, fella.) Really, Carl, I hope the next year will be totally hyvaa!

No one deserves lime-green lizards with little blue hats more, I'm sure. Or beautiful redheads with heart-shaped faces.

BTW, I should mention that Finnish sounds awesome.

Hope you feel more human soon, Mary. Look at it this way: at your flueyest, you're 100 times more human than Donald Trump.

When I first married some thirty odd years ago...so THAT'S where my hair went!...my bride of the day was Catholic and I was Evangelical Lutheran. I insisted on a dual ceremony for one reason and one reason only: my minister had a voice that could make Christopher Lee sound like Sniffles the Mouse.

And I asked him to do the homily in Finnish.

So here's poor Father Guy -- nice man, insisted I kneel, good luck with that, Father. I'm Protestant -- sounding for all the world like Wayne Allwine's audition for Mickey Mouse, and then steps up my pastori, who then shuts the mic off and in his normal voice, fills the cathedral so much that his voices echoes twice as he reads John 2 (the wedding where Jesus turns water into wine).

And there's poor old Father Guy, trying to shrink into his robes as he steps back up to the dais and forgets to turn the mic back on.

So many stories of fun, goodness, lizards and potential electric shock! One chock-a-block post, I tell you what.