On The Island of Misfit Toys 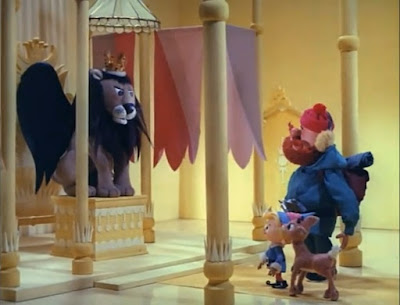 "It's a great part," she tells me. "You'll be playing Aslan!" Then I get to the costume fitting and they stick me with Brian Blessed's wings from Flash Gordon and a crown from Burger King, and I chased that casting director all around the parking lot, snapping at her hamstrings before I finally brought her down with my powerful jaws and feasted on her carcass.

HERBIE: Hold it now, hold it. You're sentient toys that can sing, dance, and carry on a conversation? Guys, that's way cooler than any of the toys we make at Santa's workshop.

RUDOLPH: Cooler than any toy you can buy in a store, too.

HERBIE: Yeah, I think you were all brought to this island to eliminate competition.

CHARLIE IN THE BOX: So...we're not misfits?

RUDOLPH: I don't think so.

DOLLY: Not even me? 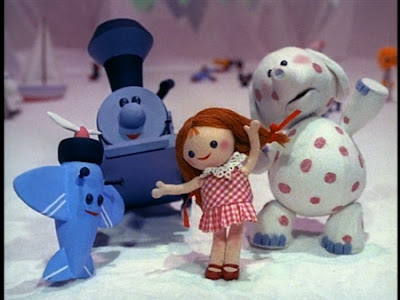 HERBIE: How exactly are you supposed to be a misfit?

RUDOLPH: In the 50 years this cartoon's been airing, nobody has every figured that out.

DOLLY: Really? Guys, come on. LOOK at me!

RUDOPLH: What are we supposed to be looking at?

DOLLY (exasperated sigh): I don't have a nose!

DOLLY: Yeah, "Ooohhh". Kinda puts your problem in perspective, doesn't it? I'd love to have that honker. Or ANY honker. 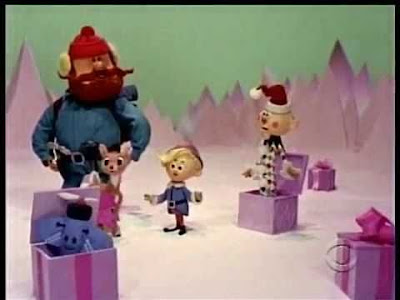 HERBIE: Eh, it's not so much of a blessing when you're standing downwind of Yukon Cornelius.

RUDOLPH: Especially if he's had chili for lunch.

HERBIE: Especially if you're an elf.
Posted by Scott at 12:55 PM

Dear heart, whatever it is that you're smoking, I'd severely appreciate it if YOU FUCKING ***SHARED*** some!!!!!!

I'm not smoking anything at all. That's me sober.
Imagine what I'd be like if I WAS stoned.

I'm waiting breathlessly (no nose) for Rudolph II. I see at least 3 more moves coming out of this "sentient misfit toys" theme! And don't say "Toy Story" to me! Those toys were FAR from sentient. Pfft!

Bill, honey, if the Powerball ever hits & I get to do the cross-country tour in my Bio-Willie tour bus, I am SSSOOOOOOO buying you the BIGGEST batch of magic brownies EVER and then turning you loose upon some yuppie-filled venue like a farmer's market or a PTA meeting, and filming THE ENTIRE THING!!!

Hey, I hadda give up my dime-bag a month habit back in '98, never got to try shrooms, and only ever had anything related to hash as "hash oil" on a camel cigarette back in '93, so dammit, if I ever happen upon that kinda money, we are going to MAKE UP FOR LOST TIME!!! As long as it doesn't give me fuckin' pneumonia again, of course... Sarcoidosis took all the fun outta weed. But fuck no, Calvin Broadus' murdering misogynist, snake-looking ass will NEVER get a cent outta ME, not even his name-brand weed!

Thank you, Scott, for reminding us all of Bill's wunnerful post about Misfit Toys, which would be the PERFECT name for a punk band, if any &/or all of us were musically talented enough to mangle the three-chord structure as created by the MC5 & perfected by the Ramones.

And Bill, I still wager that there was more than green tea in your mug when you wrote this, dear heart... heh heh heh... keep buying those Powerball/MegaMillions tickets and THINK OF YOUR RANTY AUNTY ANNTI WHEN YOU HIT ONE!!!