Not to start things off on a somber note, but it's been a little over a year since we lost Riley (September 11, 2014, to be precise, but who's counting?), and her absence still generates a considerable amount of phantom pain. I've endured the death of a pet before, as I know most of you have, and it always hits hard, but with Riley it still feels like she left us only yesterday. Maybe it's because I'm getting old, and my emotions, like my bones, are fragile and slow to knit; or maybe it's because I just loved that damn cat so much, with her big brain, and her fussy sense of decorum, and her weird, underpants-huffing fetishes.

So I've been kind of a pussy about getting another pussy, and Mary hasn't pushed it either, mostly because of the cost. The first cat I ever adopted, Wild Thing, leaped from behind a dumpster on 10th Street in the East Village and scrambled up my leg during a torrential downpour, and the only expenses I incurred involved a trip to the bodega on Avenue C for a box of Tender Vittles, a bag of Johnny Cat, and a tin of Band-Aids for my punctured shin. So basically, cats are like heroin -- first one's free, kid.  But now it costs a couple yards to bring home a rescue animal, and as we're still paying off Mary's surgery, since some of the bills arrived after we'd lost our insurance, we both agreed that taking on any additional financial burden could and should wait.

Moondoggie, however, changed our minds...

He adored Riley from the first moment he saw her, and made it his life's work to chase her around the apartment like Pepe Le Pew until she would finally, through a combination of sheer exhaustion and pure exasperation, permit him to lay his head on her ass. 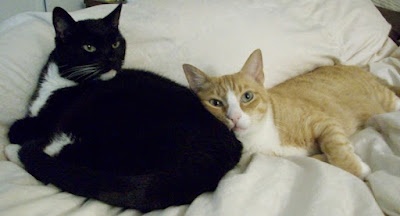 And I don't think he's ever gotten over her loss. For one thing, the two of them used to delight in pre-empting my recliner for snuggling purposes, but he hasn't gotten up on it once since she's been gone. And the changes to his personality and habits have only become more pronounced lately. Where once Moondoggie was the cat mostly likely to chill and Netflix, now he's a bundle of anxieties. If it starts to get dark before Mary returns from work, he goes into a mewling, pacing fit of insecurity. If we both leave the apartment at the same time, he becomes convinced we're never returning, and falls into a gran mal episode of drama queeny abandonment issues.

We had to face the fact that he's just no good at lone wolfing it. He needed a friend.

So on Sunday, while trying and failing to track down a kitten Mary saw at an adoption event several weeks ago, we discovered a four-month old black cat living in a plexiglass cage at Petco, and after gingerly extracting her for a test hug, found there was much purring and rejoicing.  Which was followed by an incredibly lengthy application form cum Meyers-Briggs test, and a home visit by two animal social workers to determine if we were fit parents. (I don't mean the social workers were animals, although that would've been incredibly cool; just imagine getting an inspection tour by a dapper, bipedal tiger like Captain Marvel's associate Tawky Tawny).  Anyway, it seems we must have passed, since we now have a new kitty on staff: 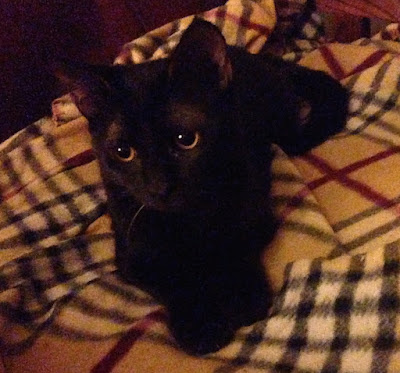 According to her medical records, "Shadow was found with her mother and siblings in a building being abandoned near Hollywood and Sunset when she was about three weeks old."

We were briefed on all the introduction protocols, how to keep them separate at first, etc., but the instant Mary put the pet taxi on the floor, Moondoggie appointed himself the Welcome Wagon, and flopped down in front of the open cage door. 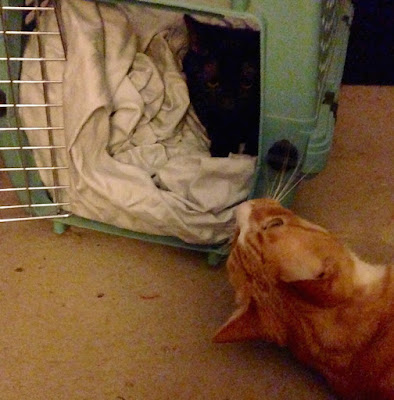 The hilariously karmic element to this story (or what Mary is calling "payback") is that Shadow's reaction to Moondoggie is exactly the same as Moondoggie's reaction to his first glimpse of Riley. She's spellbound. 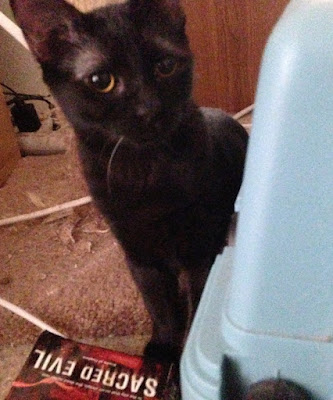 "Who is that gorgeous hunk of marmalade man?"

I really hope that book title doesn't prove prophetic.  Anyway, despite it being rather a cliche, we decided to keep the name Shadow because that's basically what she does -- shadows Moondoggie all over the apartment like a private dick -- and because the portmanteau couple name, "MoonShadow," is ready made. And comes with it's own theme song. Written by a guy named Cat!

Moondoggie remains, as he has always been, the gentlest of souls, without a mean bone in his body, and has been nothing but welcoming to the new addition (even when she stole his bed -- as seen in yesterday's photo -- he just sighed and stretched out on the floor). But I gotta say, in the last 48 hours, Shadow has run him ragged; and even when she's not chasing his tail, she's staring adoringly at him to the point where he's starting to feel self-conscious. 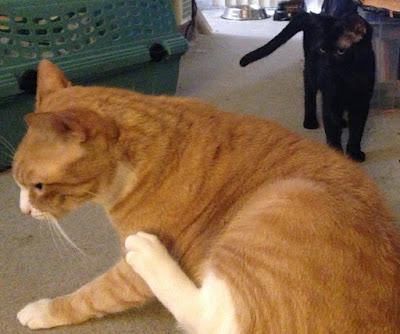 "Finally, I've got a moment to scratch--" 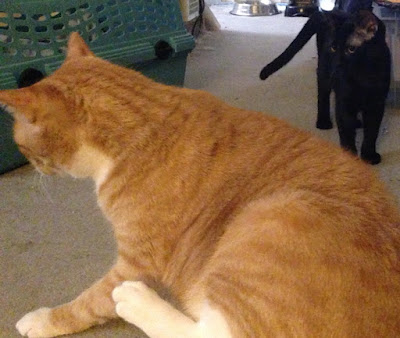 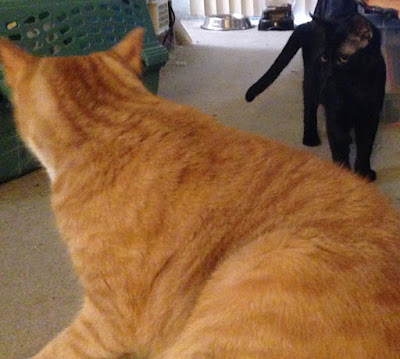 Of course, one never knows how any relationship will develop over time; but while I'm no cockeyed optimist, there is one thing which gives me hope that it might all work out... 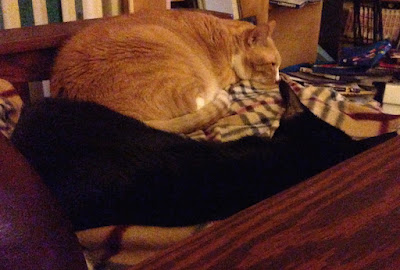 For the first time in fourteen months, Moondoggie is curled up again on his favorite chair.
Posted by Scott at 12:24 AM

Let me be the first to go AAAAaaaawwwwww.

These little spots of sunshine, they still freak me out when I "discover" them.

Ah, you warmed my hurting heart. We lost the best kitty I ever had exactly 2 months and one day ago; I wonder if I will ever be able to think of her and smile, instead of cry.

Good for you! I'm so glad to see Moony back in "his" spot!

String, I'm so sorry for your loss. I know how you feel, and exactly what you mean. It's only been in the last couple months that I've been able to look back on some of the photos and videos I shot of Riley and Moondoggie in the heyday of their partnership and not fall apart.

Strangely (or maybe not), Mary and I were sharing a lot of fond memories of our dear departed girl last night, as we watched Moondoggie ineptly attempt to wrangle this new kitten while recalling how effortlessly Riley schooled his orange ass when he was the new kid on the block.

Hollywood and Sunset? Sitting at a soda fountain, no doubt.

Shadow is adorable. He reminds me of the first kitten my daughter had, way back in kindergarten: Midnight. All black except for a blaze under his chin and on his belly, looking for all the world like a preacher with a weight problem.

Awww... Shadow's adorable! Years ago we had a black cat named Shadow (she used to follow us and was ALWAYS underfoot) who lived to be 25. She died about 30 years ago, and we still miss her. All our current kittehs (2 of whom are black) send purrs.

I'm telling you right now, if DC and WB ever do a Capt. Marvel film, and Paul F. Tompkins is NOT CAST as Tawky Tawny, There. Will. Be. OIL! I mean, BLOOD!

This is wonderful, you guys. I'm sure Riley would approve of the whole thing; her Moon may have been a loving pest, but they know each other's moods. Anxious and lonesome he should not be. She is undoubtedly watching the re-appropriation of the Chair with a calm cat smile from the advanced bardo whereupon she currently lounges, where the tuna is fresh and the undies not to be despised.

That little black cat looks like she has a lot going for her.

I loved your description of being claimed by Wild Thing. (It probably rang a personal bell cuz I used to live down that way back in the Era.) Our current situation as restaurateurs, inn-keepers, and door-persons to Jingle the maybe-Korat cat started in a similar manner, downpour and all. He didn't climb my leg - that's pretty special, Scott - but he did slam his soaking wet, skinny self against my calf repeatedly, saying "Eh-eh!" in a high, authoritative voice while gazing up at me with grape-green eyes. Resistance was futile. But I didn't have to fill out forms.

String, I'm so sorry. They're so individual - and every now and again, a personal connection develops that is just as specific and close as any human friendship -- different, but not less. Two months isn't long. It'll get better gradually. Eventually she'll be there in your mind permanently as a benign presence, and you'll even be able to think of her great personality and peculiarities and laugh.

When cats meet for the first time, it's always interesting. :)

I love your new addition to the family!

Merry fucking Xmas! goddam.
For everybody. I mean, this looks for all the world like a win-win-win-win situation, which may be setting some kind of record, and may not in fact even be legal, so I'll shut up now....

Shadow is a doppelganger for my Sydney (aka "Midnight") and they have similar pedigrees. Perhaps it's time to find a feline companion for her as well.

Congratulations on your new furry friend.

Happy is my heart for all of you! Kitty antics are healing belly laughter.

Very sorry to hear about the carpal tunnel syndrome, Keith. If only we could find you a rescue cat that takes dictation.