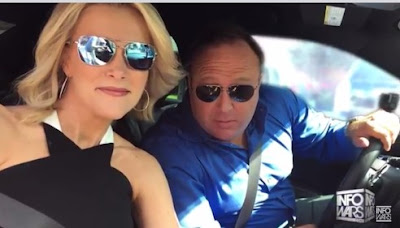 No, it's not the "Jones" behind the nation's current opioid crisis. And it's not that "Jones" from "Me & Mrs. Jones" either.

Having cleared a hurdle with global A-lister Vladimir Putin in her premiere excursion, Megyn dumpster-dives the D-List for an interview with the sorrowful, morbidly-derelict and preternaturally-nauseating niche podcaster Alex Jones, that guy who keeps on keeping the lovely city of Austin, TX "weird" but perhaps not in the way residents might prefer.

Your correspondent is not questioning Ms. Kelly's judgment, nor her ability to conduct television journalism.

However, I must point out Mr. Jones' earlier encounter with a somewhat legitimate news organization from a few years ago and it's a hoot an' a half. It begs to wonder whether something similar will obtain Sunday night. (Gut feeling is "Yes, of course.")

Jones said the Kelly interview marks a rare example of his agreeing to a sit-down with a mainstream media figure. He said he has turned down many other recent offers but realized that Kelly will likely have a big platform with “Sunday Night with Megyn Kelly.”

“I’d be dumb if I didn’t do some of these interviews,” Jones said.

Scott adds: And we'd be dumb if we watched, so let's all avoid dumbness together, yet each in our own way.

Under normal circumstances, accepting Megyn's invitation would itself be legal grounds for dumbness, since Jones' usual method is to rely upon his mouth's high cyclic rate for bullshit and riddle his interlocutor with 900 to 1,200 Lies Per Minute, But this isn't a live television broadcast that he can dominate through sustained shamelessness and pure shouty aggression. This is going to be taped, then edited by the lesser demons who toil in the sulfur-scented pits of the MSM.

Now I don't for a second doubt Jones' uncanny, flatworm-like survival skills. I am convinced that if you cleaved him in half, an equally repulsive Jones would grow from the severed stump and begin shouting lies the instant it formed a mouth . So Alex might be obliged to bob, weave, and dodge Megyn's more pointed queries, assuming she asks any, which is assuming a lot. He might, as they tool around in his SUV, abruptly bellow like a 19th Century circus strong man rupturing himself on the midway, or tear off his shirt in the Hardee's drive-thru in an effort to distract. But even though he can't filibuster the segment because there's no producer in the booth eyeing the clock and begging the on-air talent to end this tour of Bedlam so they can cut to a Boston Market commercial, Jones is more than a match for a woman who's spent her formative years reciting the produce of a propaganda mill, and -- as we saw with Putin -- hasn't the skills for a truly adversarial interview. Hell, Putin's a dictator who murders his detractors with impunity, he invades and occupies neighboring countries, he launched a cyberwar against the United States in an attempt to put a Manchurian stooge in the White House, and barely cares if you catch him at any of it, and during their encounter Megyn still came off like she was asking Miss South Carolina her opinion of world peace.

So here's my prediction: Megyn will get off one or two mildly skeptical -- perhaps even daringly wry -- comments about Jones in her wrap-up, thus burnishing her brand as the Reasonable Conservative, but during the interview segments, Jones will dance circles around Megyn like she was a maypole and he was a pigtailed girl in a frilly white pinafore.
Posted by Scott at 11:51 AM

The phrase "...flatworm-like survival skills" is what makes it art. Especially, since, when listening to NPR "Science Friday" they reported that when a flatworm was brought into space "to see what would happen", the flatworm grew two heads!!!