People Let Me Tell You Bout My Best Friend

Mary was supposed to be home today, but last night the doctors found another problem they want to correct, so she's undergoing a second, relatively minor, procedure today. Here's hoping she'll be released back into the wild on Saturday.

In the meantime, this is my fifth day as the sole adult in the apartment, and I'm beginning to feel like Bill Bixby in The Courtship of Eddie's Father, except nobody's dead, I don't have a Japanese widow to do the housework, and Eddie is two cats. 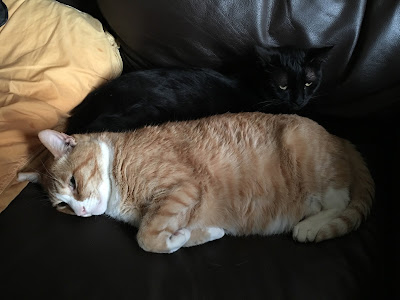 Two depressed cats.
Posted by Scott at 10:58 AM

I hope you and the puddies are feeling less depressed because Mary is home and OK. What a totally lousy thing to happen and all the pain of the aftermath.How is she doing?
I hope things at Chez Clev have returned to normal functioning. Best wishes and good vibes.

I second the above comment! Rest up, Mary, and feel better soon!

hope all goes well. I've been dealing with an elderly cat, too

Holy ratshit... I disappear for a couple years and everything goes to hell! What in the fuck happened to the woman?!?!?! Running nekkid in traffic again? (I get that tendency every so often, like when somebody on teh teevee links the words, "Trump" and "President"!) Far-too-adventurous trapeze sex? Chasing-down those missionaries who INSIST on ringing the doorbell despite every kind and generous warning? Whatever it is, I wish to fuck & back that I had pain meds to share with Mary, 'cause I *would*, but of course, since I got arrested last year, I also got fucked out of my doctor. Neat how that happens.

At any rate, please give Mary my love & commiseration, and an IOU for a shitload of professional-grade opiates. Hugs to you & kittehs, too.