[NOTE FROM SCOTT: Hi guys, just wanted to pop in and introduce a new contributor to WoC: Andrew Leal. I met Andrew through our old friend Ivan Shreve, Jr., and like Ivan he exhibits an encyclopedic knowledge of Old Stuff: Old Time Radio, classic films, Golden Age television, crappy Saturday morning cartoons, and lousy live action Disney flicks from the 1960s, as well as being unusually--perhaps even suspiciously--well-informed on the subject of Character Actors--so much so that he's become my go-to expert if I ever need to tell the difference between, say, a Charles Lane and an Olan Soulé. So please join me in welcoming Andrew to WoC, and enjoy this long-overdue critical reassessment, the first in a series we like to call, Flintstones on Film.]


Ah, Hanna-Barbera. Creators of hat-and/or-tie wearing critters, masters of sitcom past and future, their output dominated TV cartoons for over thirty years. Having saturated the tube, they turned to theatrical features, first with the sprightly Hey There, It's Yogi Bear (1965). The follow-up was The Man Called Flintstone (1966), a considerably rockier (ahem) outing.

Bill Hanna and Joe Barbera never met a trend they wouldn't hop on or a formula they wouldn't copy (even their own, witness the many Scooby-Doo clones). In this case, there were two trends. One, which faded very rapidly, was half-hour TV shows stretched out for the big screen. This included not one but two McHale's Navy flicks and by 1966, moviegoers were faced with Munster, Go Home! as well as Thunderbirds Are Go and Batman (the latter influencing Man's villain, the masked and caped Green Goose). 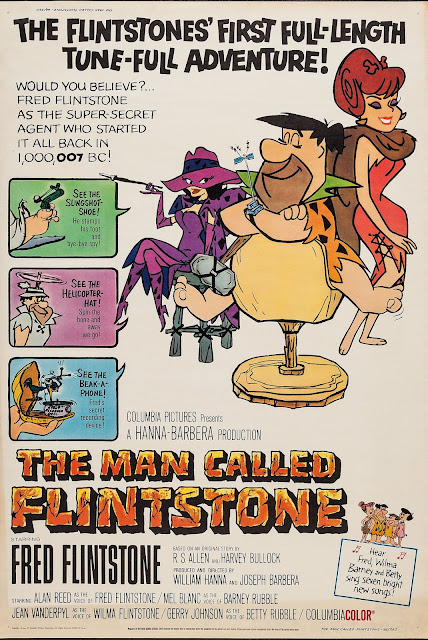 Bigger than that was the spy craze, which was everywhere in every flavor: the Bond flicks, Man from U.N.C.L.E., The Avengers, the spoofery of Get Smart, and countless imitations and knockoffs. Heck, earlier in 1966, Our Man Flint (no relation) hit theaters. Cartoons got into it from Bullwinkle's Boris and Natasha (their voice actors Paul Frees and June Foray are both in Man) to HB 's own Secret Squirrel and a previous spyjinx outing of... The Flintstones (“Dr. Sinister” from the fifth season in 1964). That outing was a better and shorter spoof, with a villain who *is* green, jabs at “Jay Bondrock” movies, a bottomless pit, and instead of Dr. No, the sometime ally Madame Yes who conveniently abandons Fred and Barney repeatedly (“I'm too important to be captured!”). 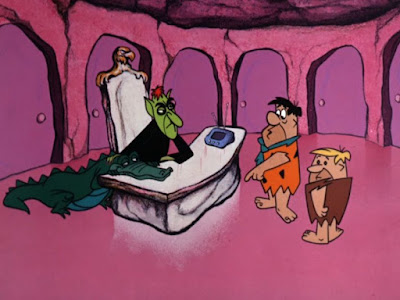 The Man Called Flintstone doesn't just rehash the spy stuff, but another plot (done twice on the show): Fred swapping places with an identical double in a position of importance. (When Bill and Joe recycle, they recycle!) But repeating seems fitting, as the series had just moved into almost perpetual reruns a few months prior. Apart from plot devices, also returning are the voices of modern stone-age family: Alan Reed (radio veteran with supporting parts in The Postman Always Rings Twice and Breakfast at Tiffanys) as Fred, and Mel Blanc taking a break from Bugs Bunny to play Barney Rubble, Dino, and assorted bits and beasties. Jean Vander Pyl is Wilma and Pebbles (though arguably her best HB role was Rosie the Robot on The Jetsons), but Bea Benaderet had jumped boxcars to Petticoat Junction, so we have Gerry Johnson as the second, less giggly Betty Rubble.

Even the new spy characters were cast from the series: Harvey Korman, pre-Carol Burnett and then the insufferable Great Gazoo on the home show, plays mostly straight as the government spy boss (“Chief Boulder,” of course) and less so as a Peter Lorre-esque henchman who in moments of excitement starts muttering “bali ha'i” thus revealing himself as the very first South Pacific fan. 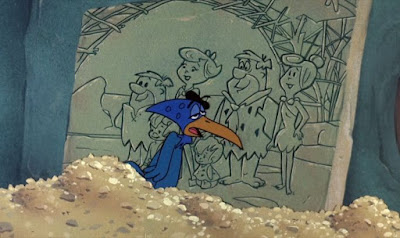 But hush, the “it's a living” prehistoric birds are starting the projector, and The Man Called Flintstone begins. The best gag of all is cut from the DVD and current streaming/TV versions due to ownership changes: Wilma in place of the torch lady in the Columbia logo. Then we get the obligatory stylized credits (take that, Saul Bass!) and ballad about our hero's prowess (“he thrives on a diet of daaaanger!”) which is actually pretty fun.

The movie proper (such as it is) opens with an all-too brief burst of near excitement, reminiscent of Jonny Quest (HB's best adventure effort): volcanos erupt, a feral pterodactyl flies overhead, and we watch a car chase between what appears to be Fred and a pair of swarthily painted thugs, Ali and Bobo (Korman and Paul Frees, both with dialects). 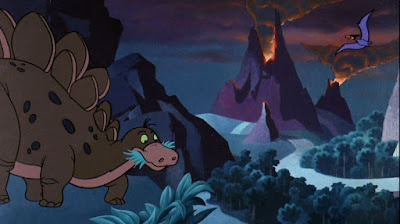 By sixties spy movie rules, henchman had to be racial stereotypes who you knew were bad mainly because they were foreign or wore funny hats. 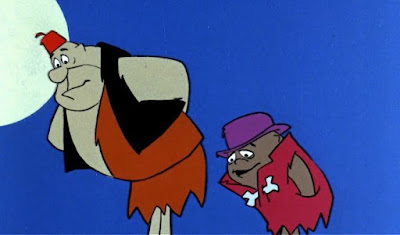 But no, the pursued is actually top agent Rock Slag (Frees in a Don Adams imitation, one of the better gags), who not only looks just like Fred but is wearing the same goatskin outfit and tie (how's that for sitcom cowinkydinks). Rock is ambushed twice by the Green Goose's goons, in action sequences played fairly straight (but also pretty dull, as far as cartoon cavemen receiving grievous bodily harm).

By the laws of sitcom coincidence, Slag is recovering at the only hospital in Bedrock (despite the high rate of boulder and dinosaur-related injuries) while Fred Flintstone is having his head examined (really). The chief goes all Prince and the Pauper and dupes Fred into “picking up a bird” for the government, with the carrot of an all expense paid trip to Eurock (except the actual countries remain un-stone aged: Italy, France, etc.) Fred is asked to take his place to meet a defecting lady agent Tanya (when she finally shows up, she's voiced by June Foray in Natasha mode) to lead him to this green bird. 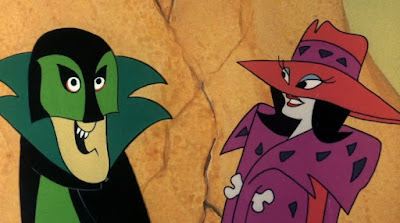 During Fred's briefing, we get our first song cue (five more to come!) They stop the action cold every time, and most are hallucinations or dreams. The one here, picturing Fred as a suave spy, is catchier and better illustrated than most, including some gorgeous dames who aren't so modern stone age. 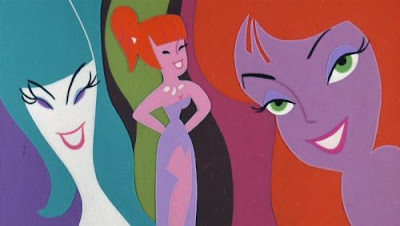 There's also a lyric about Fred using karate chops to send a bad guy “beddy bye,” but the visuals show him clearly pushing up petunias. This is the closest the movie gets to a body count, so enjoy it while you can. 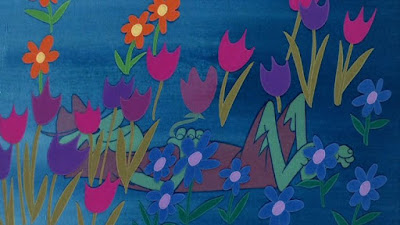 After yet another song, Eurock, here we come! Wilma, the Rubbles, and the kids all come along. The familys' pets Dino and Hoppy the Hopparoo were already checked in at the vet's (Hoppy wouldn't be seen again for decades, so I guess Barney forgot to pick him up). On the plane, the Rubbles have last class accommodations (which means riding on the wing and hanging on for dear life), but the bigger surprise was this bit of prehistoric product placement: the plane belongs to Qantas airlines. 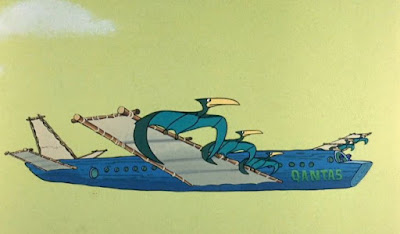 There's sitcomish complications in that Rock Slag, despite being identical to Fred, is a chick magnet, attracting a bevy of high-cheeked cartoon babes mostly meant to resemble the kind of European starlets that would show up in the real spy flicks. I couldn't quite decide if one lady was meant to be Elke Sommerstone or Brickette Bardot. 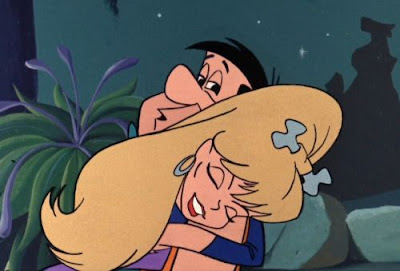 And still the songs continue. Pebbles and Bamm-Bamm get two treacly imaginary ballads (one with lyrics like “Tickle toddle”)... 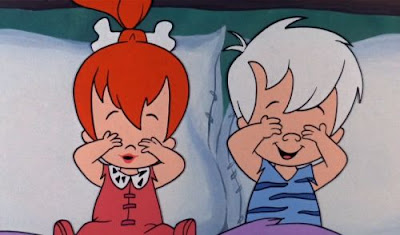 ...and guest vocalist Louis Prima croons an imagine spot of Fred and Wilma as Romeo and Juliet, in Shakespearean garb and a not-made-of-rocks balcony. One of the kids' songs imagines a knight and a dragon (as well as a Wild West sheriff and a fake Superman). So they're all imagining the future! 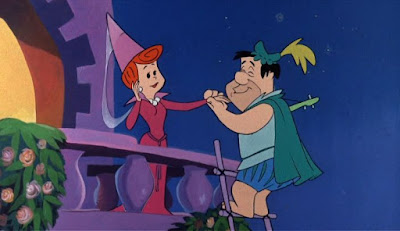 In between songs, the characters get what would be location footage in live-action, but here is just someone drawing a twig version of the Eiffel Tower or Fred careening on the Coliseum. The movie also pauses for TV-style gags (Wilma changes a tire just so a turtle jack voiced by Mel can make a wisecrack) which also slows things down. 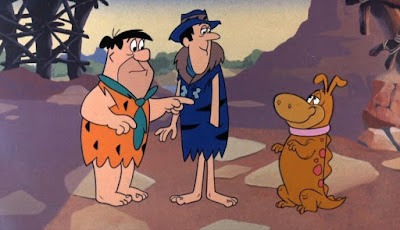 Visually it's better looking than the show itself, but it's actually below Hey There, It's Yogi Bear. 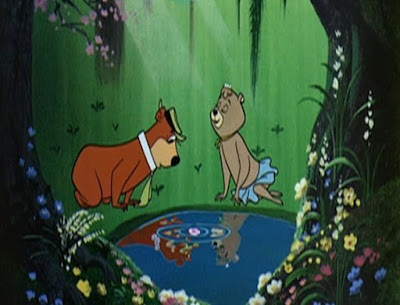 The intermittent action such as it is finally culminates in a showdown with the Green Goose of Paradise at your typical abandoned amusement park hideout, the better to do a chase on rollercoaster cars and into a funhouse mirror (stuff which would actually be pretty exciting in live-action, but for cartoon figures, there's a touch of “That's it?”)  But there are pluses here and there, mostly in the solid voice cast and the background art. There's a gas station with mammoths labeled Ethyl and Regular. 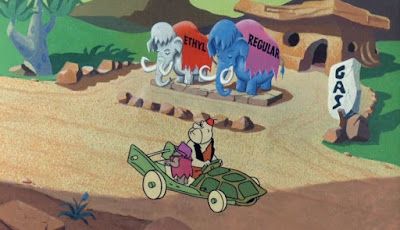 The Green Goose's lair has genuinely morbid flair (and Barney subjected to the rack). 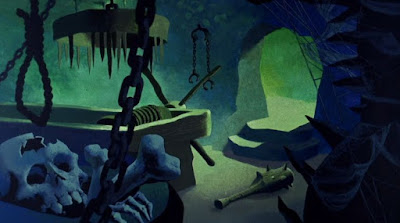 Even the score suddenly gets into it, with a brief snatch of “Funeral March of a Marionette” from Alfred Hitchcock Presents. 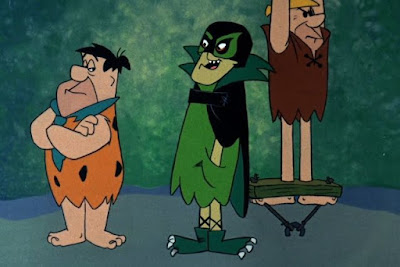 But beyond this, the spy stuff is often boringly straight, with chase after chase. The government agency so incompetent it could have been satire (but isn't), although there is this Dr. Strangelove-esque line, in reference to the Goose's deadly missile: “Our anti-missile missile isn't operational yet.” And of course, the Chief's bed has been bugged (why a government agency keeps a bed in his apparently floating office is of course not addressed). 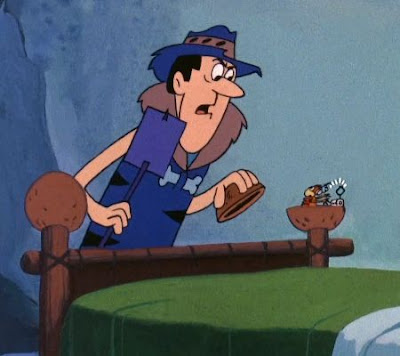 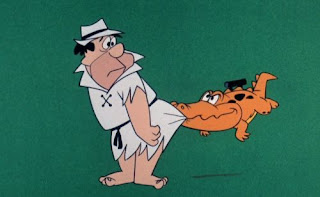 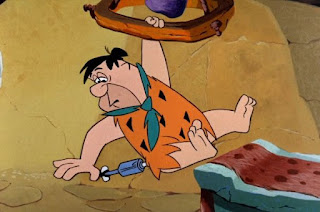 Mostly it just meanders, goes on too long, and just feels phoned in. More heart and effort went into Hey There, It's Yogi Bear, which has better visuals and manages to make one care about the fate of a hat and tie-wearing bear (dealing with typically scheming circus folk and their proto-Muttley dog and the perils of the city). Here, the most genuinely frightening peril Fred faces is an Italian woman and her burly brother who try to force him into marriage (and have absolutely nothing to do with the spy stuff). And yet Hanna-Barbera could produce a cover for the tie-in album which is miles above the movie, perhaps because it doesn't involve anything moving. 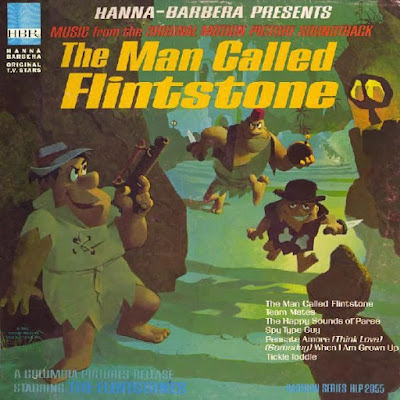 Overall, it's the definition of a movie for people who liked the show, or just want to park the kiddies to watch a barefooted neanderthal imperil his marriage on vague government dictates. But at least the end credits are cute, right? 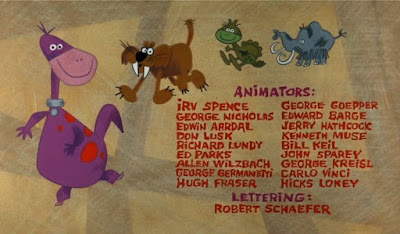 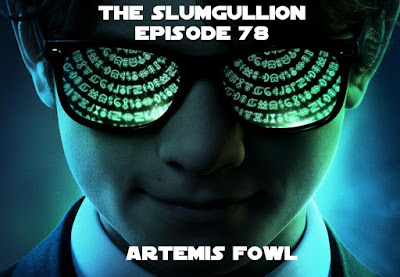 At least...it was beloved before this thing came out. I'm not even gonna make the obvious Artemis Foul joke, because I refuse to befowl myself.