Horrors of the Hollywood Christmas Parade!

[Quick Note:  Due to an unusually long car trip to see family over the weekend, my chronic back injury has fully flared up -- and is, in fact, more full of flare than Jennifer Aniston in Office Space -- but in the wake of the Beg-a-Thon, we have many people to thank, and I'll be writing more about that as soon as the drugs kick in.]

When I was a kid, the annual Hollywood Christmas Death March was called "the Santa Claus Lane Parade," and it was as low tech and quaint as as a hand-carved hobbyhorse from some tourist trap in Vermont.  The city spruced up the boulevard with lights and decorations, but the event itself consisted primarily of high school marching bands; modest, DIY floats that lived their shabby lives in the shadow of the Rose Parade and had a real Oh Who Honestly Gives a Crap? feel to them; and Grand Marshals who -- while admittedly more recognizable than the local newscasters and kiddie TV show hosts who invariably handled such duties in smaller media markets -- were solidly So What? style celebrities, in the Joe E. Brown, Tony Danza, Susan Lucci mold (this year we're getting Marie Osmond).  But hey...it was our Macy's parade, a cherished local tradition, and if you were a child growing up in Southern California -- where there is seldom any change in arboreal set dressing; the trees remain stubbornly green, the thermometer hovers steadily in the mid-to-high 70s -- you looked forward to this day as the official start of the Holiday Season.

But it didn't make money, so the Chamber of Commerce decided to kill it (although I give them credit for being the only local Republicans who can actually organize to get something done, even if it does involve the homicide of a child's dream).  But Disney has a major presence on Hollywood Boulevard, thanks to their flagship theater, the El Capitan, and they smelled a nice cross-promotional marketing opportunity, so they've stepped in and under their aegis the charmingly rough-hewn and amateur feel of years past has been replaced by the soulless, sub-contracted style of false, mandated cheer one one often finds at a State Fair.  Along with some of the most disturbing inflatable characters in holiday parade history.  They're the official barrage balloons of the War on Christmas™. 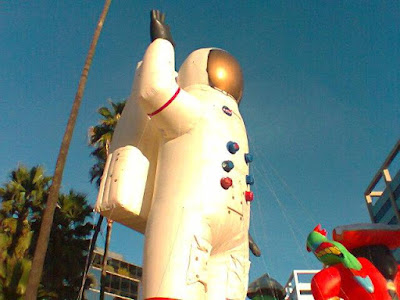 The neat, parallel rows of nipples makes it appear that NASA and Italy are preparing to launch the she-wolf who suckled Romulus and Remus into orbit!  Spectators should take the rare opportunity to suck on her space teats, because they dispense Tang!  But beware, because judging by the melting, Daliesque character on the right, the bright orange, granular milk produced by her lupine bosoms is hallucinogenic. 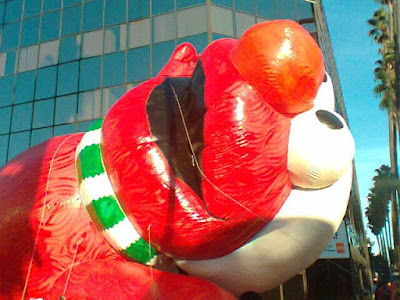 "Homer Simpson was found dead today, dressed in a dog collar and a Tickle Me Elmo costume, and trussed with an elaborate network of Japanese bondage-style ropes.  Auto-erotic asphyxiation is the presumed cause of death..." 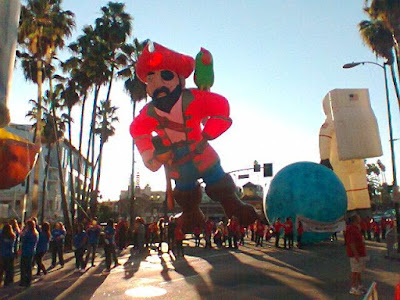 "A giant, gut-shot pirate is seen seconds before collapsing on a crowd of parade watchers in Hollywood earlier today.  Police are seeking a large, inflated assailant tentatively identified as Cap'n Jack Ruby..." 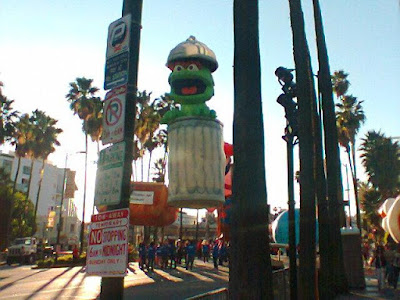 It's like Oscar the Grouch is jumping out of an R2D2 birthday cake -- in which case I'm definitely tempted to call Chippendales about a refund. 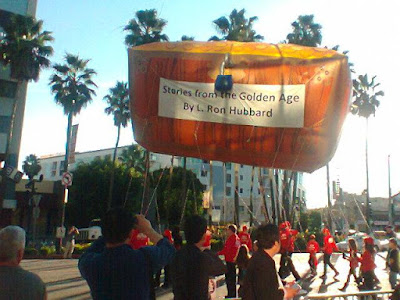 And what could better symbolize "Stories from the Golden Age By L. Ron Hubbard" than a gas bag that vaguely resembles a giant block of cheese? 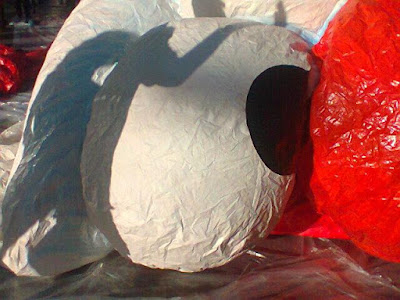 I can't decide if this headline should read, "A giant, crawling eye, best remembered as the star of the 1958 Forrest Tucker film The Crawling Eye, lost a knife fight, and a good deal of vitreous humor, today..." or, "The dessicated corpse of Snoopy has been discovered, beneath the floorboards of an abandoned artist's studio in Santa Rosa, California..."

Anyway, I'm sure you guys can come up with better captions, so have at it in comments.
Posted by Scott at 3:56 AM

Email ThisBlogThis!Share to TwitterShare to FacebookShare to Pinterest
Labels: For No Good Reason, Happy Holidays, Hollywood

Nothing like a "knife in the eye" joke for some vitreous humor.

I think I can hook you up with a free Scientology personality test, Scott.

I completely lost it when Old Brother Hubbard's Cupboard came sailing by.

Younger folks may need to be reminded that Elron was a science fiction author of some repute-- yes, of the "Golden Age" of pulp sci-fi-- before he found a better racket in the "Dianetics" cash cow (and took a number of perfectly good other science fiction authors with him, according to Isaac Asimov).

At least I hope that what's the "Stories From the Golden Age" label refers to, and not some creepy-ass Scientologism.

Elron Hubbard in a box!! Balloons? I had no idea. Thanks, Disney. Keep America cheesy.

Always hated that parade: it can screw up traffic into Silver Lake, & was like a touring company of "Podunk on Wheels," but (mercifully) I haven't been w/in a country mile of it for a few yrs. now & it hasn't been live on local tee vee for a while either, so it slipped the mind. You look away for just a second ...

Is Santa's Scientology Village back this yr.?

Yes it is, M. Scientology Santa is open for business in the "L. Ron Hubbard Winter Wonderland" on Hollywood Boulevard, taking the little thetans onto his knee and asking them which volume of Dianetics they'd like for Christmas this year -- New Revised Paperback, or Special Leather-bound Edition with Attractive Slipcase -- while the on-site carolers sing "Once Upon a Midnight Clear."

ALL inflatable figures are disturbing. It's their whole goddam raison d'etre.

That last one is so amorphous..
"Recently fertilized egg seeks dependable placenta - - aaahh!"

I am the eye
Eat IQ pie

Mentis, honey, sometimes I worry about you... But not for your taste in flix, obviously... Can't top "Black Sheep"!!

All I can say about the Elron shit is total and utter stupefaction and shock, that the city not only allows, but also CONDONES those FREAKSHOW FUCKTARDS setting-up their brain-washing fetish booths on public property and to participate in the fucking parade!!

What, their "Lay Ministers" didn't cause ENOUGH of a FLAMING FUCKING *CLUSTERFUCK* at the LSU Vet School Emergency Animal Shelter @ the rodeo/livestock show arena after Katrina!?!?!? I fucking GREW UP in that Parker Coliseum, and to see those bug-eyed fucktards driving hurricane evacuees absolutely INSANE with RAGE, when all they wanted was to LOOK FOR THEIR FUCKING PETS --- I was beyond disturbed. THOSE useless-as-tits-on-a-boar-hog idiots showed up en masse around the same time that FUBAR FEMA swooped-down and TOOK OVER and FROZE THEIR ENTIRE OPERATING BUDGET AND PETTY CASH. That poor woman in charge was about to spontaneously combust, bless her heart. Thankfully, because of the hundreds of kind people who kept sending money down here, I was able to put a nice little stack of cash into her hand, just enough to keep her from having to kill the motherfuckers, and it made her week.

Scientologists don't fucking "HELP" when they show up, they FUCK IT UP SO MUCH THAT THEY MAKE FEMA LOOK "GOOD"!!!!!! Fuckin' idiots.

(Is it some kind of omen that my super-secret decoder-ring word is "RE JAW"???)

The neat, parallel rows of nipples makes it appear that NASA and Italy are preparing to launch the she-wolf who suckled Romulus and Remus into orbit!

Three words for ya:

Hey, Anonymous pussy-fart: Grow a pair and SAY SOMETHING, or get the fuck off of our soap box, ya shriveled-up little stack of dimes!!!