I was listening to the Fat Guys At The Movies podcast ("Episode 238, King Kong vs. Dirk Diggler"), featuring our friend Ike (of the Pop Culture guru duo Mike & Ike), and the conversation turned to Tarsem Singh's Immortals -- which, if you've turned on a TV or sat through the trailers in a movie theater lately, you've probably been unable to avoid knowing exists, and which opens today.

Now, we have a rule against doing BLTBM-style reviews of films while they're still in first run release -- an easy guideline to follow, since most of the movies we write about don't linger (or malinger) long at the multiplex.  Still, we're occasionally tempted to break Ape Law, and this picture looks particularly juicy: willowy young men pirouetting madly in pleated miniskirts, bronze-clad warriors attempting and failing to organize a phalanx in zero-gravity, and Mickey Rourke sporting a rhinestone-studded hockey mask and muttering "Releez da titans," like a bleary-eyed Redwings fan hunched over a bar after ordering five too many boilermakers.

Anyway, Ike reminded the audience that one of Tarsem's earlier, funny films was The Cell, which, coincidentally, is featured in the Psycho Therapist chapter of our currently-under-construction sequel to Better Living Through Bad Movies.  So please enjoy this preview of coming attractions.  The review is by s.z.  The cantilevered butt cheeks are courtesy of Jennifer Lopez. 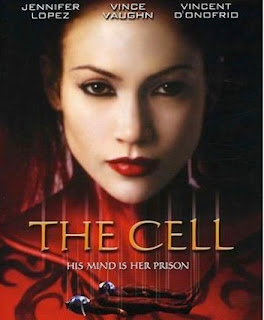 The Cell (2000)
Directed by Tarsem Singh
Written by Mark Protosevich


Tagline: "This summer... enter the mind of a killer."


And as an added bonus, enter the mind of a Jennifer Lopez!  As you might imagine, it’s full of expensive, bizarre clothes, MTV videos, and a violent man in trouble with the law. Plus, lots of derriere jokes!


The Dreamscape/In Dreams/What Dreams May Come part our movie begins with Jennifer of Arabia riding her horse across the sands while wearing a wedding gown she apparently borrowed from Harvey Birdman, Attorney-at-Law.  See, Jennifer is a child psychologist thingy who, through the marvels of unexplained science, can enter the mind of her patient, a catatonic kid who hates water.  Her therapy sessions consist of her donning a red rubber cat suit (ribbed for our pleasure), getting hooked up to a Playskool My First Matrix machine, then invading the boy’s subconscious to urge him to Just Say No to schizophrenia.
Jennifer, a highly trained mental health professional, says earnestly, "He’s living in a world that’s not healthy," and wants to reverse the polarity on the mind-melding device, which, as we know from Ghostbusters, is highly dangerous.  Her scientist colleagues shoot down the idea, so Jen goes home and smokes pot in her underwear, while generously shoving her butt at the camera.  The scientific community's argument is now invalid.
Meanwhile, in the Silence of the Lambs/Seven/Swingers portion of our movie, FBI agent Vince Vaughn, looking like he’s suffering from a serious case of cotton-mouth and dope lag, is trying to locate an appropriately bizarre serial killer to spice up the movie.  Vince just got his big break in the case: a dog hair, which DMV records indicate belongs to Vincent D’Onofrio.  But just seconds before Vince breaks down the door, D’Onofrio takes a bath, which causes him to have a seizure, rendering him totally catatonic.
Even worse, Bad Vince grabbed a new victim while Good Vince was waiting in line at the DMV, and since the girl is trapped in Bad Vince’s automated aquarium, she will drown within a few hours. To add suspense to the movie, why don’t you hold your breath until the girl is located? (Full disclosure: We tried this and passed out several times, but feel that our ability to appreciate the director’s singular vision was only enhanced by the hypoxia and serial concussions.)
Vince takes Bad Vince to a specialist in bath-tub related disorders, who says that he is suffering from a rare form of schizophrenia triggered by a trauma involving Mr. Bubble....exactly like the kid in the first part of the movie.  What are the odds! The doc explains that drugs can’t help and the catatonia is permanent, so it looks like the girl is doomed.
Vince asks Jennifer if she can get the girl’s location from the mind of the killer.  She wrinkles her brow, looks puzzled, and in her best Melanie Griffith voice states, "For severe schizophrenics there's no difference between fantasy and reality."  Yup, Jen is one of the nation’s most gifted psychologists — and probably attended the same institute of higher education as Dr. Christmas Jones, the 22-year-old world-renowned nuclear physicist/underwear model in The World is Not Enough.
And that brings up a very important question: what would Jennifer’s Bond Girl name be? We lean toward "Professor Bébé Gottbach, Ph.D." -- but feel free to come up with your own.
Anyway, Jennifer enters Bad Vince’s head, sees a boy, and follows him to a barn.  He pushes her away from a horse just as panes of glass fall from the ceiling, sectioning the animal into a science project ("the living horse’) or into steak for the Black Angus restaurant chain.  This symbolizes the damage done to D’Onofrio’s young psyche by the theme song from Mr. Ed.
Suddenly, she encounters a king wearing a purple cape that extends for miles.  Jennifer is horrified, because the cape makes his butt look really big, and her contract contains an ironclad No Compete clause.  She signals to her colleagues that she wants out of Bad Vince’s twisted mind now!
Good Vince asks her to go back, since she didn’t come up with any useful information except that Bad Vince -- in the tradition of movie serial killers like Leatherface, and Buffalo Bill -- murdered King Friday and is wearing his skin.
For Dr. Jennifer’s encore appearance in Bad Vince’s mind, the director, remembering his acclaimed "Losing My Religion" video, has D’Onofrio dress like a demon (you know, Clown White greasepaint, two pigtails dangling from his forehead, and a pair of brass rings pinching his nipples, which I bet his wife is going to be irritated about when she goes to wash her hair and notices the shower curtain is sagging).  Then Bad Vince licks Jen, which suddenly convinces her that his world is reality, just like the foreshadowing said would happen!  The scientists are powerless to help her because turning off the equipment now would cause them to lose their Quake game.  But Vince remembers the third rubber cat suit, and prepares to barge into D’Onofrio’s subconscious too.  The scientists advise him that the way to snap Jennifer back is to "Hit her with something personal," like Mr. Blackwell’s Worst Dressed list.
Vince sees a rainbow of fruit colors, eats some Skittles, and then encounters Jennifer, now wearing a skimpy black lace outfit, orthodontic headgear, and Queen Amidala’s hair.  She smiles cruelly as D’Onofrio pokes a hole in Vince’s tummy and pulls out his intestines, using a Ronco device made just for that purpose ("And boy, does it catch intestines!"). Vince remembers the scientists’ recommendation and confronts Jen with something painful from her past. "You were in Anaconda!" he yells, and the shame frees her—unfortunately, to make Gigli.

"You'd tell me if I looked stupid, right?"
Vince spots the logos on the machinery holding Bad Vince’s mind together and deduces where the girl is being held.  So, with Jennifer rescued and the case solved, his work here is done. However, Jen knows there are more cool outfits for her to wear, so she locks the doors to the lab, reverses the polarity on the machine, and joins minds with Bad Vince again.
This time she finds herself dressed as a nun playing Santa Claus in an Obsession ad. She beatifically tells the boy that she came back to help him like she promised.  Then D’Onofrio appears, now made-up like Dirk Benedict in Sssssss.  Jennifer changes into a black leather cat suit and black lipstick and wails on Bad Vince while shouting the diva’s traditional battle cry: "My world, my rules!" And her chief rule is: nobody upstages me and lives!
She stabs D’Onofrio repeatedly, but he merely smiles, demonstrating that even in her own mind Jennifer is an amazingly feeb.  So she changes back into the nun outfit and drowns the boy, which is shocking unless you went to Catholic school.
It’s several days later. Vince, more lethargic and hungover than ever, is at D’Onofrio's house, looking for loose change.  Jennifer shows up, looking for closure.  Vince tells Jennifer he remembers only pieces of his experience with her, and says something about a "drug-fueled mind-bender," which, coincidentally, is how Jennifer would later describe the experience of being trapped in an elevator with Paula Abdul.  They half-heartedly say thanks and good-bye.  Jen goes back to the Vogue shoot in her young patient’s mind, while Vince returns to FBI Headquarters to file his report and smoke a bowl of Super Lemon Haze with  Efrem Zimbalist, Jr.  Finis.
Posted by Scott at 12:23 AM

He pushes her away from a horse just as panes of glass fall from the ceiling, sectioning the animal into a science project ("the living horse’) or into steak for the Black Angus restaurant chain.

I'm guessing Damian Hirst would be thinking "lawsuit" if he makes it this far into the movie.

Well, OK then. Somehow, I remember liking this movie when it came out. Maybe I did more drugs back in those days. Yeah, maybe!

Fun fact: I spent a good part of my life in and very near to Comisky Park, home of the Chicago White Sox. I was there when the new Comisky Park was built; even have a brick from the old one. That park was later renamed during sponsorship sellout mania to be U.S. Cellular Park, which I will never call it, fuck you very much. Wait, here's the really fun fact! Clever Sox fans have proceeded to call it just... The Cell!

See? It all ties in. Wheels within wheels, man.

Damien Hirst is just the tip of the iceberg. I'm amazed that this movie wasn't litigated into oblivion by the dozens of contemporary artists and photographers it blatantly cribs from. I think the filmmakers just went down to the local Barnes & Noble, cleared out the contemporary art shelves and said, "Let's just do it like this and call it a day."

And that brings up a very important question: what would Jennifer’s Bond Girl name be? We lean toward "Professor Bébé Gottbach, Ph.D." -- but feel free to come up with your own.

Obviously, I'm gonna have to smoke a WHOLE LOTTA dope before watching this movie. Not that it won't be a painful sacrifice, or anything.

Well Cat, Vince clearly smoked a whole lotta dope while making it, so...