Dear reader, cherish the thought should you choose to continue: No Mayor of the City of New York has ever been successful in a bid for higher office.

It's either an optimal steady-state solution to a turbulent non-linear surface, or perhaps dumb punk luck.

But whatever it is, let us rejoice such that our odds against it ever occurring are so favorable. 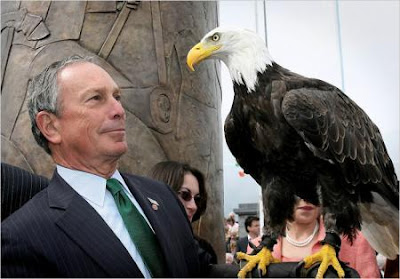 "So...am I supposed to pardon this turkey, or what's the deal?"

There is nothing unusual about media barons buying government. Mayor Mike is a media baron. His personality is perhaps a bit dull compared to those of Chandler, Hearst or even the Sulzbergers, but intellectually ingenious for the early embrace of electronic publishing, as well as the velocity of information through the Bloomberg data corridors.

Global trades of equities, commodities and foreign currency exchange are all informed by the rigorous data mining capabilities of Bloomberg's portal.

But unlike his competitors, Rupert Murdoch for example, Mayor Mike isn't at all concerned with pushing Flintstones reruns to Tirana, Albania via cheap Intelsat allocations acquired on the fly. This is some other kind of data, bits, bytes and hexadecimals determining the flows of capital through global exchange of contracts, legitimate or otherwise.

Mike's only competitor in this arena is the Thomson Reuters publishing empire.  A per-person monthly subscription to either product will set you back about one thousand eight hundred US dollars. The Flintstones are loss-leaders for all the Murdochs or Mordors out there carpet-bagging the developing world. Compared to Mayor Mike's personal take per transaction, it's nothing but stale peanuts.

To Be Continued in Chapter 2: When Electrons Collide!  At This Same Theater!
Posted by Scott at 3:21 PM

That bird can't be a turkey. And that thing on the left can't be a "public servant" in the traditional sense. Mike is lucky the creature didn't tear into his face. Similar encounters with other animals have occurred. We'll get to that later.

I used to use a Reuters dealer when trading FX forwards.

It was like having two-way internet chats before the internet got underway.

(Also, everything was printed up on paper, too. One needed to keep that in mind while blabbing away.)
~

ATTEMPT #2 TO POST IN THE SHIT-HOLE KNOWN AS GOOGLE:

Is it just me, or was everybody else hoping that the eagle would just fucking EAT HIM?!?!?!

He's a fucking ELF. That apex predator raptor could take off with him in its talons and roost atop the Chrysler building, feeding his beady little eyes to its young without even breaking a SWEAT.

And somehow, though I know little about The Little Mayor Who Couldn't (and wish that I knew less), the expression in his ferrety little face seems to almost grok that inevitability, hence the enjoyability of the photo.

Keith :
Also, too. Berlusconi.
But I interrupt. Please continue.
Suezboo

There are parts two and three to this article. Just wait. Animals do attack Mayor Mike in a rather savage manner.

I wish I could work Berlusconi into this narrative. Perhaps there is a connection. Until then, I wish you all "Bunga, Bunga."


Whattayathink, ya talkin' to a buncha fuckin' MISSIONARIES HERE?!?!?!?

Mike laughs from his Bermudan perch.

If you ain't takin' stowaways with ya, shaddup already.

And whether in Bermuda or NYC, that eagle could SO take his ass!!! And then drop him onto Rockaway Beach in hopes of cracking-open the bitter exoskeleton to get to the sweet, sweet seafood inside...

"Bunga bunga" is a reference to the reportedly salacious, scandalous sex & drug parties hosted at various Berlusconi villas, parties which it is alledged that under-aged teen prostitutes were recruited for pole-dancing and whatever. When Berlusconi resigned from office, I wanted to discover the origins of the "Bunga bunga" and found a plausible reference on Wikipedia. Be sure to click through to the HMS Drednought hoax featuring a very young Ginny Woolf and her brother Adrian.

Mayor Mike is far to dull for the "bunga bunga" lifestyle, but again stay tuned because he has some friends who perhaps flirt with it.

I dunno if I wanna click-through on that one, if there's no reference to the "death by bunga-bunga" missionaries-to-Africa joke. Dated as hell, probably stolen out of an old issue of Sex To Sexty, the MAD Magazine for interminably-immature perverts.