I'm going to be out most of the day, but I didn't want to hit the road before reminding everyone that today is the natal anniversary of longtime Crapper AnnPW of Beginning to Wonder (one of my favorite blog titles).  She's probably out too -- in fact, you're probably not even reading this -- nevertheless, please join me in wishing Ann a very happy birthday! 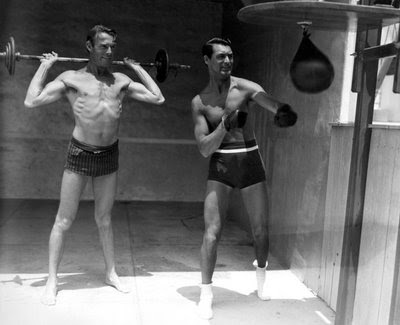 And to get things started off right, here's a photo of Cary Grant and Randolph Scott working out at the beach house they shared in Malibu for ten years, before finally succumbing to studio demands that they stop showing up together at movie premieres and nightclubs, and get married.  But not to each other.  Grant married Virginia Cherrill, the blind flower girl from Chaplin's City Lights, reasoning that she'd never know if he was in the room or not.  Sadly, he discovered she'd only been acting blind in the film, and Grant began to distrust this whole "magic of the movies" thing, leading to his early retirement in 1966.

Anyway, they look pretty carefree here, and I hope Ann is having a similarly happy day.  After you've signed the card, don't forget to check out Keith's Labor Day Special below, in which he has somehow managed to find the only Antipodean Oligarch more loathsome than Rupert Murdoch.

Update:  The calendar-savvy Bill S. points out that Ann shares her birthday with the sublime Eileen Brennan, and asks if we can dig up a clip of the latter singing "La Vie en Rose" from the sublimely ridiculous The Cheap Detective.  Here you go, Bill!
Here you go, Bill.
Posted by Scott at 12:41 PM

Have a Most Excellent Birthday.
Among the people who get to share your birthday:
Kitty Carlisle
Eileen Brennan (Scott, if you can find, and embed the clip of her singing "La Vie En Rose" in "The Cheap Detective", I will be ever so grateful.)
Valerie Perrine
Pauline Collins ("Shirley Valentine", "No Honestly!")
Alan Ladd ("Shane, come back!")
Al Jardine (member of the Beach Boys)
Irene Papas
John Fugelsang (funny human)
Adam Curry (MTV "Veejay" from the days MTV played music, owner of a Most Glorious Mane of Golden Hair")
Merritt Butrick (remember by "Star Trek" fans as Kirk's son, remembered-fondly-by me as Johnny Slash on "Square Pegs". Died tragically young, of AIDS in 1989)
Charlie Sheen (no comment)

Happy, happy day to you, Ann! May you have a long, happy and healthy life.

Wow, what a collection of actors born on this innocent date, though it is 9 months after the depths of winter so there may have been a lot of acting out in the winter.

Not much doubt that the pic shows Cary Grant who came from a circus family and was very athletic. Didn't know he was gay, as opposed to Rock Hudson.

Quite an amazing collection of people sharing your birthday. I share mine with Orly Taitz, and if that doesn't kill astrology forever nothing will.

(Okay, I share a birthday with TV's Frank too.)

Oh, shoot, that means we just missed it. Well I'll put August 30th in the birthday tickler file for next year, Doc.

And hey, if there's anybody else I've missed, post your birthday here. I lost a lot of them when my last computer crashed.

Thanks to all for your kind birthday thoughts (and to BillS for the Eileen Brennan request - Excellent!). I had a lovely day, not least because it was spent away from my computer, but which meant I couldn't say "Thank you" on the day this was posted. But Thank You, Day After!

Happy *exceptionally* belated birthday, Ann. Remember, you don't have to stop the party till the last idiot you know finishes singing the birthday song at you. ;-)

And to you D. Sidhe -- your post was too fabulous and the comments are off, but hopefully you'll see this anyway.