Today is the natal anniversary of Ivan G. Shreve, Jr., and we're gonna party like it's 1939! 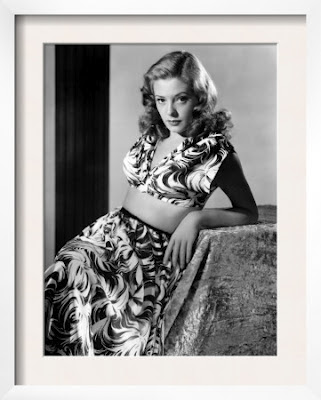 World O' Crap and Ivan's online homestead, Thrilling Days of Yesteryear, have a Special Relationship, much like the U.S. and the U.K., inasmuch as Ivan has been around this blog nearly as long as I have.  Not only was his one of the earliest names to turn up in the comments at the old Salon address, but he was also Sheri's first-born blogchild, recognizing her unique contribution to the National Debate and thinking, "I can do that.  Well, not exactly that...I mean, she's got the Regrettable Food, Subliminal Family Circus, and Wingnut beats fairly well covered, but I've got a few cherce remarks to make about bad movies myself.  Plus Old Time Radio, TV series dating to the era of drug store tube-testers, and the regional snack foods of Appalachia.  Not to mention, this mysterious s.z., Lord love her, has left the plum chance of weekly Mayberry RFD blogging just hanging there, ripe for the picking.  At last, it's Howard Sprague's turn to shine!"*

Ivan is a good friend and a fellow of sterling character, whom Doghouse Riley once called "the last honest man on the Internet" (I don't remember the precise context, but I assume this encomium was inspired by Ivan having hooked him up with graymarket copies of Whirlybirds or Frontier Circus).

He's also one of my favorite writers.  Witty, opinionated, and incredibly well-informed, Ivan somehow manages to make you laugh or thoughtfully stroke your chin while he sneakily infuses you with little known facts about 20th Century pop culture.  It's amazing -- his blog literally softens your hands while you do the dishes!

And I'm not the only one to recognize this, since he was recently hired to blog professionally at Radio Spirits, where the frequent confluence of Golden Age movies and Old Time Radio allows him to write about both.

I don't link to TDOY often enough, probably because, as it's one of my daily stops (did I mention he's also prolific?) I just assume most Crappers are already reading him.  But if you aren't, now is a great time to jump in.  One of Ivan's specialties is deconstructing old movie serials (which reminds me, I really need to bite the bat and finish the 1943 Columbia Batman), and his current subject, also a product of Columbia is:

The Adventures of Sir Galahad.  Boldest Knight of the Round Table! 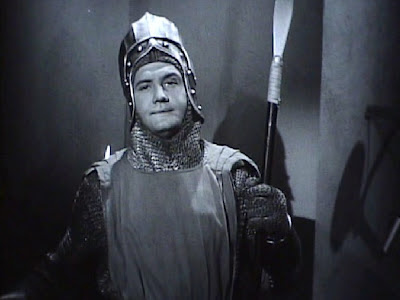 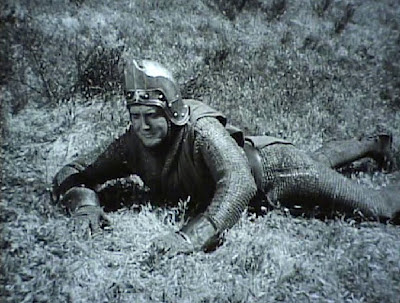 But I bet George was.

*Ivan's Internal Monologue not guaranteed verbatim.
Posted by Scott at 12:02 AM

Happy Birthday and may all your test patterns be vibrant!

A very merry Shrevemas to you all.

One of these days, I gotta get to know you better, but in the meantime, know that drinks are on me, at the Prime Time Pub in Hollywood, if you ever make it to the west coast. I owe ya one, and many more, for the wonderful work you've done at Thrilling Days of Yesteryear.

Anyone reading this who hasn't been over to Ivan's place, well, you're missing the good stuff, some of the best the tubes have to offer.

Happy Birthday, Ivan, and many, many more, please.

Scott writes: which reminds me, I really need to bite the bat and finish the 1943 Columbia Batman

If I recall, we left the Batman as a pack of Chesterfields escaped his utility belt one by one, as he climbed a wall with his BatRope, which was faithfully recorded for posterity by either the laziest director ever, or the insistence of the laziest actor ever, who said, no, I ain't climbing the damn wall again, anybody got a cigarette?

Happy birthday and a long gracious rest for your eyes, Ivan!

BTW, that first photo from Galahad...please say that's a still and not the PR shot. I can already see the seeds of Reeves suicide in his "Oh, god, why did I agree to this? I'm firing my agent!" expression

Carl, if I was asked to caption the first photo, it'd be easy:

likewise, Happy Birthday! which you also share with Amanda Marcottte from Pandagon/Mouse Circus

Thanks for the photo replacement. Jane's a lot easier on the eyes. TDOY is a fave and if it weren't for WO'C I'd be clueless to what's out there. We're also fond of radio plays around here, so might I suggest the IJBC fanclub (Jack Benny)? Yes, Benny! They have a treasure-trove of all the NBC & CBS radio broadcasts. Send them a CD and small fee and they'll answer.

Man! With a tribute like that I'm almost dreading Bill Conti playing me off...

First, let me address a few things brought up in the comments...

Carl -- both of those Reeves photos are screen captures from the serial. George's "It's a livin'" expression is actually his reaction to someone slipping him something in his wine. (The second one is choice, best captioned "I've fallen...and I can't get up...")

Chris Vosburg - If I'm ever lucky to find myself on the West Coast, I will take you up on your offer. (I'll also have to make a pilgrimage to the In-and-Out Burger.)

preznit - Thanks for letting me know that! I should Twitter her happy birthday.

Keith, heydave and everybody else -- thanks so much for the birthday wishes. I... (music starts) Uh oh...gotta go...World O'Crap audiences are the best audiences in the world! G'night everybody!