A Movie That Boldly Says, "Flux You!" 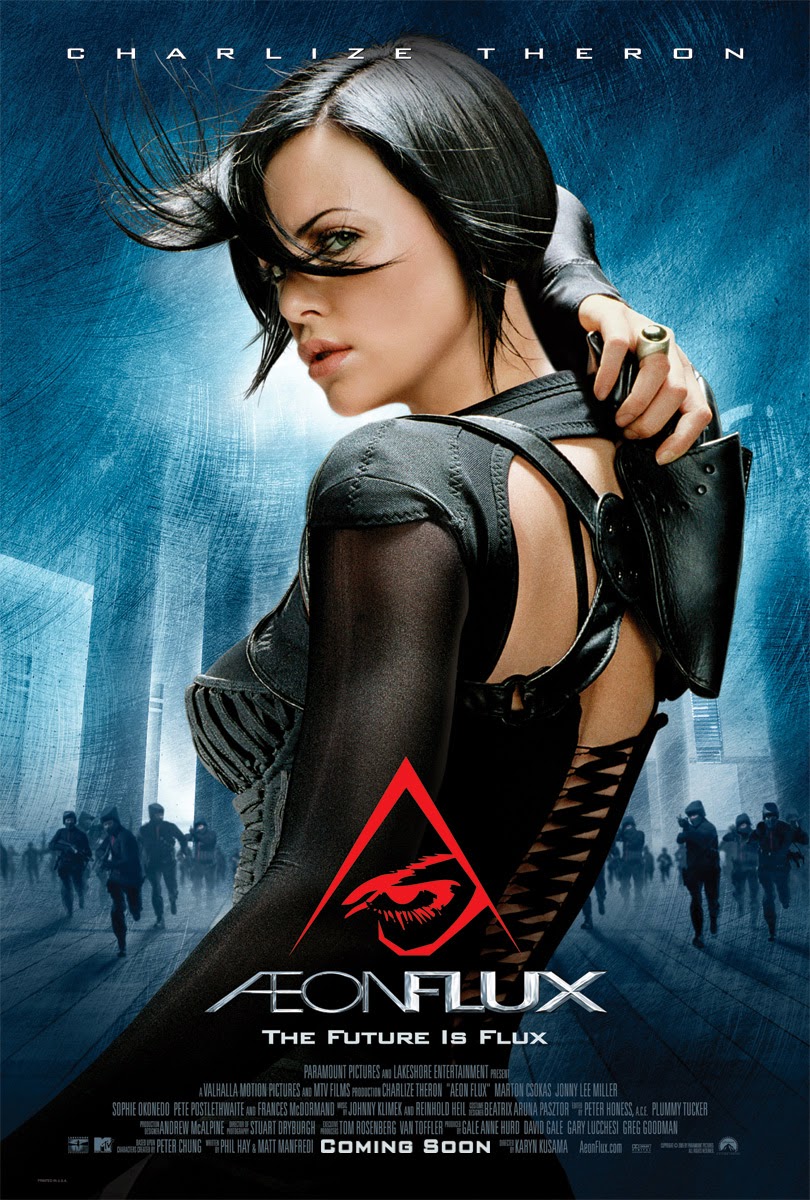 
Science fiction films about dystopian futures are legally required to open in one of two ways: either a narrator tediously explains how the world ended, or – as in this case – the movie just texts you the back story.

“2011: A virus kills 99% of the world’s population.”  But since we’re still alive, we must be part of the 1%, so excuse me while I go build an elevator for my cars and off-shore some manufacturing jobs.

“A scientist, Trevor Goodchild, develops a cure.” But then he quits virology when he gets a better offer to appear as a Bond Girl.

“The five million survivors live in Bregna, the last city on earth.” As civic mottos go, “The Last City on Earth” is no “Gateway to the Salton Sea” or “Home of America’s First Wave Pool,” but it has its advantages. For instance, your baseball team is guaranteed to win every game against their traditional rivals, the Second to Last City on Earth, albeit by forfeit. Anyway, the Bregna Rotary Club meets Wednesdays at noon, Jaycees and Oddfellows on Fridays.

“The Goodchild dynasty rules for 400 years.”  So if you develop a drug that everybody desperately needs, you get to become Pharaoh, which explains the millennia-long struggle between the ancient Viagra and Rogaine dynasties.

“Rebels emerge to challenge the Goodchild regime.”  They would have liked to have fought back four hundred years ago, but they had to wait for the emperor’s drug to go generic.

Cut to 2415. Aeon Flux (Charlize Theron) plucks a bluebottle fly out of her false eyelashes and breaks into voice over: “Some call Bregna the perfect society. Some call it the height of human civilization…”

Hey, no fair! We did the reading! Why do we have to sit through a lecture too? Do we have a substitute today?

Okay, fine. She goes on for awhile, so let me just sum up: Bregna is a Rose Bowl-shaped city in the middle of a jungle, and populated by white people in lounging pajamas.  We know it’s a totalitarian dictatorship, because anyone caught wearing a Doctor Who scarf is arrested on sight, but a group of rebels (called “The Monicas” after their favorite character from Friends) strike back by wearing vaguely fetishy black vinyl raincoats. When Aeon isn’t tweezing insects from her eyelids, she is one such rebel, and fights the power by strutting around town in thigh highs and a hoodie made out of a screen door.  She meets another Goth pedestrian and instantly they lock lips; we zoom inside their mouths like it’s a toothpaste commercial and watch as the male’s tongue pushes a ball bearing down her throat, which I imagine in the future is an activity recommended by four out of five dentists. As Aeon’s stomach acid begins to dissolve the ball bearing, we see that it contains a tiny Frances McDormand, who orders her to go break into the Goodchild NSA.

Aeon has a boring conversation with her sister, then puts on her whitest suit for the burglary, does a compulsory gymnastics routine, and lowers herself into the nerve center of the Goodchild surveillance state, which turns out to be a gigantic talking toilet. She discovers that the snooping potty recorded the conversation with her sister, despite how boring it was, but manages to scrub the data using a high tech Clorox Toilet Wand. Then she flushes twice, because it’s gonna be a long movie.

Aeon heads off to dinner with her sister, who is in the midst of slicing up some extremely art directed fruit when she’s suddenly interrupted by two bullets in her face. Unlike the bluebottle fly, these prove more difficult to remove, so all Aeon can do is another voice over. “I had a family once. Now all I have is a mission.”  And an intestinal blockage in the shape of Francis McDormand.

As it happens, the talking polyp from Fargo has another assignment for Aeon: break into the Citadel and assassinate Chairman Goodchild (who appears to be the same guy who invented the virus cure four centuries ago, so apparently he’s immortal). At least, I think she’s supposed to kill him; the briefing is kind of vague, as it consists of McDormand regurgitating a flower, then blowing pollen into Aeon’s eyes. Which proves just what a bad-ass our heroine is: because not only can she do cartwheels and operate indoor plumbing, she also has a high threshold for seasonal allergens.

Francis warns Aeon that the “underground interior has been built to be confusing,” just like the plot, but gives her a schematic of the Citadel, and when I say “schematic” I mean “a rash on her forearm that looks like the New York City Subway map,” so just as long as Aeon doesn’t take Benadryl during the break-in, she should be fine.

Francis concludes by promising, “Do this, and you’ll have your revenge. And we’ll all have our victory.” The war will be over, and you’ll be able to poop me out like a tapeworm.

Aeon teams up with Sithandra, an exotic-looking black woman with hands for feet (but not feet for hands), and they run through a garden of brass ballcocks that shoot darts, but not very well, because they all miss. It’s not really the ballcocks’ fault, though, because the two women are doing backflips, and as any action film fan knows, this makes you impossible to hit with a projectile, even if you’re backflipping directly into the line of fire, as Aeon does.

Aeon slips into the “underground interior” and immediately starts getting turn-by-turn instructions from her ulna.  She wanders for awhile, scattering ball bearings around like some kind of confused Johnny Appleseed, before finally tracking Goodchild to the stage of the Dorothy Chandler Pavilion where he’s practicing a speech in his pajamas.  Aeon walks up and points a gun in his face, giving Goodchild just enough time to decide he’ll ingratiate himself to St. Peter by opening with a joke (“This morning I was shot by a girl in my pajamas. How she got in my pajamas I’ll never know.”)  Then he calls her “Catherine,” which makes Aeon look frozen and panicky, as though she’s forgotten her line, and while she’s standing there waiting for the script girl to prompt her, one of the other characters gets bored and hits her in the head.

In a big twist nobody cares about it, we learn that Aeon and the rebels are being manipulated, and the person who actually arranged for the assassination of Goodchild was his own brother, Spoiledchild.

Aeon and Goodchild meet in secret so she can give him lip about having her sister murdered, and then they can have PG-13 quality sex.  The next morning she wakes up with a startled gasp, puts her knee on Goodchild’s throat and slowly chokes him to death while having psychotic flashbacks (this is why I don’t miss the dating scene).

Aeon finds a staircase and descends into the dark basement, because every time she chokes out a one night stand she likes to treat herself to a watermelon rind pickle.  Goodchild’s female bodyguard attacks Aeon with a machinegun, but she fights back with a bendable, posable crab spider that allows her teleport out of the basement into some other basement. As catfights go this one is short, weird, and inconclusive, but we do discover that Goodchild was only choked half to death. Meanwhile, Spoiledchild has taken over Rose Bowl City and ordered that Goodchild be arrested and executed for the crime of Mom liking him better.

Sithandra catches up to Aeon, bitches her out for choking her victim just enough to prolong his orgasm but not enough to actually kill him, and then they have a catfight which is also short and dull, despite the fact that Sithandra has four hands, which should make her a formidable hand-to-hand combatant, but in reality just seems to make her better than average at dangling from a trellis.

Later, Aeon climbs up a giant beanstalk and jumps onto a huge jellyfish that floats over the city like the Goodyear blimp.  Inside, she finds Pete Postlethwaite dressed like a Sand Worm from Dune. (He quickly disappears, so I’m not sure if this is part of the movie, or if he just accidentally walked in front of the camera on his way to a Comic-Con event.)  On the bright side, the Jellyfish tells Aeon that her sister isn’t dead, she’s just been turned into a baby.  (Personally, if someone offered me a choice between death, or experiencing diaper rash and strained apricots again, I’d be Jetskiing across the River Styx so damn fast…)

Aeon finds Goodchild, who explains that he cured the virus but accidentally made humanity sterile, so he’s been secretly cloning everybody for the last four hundred years while he tries to cure that.  The filmmakers, sensing we don’t really care, throw in lots of running and shooting and screaming and glass breaking and a nice ride on the people mover. Then Aeon and the wounded Goodchild take a refuge in a sewer of the future, and he says, “We need to get the bullets out” so she reaches into his chest hole and plucks them with her fingertips as though she were an arcade claw machine and he was riddled with kewpie dolls.

Pretending we still care about the plot, Goodchild reveals that he’s finally cured the sterility and Aeon’s sister was pregnant before she got recycled. Oh, and prior to cloning, Aeon was his wife Catherine, which is why she’s spent the film alternately banging and half-murdering him, because she has a genetic memory of marriage.

Spoiledchild orders his minions to mow down Aeon and Goodchild,  but suddenly the Monicas arrive. Aeon takes advantage of this momentary diversion by springing into action and getting every single one of her friends killed. But she makes up for it by crashing the Jellyfish into the Rose Bow and killing Pete Postlethwaite, which is very sad, not because he was a good character or had more than three lines of dialogue in the whole movie, but because when the costume designer showed him the Sand Worm suit, I bet he said, “I wouldn’t be caught dead in that!”

I'm too sedated (though never APPROPRIATELY sedated... *sigh*) to pay due & earnest court to my Empress OR my animated Heroine, Aeon Flux, so I'll save it for tomorrow, but thank you for reading what's left of my mind & providing FABULOUS raw ingredients for some LOVERLY dreams tonight!!!

I've often thought if I were going to write a sci-fi script it would be much more effective with the rule that you can't have any CGI effects in the movie. Then, you see, you'd have to focus on plot, characterization, dialogue and the nitpicky details that make this alternate world seem real.

In a big twist nobody cares about it, we learn that Aeon and the rebels are being manipulated, and the person who actually arranged for the assassination of Goodchild was his own brother, Spoiledchild.

Someone tell Highlights magazine that "Goofus and Gallant" is being ripped off.
~

It's on Showtime 2 tonight at 6:25 Eastern. Also currently on-demand at Showtime.

I've always avoided watching this film (from back before my crush on Charlize) because I *knew* that a "live-action"/CGI flick could NEVER compare to the original Liquid Television animation. From the commercials that I remember, it didn't.

Though the way-too-in-depth mouth-gymnastics sound QUITE a bit like the original... Though I was always a bit disturbed by the fact that Aeon's waistline was smaller than her HEAD.