An Open Letter To Jon Stewart

Not from me. I don't write open letters because I figure if the NSA wants to snoop on your correspondence so bad they should have to put the kettle on and laboriously steam open the envelopes the way the FBI did to MLK. Hell, I don't even open letters, because they're usually from bill collectors anyway.  No, this one is from our friend, and Internet Legend Anntichrist S. Coulter.

Note: I haven't eliminated the body of the letter, I've just placed it below the fold because it contains swears (no more so than The Daily Show itself actually, but I don't have that bleeping thing they use), and fonts of oscillating size and color, and I didn't want to take the risk of inducing epileptic seizures in Japanese school children. So read on...if you dare.


ANYBODY KNOW HOW TO FUCKING E-MAIL JON STEWART?!?!?!I've searched every fucking pixel of the Daily Show site, the CC.com site, everywhere but trying to find the guy's home phone number with one of those pay-for-pry "look up old friends!" sites that put everything but our fucking PAP SMEARS out onto the internet for the highest fucking bidder.
BUPKIS.
For tonight, (January 19) even though there are multitudinous reasons that I've wanted to torment the boy in e-mail for YEEEARRRSSS...  just one note:
As easy as it is to mock the less-human-than-Commander-Data-by-a-quotient-of-EIGHTY-THREE behaviors of John Kerry, the idiotic bit about his overly-enthusiastic handsy-grabby greeting w/the French President wasn't just a waste of billable air time (and not CHEAP air time, either, bucky!), it was HYPOCRISY.
For EIGHT FUCKING YEARS, we had to flinch, cringe, suppress our gag reflexes (and for some of us, that DOESN'T come naturally, even though it's a treasured highly-developed SKILL), and otherwise try not to be internationally grossed-the-fuck-out by Dumbya TONGUE-KISSING every single male leader HE.  EVER.  FUCKING.  MET.  For fuck's sake, he and Bandar were damned near playing TONSIL HOCKEY in the fucking ROSE GARDEN of OUR White House!!  Holding hands, playing grab-ass, you name it.  How many fucking times did the Cokehead-Barely-In-Chief-'Cause-Daddy-Had-Pull lean over to some male dignitary/emissary/leader and comment upon the BEAUTY OF THEIR FACES?!?!?  I lost count back before Cheney's last mechanical/software update whilst he recuperated in his "undisclosed location," i.e. his"NO LESBIANS ALLOWED!!" boy-basement. 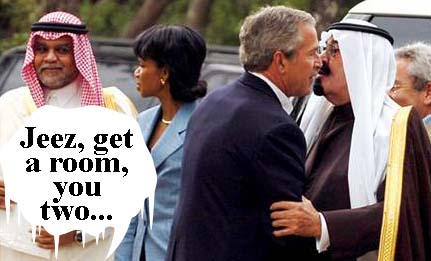 Every gay guy that I know/knew at the time was RETCHING IN REVULSION, not out of homophobia or the hypocrisy of Dumbya & his teabaggers' murderous hatred of teh gheyz, but because NOT.  A.  SINGLE.  FUCKING.  ONE.  OF.  THEM.  WANTED.  TO.  FUCKING.  ***SEE***.  THAT.  REPUGNANT.  FUCKING.  SHIT.  !!!!!!  Closeted, half-closeted, oft-visited (in threefers with KARL FATFUCK ROVE, OF ALL FUCKING DISGUSTINGLY-HIDEOUS PEOPLE!!!) @ 3:20A-ish, signed-in BY Rove, despite & against AAALLLLLL SECRET SERVICE FUCKING ***PROTOCALLS***, by an ONLINE-FOR-HIRE-MALE-"ESCORT"/PORN ACTOR WHO SHAMED THIS COUNTRY'S MILITARY BY PRETENDING TO HAVE "SERVED" IN THE UNITED STATES MARINE CORPS!!!!!!  The fucking Secret Service should've had the REAL NCIS indict his ass for THAT SHIT, ALONE!!!  YOUR TAX MONEY, HARD AT WORK...  OR, AT LEAST, AS CHEMICALLY-INDUCED HARD ENOUGH TO DRIVE A TEN-PENNY NAIL!!!  The links, the blog posts, the material is well-cached & documented AAALLLLLLL OVER TEH INNERNET TOOBS, Jon.  Won't take but about 2 minutes to research.
Republicunts ***still*** WANT TEH GHEYZ TO DIE OF AIDS, especially in AFRICA, which is why they give carte-blanche funding & permission to hate-mongering/PROJECTING-MUCH?!?!!?/gay-hating Murkin "fundamentalist alleged 'preachers' " TO GO ALL THE FUCK UP OVER & IN AFRICA AND WITH THE MORALS OF YOUR AVERAGE SNAKE-OIL/VOODOO/STOCK-MARKET SALESMAN, convince the natives to MURDER ALL TEH GHEYZ!!!  Activists, anybody who's brave enough to be out & proud in West African nations that have been infested & infected by Tammy-Faye-Bakker-wannabe sociopaths/illiterates/bigots  ---  DEADER'N HELL.  And much like N.O.P.D., Angola State Pen (LA, not the country), & every other crookeder-than-a-broken-dick SWINE in Louisiana, no, the "authorities" in most of the worst-infected West African countries DON'T TRY TOO AWFUL-HARD TO FIND THE MURDERERS/FLAME-WIELDING MOBS in question.  Shocked much?
These pseudo-"christian" (President Jimmy & Mrs. Rosalyn Carter are the LAST actual "christians" on this planet, son...), gloriously-intentionally-ignorant, bigoted, inbred mouth-breathers are the "people" for whom Dumbya diverted our CONDOMS-AND-SEX-EDUCATION FUNDING FOR THE U.N. ***TO***, THESE MORONIC CRACKER-ASS MOTHERFUCKERS!!!!!!  What, is Arkansas suddenly not BIG ENOUGH for all of these overbreeding-like-Duggars motherfuckers anymore?!?!?!  A LITTLE BIRTH CONTROL IN THE WATER SUPPLY IS NEVER A BAD THING.  (Unless, of course, you're a sterilized-without-your-knowledge-or-consent fiscally-screwed woman in Appalachia or the ENTIRE SOUTH during the Depression/New Deal and they promised to "cure your cramps/miscarriage/CLINICAL DEPRESSION" with SUCH A SIMPLE PROCEDURE!  But that's a whole OTHER federally-mandated genocide...  without even involving the Henry-Ford-inspired assembly-line prefrontal lobotomies...  and tragic as her life was, Rosemary Kennedy wasn't even REMOTELY the worst case of THAT gynocide...)
So.  Even though I never even WANTED to vote for John Kerry (and for my FIRST Presidential election, I was forced to vote for none other than BOBBLE-HEADED-DISAPPOINTMENT MICHAEL DUKAKIS, and not having been informed of his sexual proclivities/bullshit hypocrisies yet, I HAD WANTED TO VOTE FOR JESSE JACKSON, DAMMIT!!!  Yeah, I've been an atheist for a long time, and automatically distrust those who wear their cult on their sleeves, but I *thought* that Jesse could be trusted not to turn us into the paranoid-hypocrite-run theocracy that we inhabit today...), and will never be much of a fan, as he was handed the Secretary of State gig after Hillary's health issues intervened in her rather-respectable tenure (and hell no, I don't wanna vote for her, either; John Edward was the last and ONLY Democrat since LBJTO SO MUCH AS **BROACH** THE SUBJECT OF POVERTY IN AMERICA, LET ALONE TO FUCKING ATTEMPT TO ***ADDRESS*** THE EDUCATIONAL & NUTRITIONAL INEQUITIES IN OUR CASTE-SYSTEM COUNTRY, and of course, HE hadda go get caught with his dick in the screen door, worse than Bill Clinton, 'cause HIS WIFE WAS DYING OF FUCKING ***CANCER*** AT THE FUCKING TIME!!!  I don't hold out a whole helluva lotta hope for next year, unless we can convince homegirl Donna Brazile to get off of her highly-paid ass and run!!!)  ---  but really, Jon, weren't there about eighty-zillion MORE IMPORTANT things that you could've spent those 4-5 minutes of billable air time upon, like, oh, how that UTTERLY-UNCONSTITUTIONAL fucking law that Cheney passed as, I believe, an "executive order," managed to GRANT EVERY LAST NIXONITE WHO WAS STILL RUNNING THE GUBMINT ALL THE WAY THROUGH 3 DIFFERENT SERIES OF WAR CRIMES INCLUDING THE WAR ON THIS COUNTRY AS PERPETRATED BY THE SOLD-OUT SUPREME COURT  ---  Cheney made DAMNED SURE that he, Don Regan, Donald Rumsfeld, Dumbya, Rove, the whole fucking LOT of draft-dodging pussy-boys who don't necessarily LIKE pussy  ---  that no matter HOW MANY war crimes/crimes against humanity/DOMESTIC GENOCIDES {10th anniversary's coming, how ya gonna commemorate THAT?!?!}/felonies/embezzlement/no-bid-contract nepotism/Halliburton, Shaw Group & Raytheon-profiting wars that CHENEY INFLICTED UPON US/etc. --- that they are,unconstitutionally and QUITE ILLEGALLY, somehow "RETROACTIVELY legally protected from prosecution" going back to when their cherries were first popped by DKE paddles @ {pick-yer-not-quite-Ivy-League-school}...  INCLUDING WATERGATE!!!
If you're going to get all silly & girly over Secretary Kerry's social awkwardness, dear heart, GO THROUGH THE ARCHIVES and do a comparative study of Dumbya's tongue-lympics with every male that he encountered (well, UPPER-CASTE males & call-boys), especially his SEVERELY-intimate public displays of affection with "Bandar Bush."  Otherwise, couldja just cover something IMPORTANT, hon?  Thanks!

Thank you so much, sweetie... but since when in the FUCK have **you** ever been afraid/ashamed of CUSSING?!!??!

I don't ordinarily fear cussing; only when it's done with flair.


But, Scott, honey, I've never aimed the flamethrower at *YOU*!!!

Oh I know (and thank goodness!). I'm just intimidated by the ability to swear with flair.

And when I can afford Kinko's again, I'll inflict MY abortive attempts at same upon you... If you're skeered NOW, son, better prepare to lose eyebrows & facial hair... heh heh heh...

Whew, after that, I need a cigarette. Thanks, Annti!

Thank you, Thunder & Dr. I can't imagine anything more complimentary than the cigarette line... but then, smokes are on my mind lately, as the fucking anti-smoking nazis are trying to turn NEW ORLEANS ***BARS*** into NON-SMOKING GHOST TOWNS... so much for tourism!

Granted, *I,* personally, wouldn't miss the puking, pissing, misogynist fucktards who don't realize that there's a WHOLE CITY here, outside of the clip joints on Bourbon... I could go to the Quarter without having to pull my knife on yet another handsy Ohioan who should be retroactively aborted... or hillbillies from Tennessee, fucktards from Florida, you name it. I could actually go to a fucking PARADE again...

But then we'd be overrun with the anti-smoking fascist hypocrites who blaze-up the blunts/pipes/joints every fucking day, like THAT smoke is COMPLETELY FUCKING HARMLESS (about as "harmless" as New Orleans tap water!!!)... and I'd have to massacre an entire clusterfuck of granola assholes, and I really don't have the energy to dispose of all of the bodies these days. *sigh*

Sorry for the diversion, but thanks for enjoying the original rant!