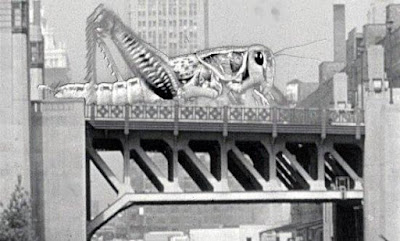 "A locust of radicalization." Does Cruz mean "locus," or he is talking about something from "The Beginning of the End"?

Scott: I wonder if Senator Cruz didn't Freudianly slip and accidentally reveal some personal information. Perhaps, like the Vincent D'Onofrio character in Men in Black, it's Cruz who's actually a locust, disguised in an ill-fitting human skin and preparing to lead a vanguard of alien insects in a conquest of the United States!

On the bright side, that would certainly solve our immigration problems, because who'd want to come to a country overrun with gigantic bugs dressed up in pantomime person costumes?  No one! I bet our tourist industry would go to hell too, and maps would quickly begin to resemble medieval cartography, where the edge of the known world was demarcated by an etching of a monster and the warning, "Here Be Dragons", except the U.S. would just be a big outline with a lovingly illuminated, if smirking, grasshopper and the legend, "Gives You The Willies", or "Here Be The Heebie-Jeebies."
Posted by Scott at 5:49 PM

Email ThisBlogThis!Share to TwitterShare to FacebookShare to Pinterest
Labels: Cult of Caricature, Elevating the Discourse

Wow, you can't trust Cruz to do anything properly, can you? The locusts (and they WERE pretty radical) targeted Chicago, not NYC.

I want to see some teeny smidgen of basic monster-movie metaphor competence from someone who aspires to have his paw hovering over the Red Telephone.

In the Apple, the reference is the mantis of fatwa, or the ape of extremism. That's pretty basic, Teddy-boy.

Because all of you most certainly need to know this, some scenes from that movie depicted them big grasshoppers marching along Lake Shore Drive, not far from where I grew up. My paper route was never that exciting in reality! (Not even counting that mean dog on the last block, a three story walk up: I had to creep up the interior stairs to the second floor, lean over the railing and throw the paper onto the third floor landing, then run like hell out the building as that thud usually woke the damn dog, who then chased me. Ahh, memories. I think I used to call my bike "Rosebud.")

A locust of radiation might have helped in "Plan 9 From Outer Space", which I've been featuring on the Saturday Matinee! :)