Here's an old yuletide ad from the days when Frederick's of Hollywood occupied a gorgeous Art Deco building on Hollywood Boulevard, and its Lingerie Museum (featuring the Celebrity Lingerie Hall of Fame) was the envy of curators the world over. (And if Horrors of the Black Museum had been set in Frederick's, and had featured Michael Gough lifting and separating his victims to death with a demi-cup "shelf bra," I think it would have gotten a lot more play in the late night rotation on Cinemax.)

The Lingerie Museum was looted during the 1992 L.A. riots (tragically, while it was hosting the "Treasures of the Vatican Underwear Drawer" exhibition, which featured Papal underpants that had never been seen outside the Lateran Palace before, including many fine bejeweled and brocaded jockstraps that made the Borgia Era Vatican seem like such a party school).  Also, it had some of those nutty cone bras that Madonna used to wear.  But the Christmas spirit prevailed when "[O]ne repentant looter delivered a bag of pilfered celebrity lingerie, including Ava Gardner's 'bloomers' and a push-up bra once worn by TV actress Katey Sagal, to the pastor at nearby Blessed Sacrament Catholic Church, Hollywood. An Austin newspaper noted that Blessed Sacrament's pastor 'may be the only priest in America to ever comfort a man who felt guilty about stealing celebrity bloomers.' In an article titled 'Support Is Generous for Bra Museum', the St. Louis Post-Dispatch noted that such an 'uplifting story could only happen in Hollywood.'"

Alas, Frederick's lost its Deco digs during the developer feeding frenzy that accompanied the so-called "Hollywood Renaissance," and is now just a museum-free storefront.  But we still have our memories, and an old catalog from 1967: 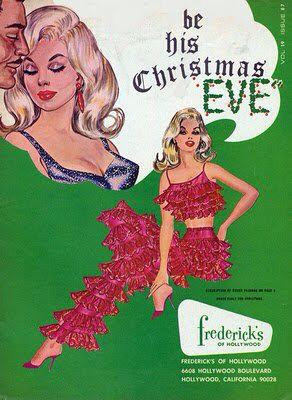 ...or at least be his Christmas Charo.

Back in Sixties, Santa, though middle-aged, was still Swingin' enough to be concerned about his virility, so he resorted to the same shoe-black mustache dye favored by Just For Men spokesmodel Joseph Farah, lest Eartha Kitt think he couldn't get an erection.  (Although the fact that he could go en pointe like a prima ballerina should be been all the proof you ladies needed that he was in peak physical condition, and the pipe he's brandishing clearly suggests he likes to get high, so basically it would have been like doing it with a man who combined the Adonis-like physique and Cheech and Chong-like stash of a Michael Phelps, with the raw sexual magnetism of a Denver Pyle.) 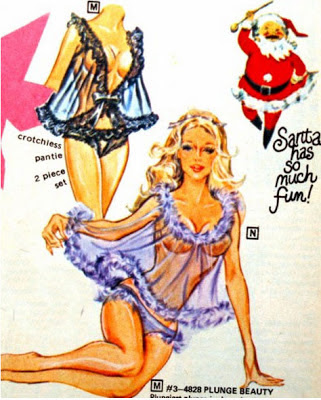 But the most important thing I learned from perusing old FredWood catalogs was that the The 50-Foot Woman, when she wasn't Attacking, was smart (note the glasses), married (note the rings), lazy (note the ad copy), and modest, but mildly amused, about being caught in the nude by a right jolly old elf, who I presume she flattened like a mosquito. 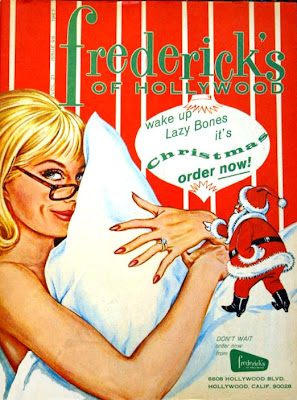 Due to the unexpected, but welcome job that dropped into Scott's lap this past week, he wasn't able to watch and deconstruct the traditional Wo'C Bad Holiday Movie, but we should have something up in the next day or so.  In the meantime, from Riley... 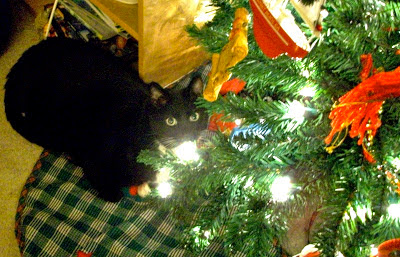 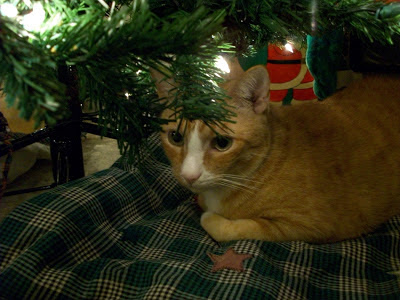 ...and the human staff of World O' Crap, have a very Merry Christmas (or War On same), everyone.
Posted by maryclev at 12:18 AM

Merry Christmas to all who celebrate. If you're spending the day with your family, my wish is for bottomless bottles of booze for you. It won't prevent the fights, but at least you won't remember them. If you're celebrating anything else, or nothing at all, booze is probably nice for you too. Happy day, all!

Can't wait to tease Scott-- Dude, your old lady's funnier than you.

Nice one Mary, and a very Merry Christmas to Clevengers and Crapheads all, and of course to She What Done It All: S.Z.

A very happy day to you, Mary and to Scott, Riley and Moondoggie too.And never to forget s.z. and all my mates here at Wo'C.
Have a lovely holiday.
Suezboo

I'm not sure about Santa's pointy toed boots or baton but then again if my sweetie was wearing style 'M' I'd probably be waving a baton too.

Merry Christmas to everyone!!!

Back atcha, Mary, kittehs & Crappers, and send Scott whatever warmth can pass through the USPS, and I'd like to reiterate my heartfelt wish to come back in my next life as Riley, or failing that, Moondoggie, even if I have to eat a shitload of catnip to get there... not that I'm complaining about that, mind you...

Happy Happy Hangovers to all and sundry, drink three for me, keep warm and/or cool, depending on your locality, enjoy them new prezzies and remember to recycle alla them sale circulars. Hopefully we can all hobble to sales tomorrow and find whatever our hearts desire, at 75% off retail! Or, y'know, send some $$$ to the Empire State Sandy Fund or what-have-you.

And bless you for the Fred's special, Mary --- of all the porn-get-ups merchandisers out there, Fred makes the most bullet-proof products, and are the only ones who remember women come in more than anorexic sizes! Though it's heartbreaking thought to know that yet another gorgeous Art Deco building bit the dust in favor of another STRIP MALL... *sigh* Alleged hoomins suck. A lot.

That's why it's always so good to come here and find Crappers who supersede all the failings of those so-called "people" out there.

Dr. Mike is/was running for president. I won't link to him, but here's a link to a KOS diary about his remarkable...

You are a brave, brave woman, KWillow. A flaming fucking MASOCHIST, but a brave one.