Shout out to all my Crappers.  Just dropping in to thank everyone, again, for the well wishes, friendly advice, adventures in opioids, and Christopher Walken trivia, and to update you on the Great Spinetacular of '13.  It's been two weeks since the injury, and while I'm still confined to the apartment (and sometimes the bed), there has been some progress, which I would cautiously describe as "baby steps" (in that I can now take baby steps without the cane).  I'm still only semi mobile and quasi modo, but I try to remind myself that I've been through this before, and eventually recovered.

In the meantime, Mary is trying to lighten the mood by emailing me Facebook ads, which apparently means we've reached that inevitable scene from a marriage in which the two parties are reduced to communicating entirely in memes.  (I'm no expert, but I believe this typically occurs after the point when a wedded couple begins to resemble their pets, but before they start to march around the mall every morning in matching velour track suits.)

Anyway...Are you a waifish, hydrocephalic refugee from a Walter Keane portrait?  If so, then you may be qualified to (become a) SOCIAL WORKER! 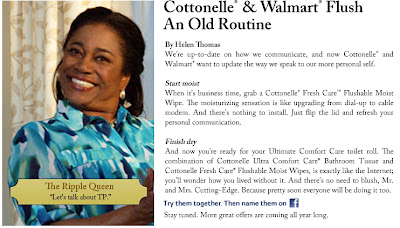 Finally, via the Fabulous Stacia of She Blogged By Night, a series of newspaper ads for the NBC fall line up from 1973, courtesy of Scenes From The Morgue (Banacek!  Police Surgeon!  Chase!  The Magician!  Diana Rigg in a sit com!)

And please check back in a day or so -- I hope to have some new movie stuff for you.
Posted by Scott at 8:20 PM

Glad to hear you're doing a bit better, Scott.

Please, please, please tell me that the writer of that execrable piece on moist wipes isn't the real Helen Thomas. That's just too much to bear!

I've only just noticed that the font chosen for the phrase "social worker" in that ad is one that would more appropriately be applied to a phrase like, oh, I dunno, "KILLER ZOMBIE."