As old-timers will recall, s.z. used to do a weekly exegesis of the comic strip Family Circus, in which she applied the same analytical tools that warbloggers brought to the science of kerning. 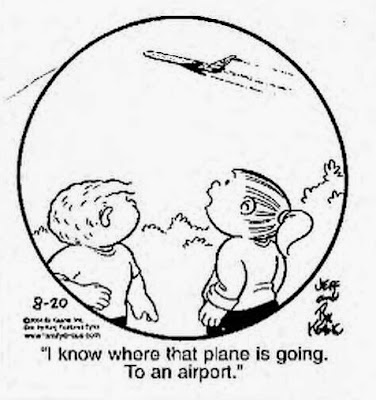 Jeffy and Dolly, whom we last saw looking for angels, are apparently still lost in the woods.  But it's daytime now, and there isn't a cloud in the sky.  Just an airplane.  Dolly says: "I know where that plane is going.  To an airport."

Yes, Mommy left the two tikes in the forest for the dingoes to eat.  Dolly tells Jeffy that she knows where the plane is going, making him think that they can use it to find their way home.  But then she reveals that all she knows is that it's going to an airport.  Ha ha.  Jeffy has had about all he can stand (it's not bad enough that he hasn't been given a speaking part in weeks, but now the only person he gets to interact with is his bossy sister who keeps making these inane remarks).  So, he secretly sells her out to the dingoes.

This plane isn't going to an airport.  It's being flown by George W. Bush, who wants to prove something about his manliness in response to the attacks on Dick Cheney's lack of a war record.  Unfortunately, Dubya doesn't know how to fly jets, and the plane is going to crash into a shopping mall in Columbus.  Ohio will no longer be a swing state.

Fortunately, Alison has a better handle on this one than I do

New toon! Analysis :
I know where that plane is going. To an airport.
I know who is flying that plane. The pilot.
I know who is on that plane. Passengers.
I know what they are eating. Peanuts.
See how the terrible suspense just builds and builds to unbelievable intensity here, to the point where a future movie deal seems inevitable? Yes, it's the All-Terror-All-the-Time-All-About-Me Flight of Doom. Annie Jacobsen is played by Dolly, who no longer has any forehead at all, and Jeffy takes the role of Annie's new best friend Billy Jo McAllister, last seen throwing a McDonalds bag off the Tallahassee Bridge. Keane has seen fit to draw Jeffy with a prosthetic left arm here in a nod to Billy Jo being so sensitive about one of the passengers having a limp : "It was more than a limp. It was the dragging of the foot." One can only hope that Kevin Spacey will be available for the role.
As Annie says herself, "This is Part 5 of an ongoing series." So remember, if you can't completely disgrace yourself in five WSJ columns and several TV appearances and still get a movie deal out of it, then the terrorists have won.
Prediction : Coming soon to a theater near you.

You should check out mleddy.blogspot.com. Every now and then he throws out brief, dry commentary on comics, with Hi and Lois a frequent target.

Ah yes, good old Annie Jacobsen. Did you know her story ended up on Snopes? Interestingly enough, The Syrian Musicians weren't really the ones that concerned the Air Marshals the most:

The source said the air marshals on the flight were partially concerned Jacobsen's actions
could have been an effort by terrorists or attackers to create a disturbance on the plane
to force the agents to identify themselves.

Air marshals' only tactical advantage on a flight is their anonymity, the source said, and
Jacobsen could have put the entire flight in danger.

This all really happened, except Ohio is still a swing state.
~

maryclev writes: The Syrian Musicians weren't really the ones that concerned the Air Marshals

The plane is gaining altitude, so Dolly's comment only makes sense if you remember the old pilot's adage, "Take off is optional, landing is mandatory."