King of the Wild Frontier Airlines

If you've read any of the many film reviews our friend Hank Parmer has written for World O' Crap, you know he has a delightfully jaundiced eye for bad movies. But he also has a rather painterly eye for scenery, and during a recently holiday to the Smokies he snapped some breathtaking photographs. (Click to embiggen.)

I'm a city boy by nature, and when I vacation I stick to the Non-Smokies Section, but I do enjoy the russet hues of autumn, enough so that I used to make regular pilgrimages from Avenue C to Central Park just to gawk at them.  Unfortunately, the pygmy dates and Mexican fan palms that line Hollywood Boulevard are persistently duo-chromatic, so Hank's pictures are as close as I can get nowadays. 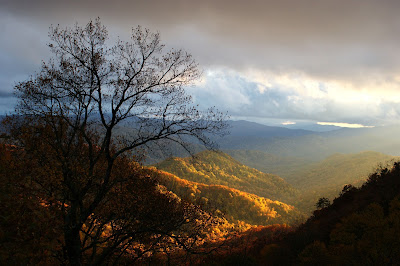 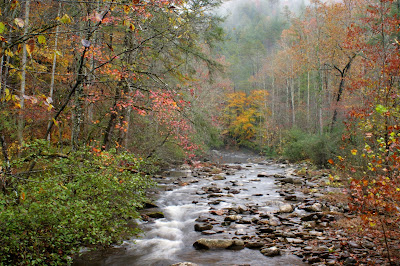 The word "Citico" is presumably of Native American origin, but after years of crassly titled stadia, I leaped to the conclusion that some oil company had bought the naming rights to this creek.

Like Davey Crockett, Hank is also from the greenest state in the land of the free, also knows every tree, and also saw a b'ar on this trip. But he didn't kilt a b'ar, because he isn't three, and that's the sort of thing that only a toddler with poor impulse control would do. Also, Hank's theme song is considerably less racist.
Posted by Scott at 9:30 PM

Email ThisBlogThis!Share to TwitterShare to FacebookShare to Pinterest
Labels: I'm in your camera stealing your soul

Wow, Hank, those are beautiful. The second one has a Hudson River School glamour radiating through it. Where were these taken?

OK, I deeply apologize in advance for my reaction.
When I saw that last pic of the creek, my first thought was Whoa, Thomas Kinkade did it from life.You gotta admit, it just needs a quaint cottage with light pouring from every window to be the quintessential Kinkade.
Other than that, Wow !

"You realize, of course, this means war!"

Seriously, though, if I could evoke a similar reaction, minus the kitsch, then I must be doing something right.

"Hudson River School" was the first thing that occurred to me, too, Li'l, when I caught a glimpse of that landscape as we crossed a bridge on the Skyway. (Well, ok, after "Holy crap!" and "I GOTTA get this!") So we pulled off at the first feasible spot and I trotted back down to the bridge with my camera. For once, by the time I got there the light was even more amazing.

The Cherohala Skyway runs through the Cherokee and Nantahala National Forests. It's a two-lane road that goes up and over the Smokies and down again between Tellico Plains, TN and Robbinsville, NC. It was specifically planned to run for several miles along or just beneath the crest of the mountains, which is kind of unusual, and no doubt why it's said to be one of the most expensive pieces of two-lane ever built in the lower 48.

Joan and I have been going there for almost a decade now, since the Great Smoky Mountains NP got a little too overrun with people for our taste.

The second one really does it for me. Beautiful lighting and composition.


...he said then unashamedly stole pics for his desktop...

Absolutely breathtaking. If Scott didn't vouch for ya, Hank, I'd have sworn that you made these up on a REALLY GOOD computer. Hell, lookit Kinkade's sweatshop-hacked crap and the quantity/"quality" that THEY turn out! If HE'S not using PhotoShop, then NOBODY IS...

But seriously --- even if it WAS "sponsored" (gag!) by some war-hawking douchebag oil company, that crick would still make me want to crawl into that picture & find a way to LIVE THERE.

Many sincere thanks, Hank. And please don't let nobody kill no b'ars, we needs 'em.

Thanks, Jono. It's my favorite, too.

With the Citico Creek pic as a close runner-up. Glad you liked that one, Annti. I can't claim I'd be courageous (foolhardy?) enough to stand between a bear and a bunch of rough-ass East Tennessee country boys with high-powered rifles and dogs. Given the opportunity, though, I'd happily point 'em in the wrong direction.

Likewise, heydave and Debbi. Scott's been prodding me to share some of my photos with you guys, so I have him to thank as well. It pleases me no end to hear you liked them.

There are a lot of gorgeous spots in my home state, but gawd-dayum, I really could do without the unfailing embarrassments to our species that are our politicians. Fuck all fear-mongering paranoid xenophobic Republican scumbags, sideways, with a large-print, coffeetable edition of Mein Kampf!

{sniffling & wringing a lacy hankie like a proud breeder would...}

Oh, Hank... that last sentence... Oh, it DOES DO an old Ranty Aunty Annti's heart so much good, to feel so proud that I may have, @ some random intersection in the universe, actually influenced someone's choice of invective/bodily harm upon republicunts... well, hell, it's just BEAUTIMOUS!!!