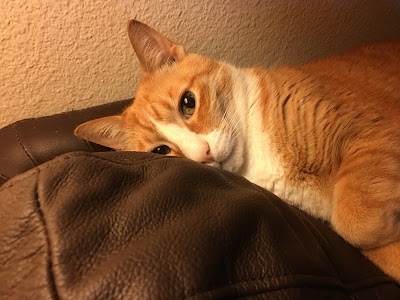 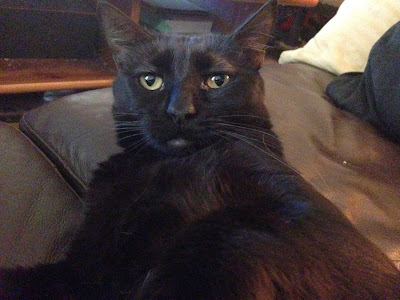 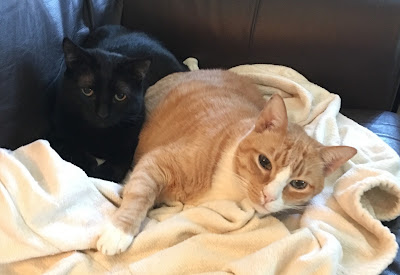 Well, Scott,you can consider yourself the very model of a modern major petlover, with or without hashtag. Those are deeply beloved, not to say spoiled-looking katz. Riley is a benign sweetie as ever, and Shadow is All Feline. And still attached to her big bro's butt, I see.

A welcome nottrumprelated reality, thanks.
BTW I totally grok what you're saying about getting parts for old stuff and the sometimes-grift scene on ebay. OTOH, it's also possible to find things like footwear for way way less than list, particularly if you have no sqeamishness about previously-owned. I guess that doesn't apply to furnace filters. Have you tried a plumbing 'n' heating supply place in your nabe? Or don't such places exist in southern Cal?

We've got plumbing, Li'l, but the word "heating" invariably causes the counter help's eyes to roll white, their heads to tilt back and forefingers point accusingly as their lips issue an inhuman shriek, much like the '78 remake of Invasion of the Body Snatchers. Which is why I prefer to conduct these transactions online.

Nobody did it like Donald Sutherland. Ah, the goodolddays...

Well, good luck with the search. I've had that sort of reaction when I've introduced the word "linoleum" into a conversation with a floor-covering salesperson -- although it was actually more of a brainless, slightly malignant stare, like a freshly-minted zombie.

You don't catch cats worrying about filters and lino.

O mea culpa! I said Riley above, not Moondoggie!
It's that ginger fur that led me astray.

Beast flogging?!?!? IN NO WAY do I support Beast Flogging. That just seems savage and not a good thing. I demand you stop all Beast Flogging immediately....