SCOTT: I think that might be a good idea--

BILL S: TRY AND STOP ME!

BILL S: In the 50's and '60's, Burl Ives was known as an Oscar-winning character actor and Grammy-winning country singer.Today he's known mainly as a talking snowman. 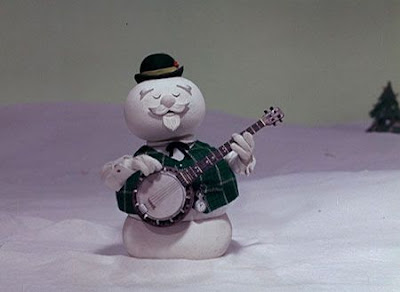 SAM THE SNOWMAN: Some people say I'm just a ripoff of Frosty the Snowman, but can Frosty play the banjo? No. And do I make sinister promises as I melt, like "I'll be back again someday!", which sounds like something a serial killer would whisper just as you pulled the lever on him in the death house?

BILL S: If I can't recall "the most famous reindeer of all", why would I remember the others? 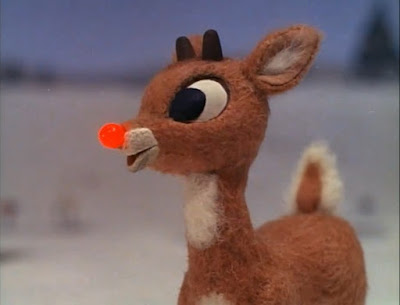 BILL S: The lightbulb aspect of Rudolph's nose isn't nearly as off putting as that damn NOISE it makes--it's worse than the Emergency Broadcast test signal.

SCOTT: This has been a test of the Emergency Broadcast Network. Had this been an actual red-nosed reindeer, you would have been instructed where to tune in your area for news and official information.

BILL S: Why aren't Rudolph's parents more freaked out by the fact that he's only a few minutes old and can already speak, and identify Santa? That's some creepy demonic shit there.

BILL S: In the first of many times Santa will behave like a total dick in this cartoon, warning Donner that his kid's abnormality will disqualify him to pull the sleigh. 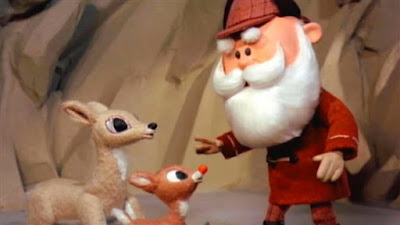 SANTA: Why you little freak! Your parents ought to pin your ankles together and leave you to die of exposure on a hillside, like Oedipus. But I suppose then you'd just come back and bang your mother! 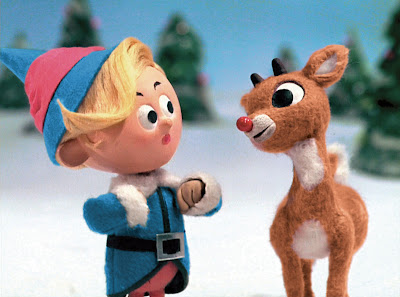 BILL S: All these years I thought the elf aspiring to be a dentist was named "Herbie". It's HERMY--a name that probably dropped in popularity after this cartoon aired. 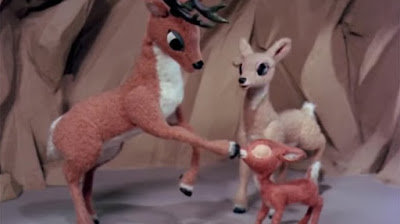 BILL S: Donner is so embarrassed by his kid's birth defect he forces Rudolph to wear a fake nose. Great parenting, dude. 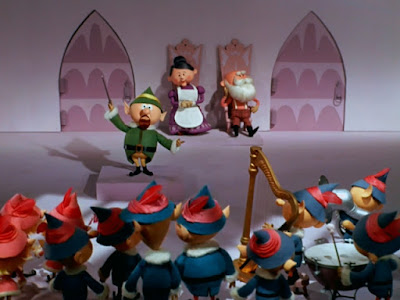 BILL S: The elves put on a cheerful musical number about how great it is to work for Santa. His reaction: "It needs work". First off, it sounded fine, and second, even if it wasn't, they're toymakers, not professional singers. And they're doing it for him. Ungrateful bastard. 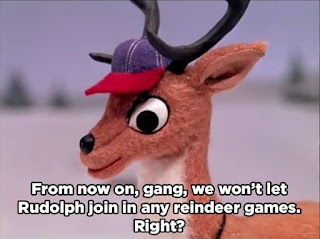 BILL S: The Reindeer Games: bringing back all of our most awkward memories from middle school gym class.

DONNER J. TRUMP: So ridiculous. Rudolph must work on his Anger Management problem, then go to a good old fashioned movie with a friend! Chill Rudolph, Chill! 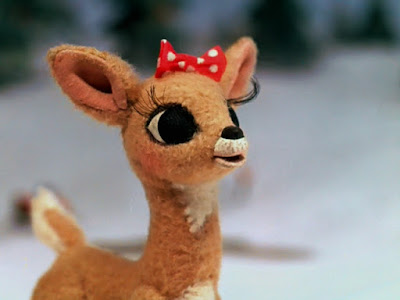 BILL S: How the heck does Clarice get that bow on her head? Even if she could somehow grip it with her front hooves, she'd fall flat on her face. And don't get me started on the fake eyelashes. 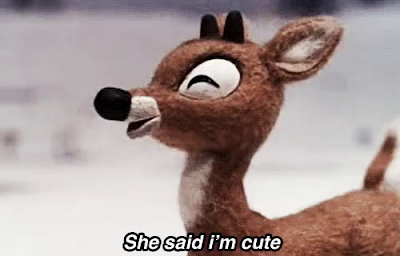 BILL S: "She thinks I'm cuuuuute!!!"
So we have confirmation Rudolph's straight. Still not so sure about Hermy. 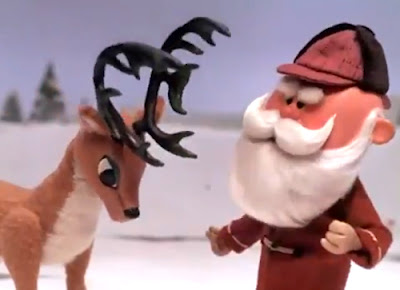 BILL S: Santa, being a dick again, telling Donner he should be ashamed of Rudolph, who remember, is still a child, and being subjected to taunts, not just from other kids, but even the coach.

SANTA: You're son's a FREAK! You should have had him DESTROYED!

DONNER: I know, but there's so much paperwork--

SANTA: Nonsense! I RULE these frozen wastelands with an iron hand! Say the word and I'll make that grotesque insult to nature DISAPPEAR! We'll bury him in an unmarked grave, salt the ground, and declare his very NAME a CURSE!

SANTA: What! YOU have a BETTER idea??

DONNER: No! Of course not, sir. I mean...you know...maybe show him unconditional love? Build up his self-esteem a little...?

SANTA: None of that's covered in your dependent benefits. Check your employee handbook, under the "So You've Whelped an Abomination" section, then skip down to subsection IV: Bury, Salt, Curse. 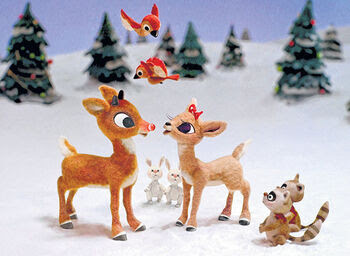 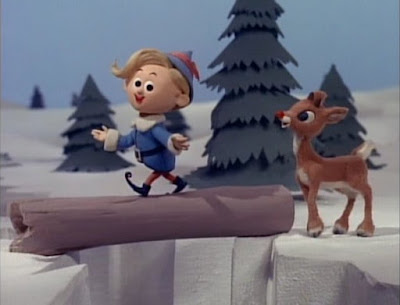 BILL S: I could swear when this thing originally aired, Hermy and Rudolph had another duet, "Fame and Fortune"--was it cut to make room for more commercial time?

1965–1997 telecastsThe 1965 broadcast also included a new duet between Rudolph and Hermey called "Fame and Fortune", which replaced a scene in which the same characters sang "We're a Couple of Misfits". Viewers of the 1964 special complained that Santa was not shown fulfilling his promise to the Misfit Toys (to include them in his annual toy delivery). In reaction, a new scene for subsequent rebroadcasts was produced with Santa making his first stop at the Island to pick up the toys. This is the ending that has been shown on all telecasts and video releases ever since. Until sometime in the 1970s the special aired without additional cuts, but eventually more commercial time was required by the network. In 1978, several sequences were deleted to make room for more advertising: the instrumental bridge from "We Are Santa's Elves" featuring the elf orchestra, additional dialogue by Burl Ives, and the "Peppermint Mine" scene resolving the fate of Yukon Cornelius.The special's 1993 restoration saw "Misfits" returned to its original film context, and the 2004 DVD release showcases "Fame and Fortune" as a separate musical number.

1998–2004 CBS telecastsMost of the 1965 deletions were restored in 1998, and "Fame and Fortune" was replaced with the original "We're a Couple of Misfits" reprise...The "Peppermint Mine" scene was not restored; until 2019, it had not been shown on television since the initial broadcast in 1964. 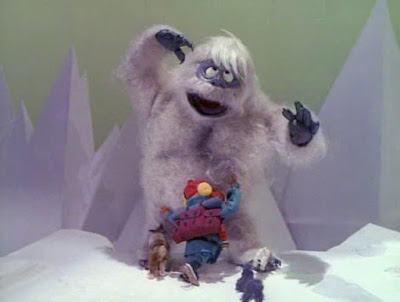 BILL S: Is anyone else completely grossed out by the Abominable Snow Monster, AKA The Bumble?

BILL S: Oh great, they escaped from the Bumble--by floating on a tiny ice raft to who knows where.

SCOTT: I always assumed they were floating down river, Huck 'n' Jim style, to the town of Hyperthermia, MO. 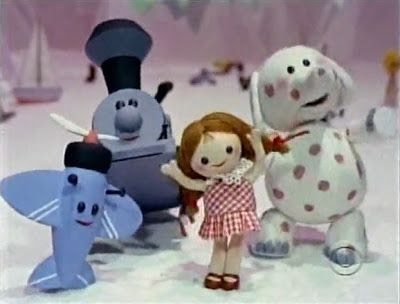 BILL S: The Misfit Toys are sentient, and can talk, sing and dance--that's way cooler than the crap the elves are making. 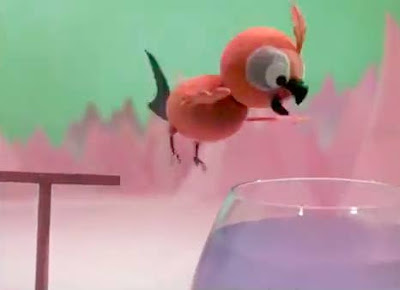 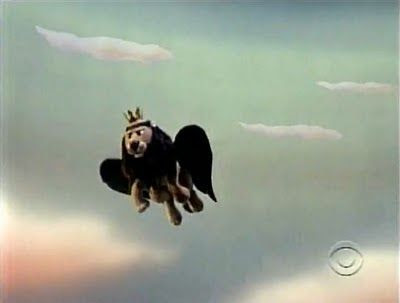 BILL S: King Moonracer is a winged lion--which makes him the biggest freak on the island.

BILL S: Rudolph returns home, and learns that his parents and Clarice have left to look for him. They could be dead or seriously injured, but all Santa cares about is how it affects HIM. Without Donner, what will he do? I dunno, use the other seven Reindeer? All this time, he never had a backup plan?

SCOTT: And he's agitated and skinny--everyone comments on it. I think while everyone else is busy making toys, Santa is off secretly cooking meth.

BILL S: Why don't the reindeer escape the Bumble by just FLYING AWAY?

SCOTT: People asked John McCain the same thing, and the answer is the same: the Bumbles, like the North Vietnamese, received sophisticated anti-aircraft batteries from the Soviet Union. The North Pole is where the Cold War got COLD, man. 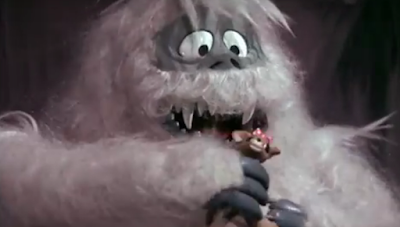 BILL S: "Why doesn't he get it over with?" Gosh, you almost never hear someone in a holiday special aimed at children express a yearning for the sweet relief of death.

If I ever go missing, I hope nobody in my family is stupid enough to look for me in the den of a dangerous predator.

BILL S: Oh, great the Bumble wants a job. Just what we need, a ladder that eats and poops.

BILL S: The snowstorm is so terrible Santa will have to cancel Christmas. I'm sure Jesus will be very disappointed.

BILL S: So, earlier, Santa was worried about how he'd be able to fly without Donner, his lead reindeer, but now he's asking Rudolph, who's NEVER done it in his life, to lead them all?

Rudolph is was too forgiving. If it had been me, I'd be like, "Oh, NOW you want my help? Suck my pointy antlers, old man."

BILL S: I wonder if those living Misfit Toys are creeped out by the inanimate toys the elves made--imagine being on a plane where half the passengers are mannequins.

SCOTT: Well, I was on a plane once where about half the passengers were watching Mannequin. 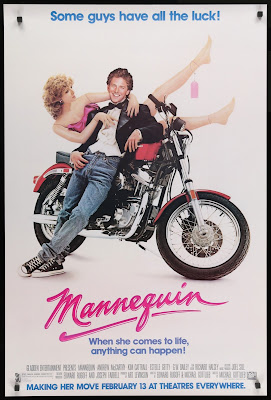 BILL S: Also, an umbrella isn't a parachute, so those Misfit Toys are crashing to the ground to their deaths.

LES NESSMAN: The toys are hitting the ground like bags of wet cement!

BILL S: In the X-rated version of "Rudolph", the line "he went down in history" had a different meaning entirely.

BILL S: Well, that's it. Hope you all enjoyed my live blogging of 'Rudolph". Good night all.
Posted by Scott at 9:49 PM

This was great Bill S! Now it really feels like Christmas!

Director gets his first look at the deformity that was his Santa, sputters where's his....are those his...man that's one deformed philtr....no, those have to be his nose, but then he has no eyes...wait a damn minute, this "Santa" is nothing but a pink bowling ball with cotton balls stuck all over it...in a fucking deerstalker hat?! Makeup! Wardrobe! My office, NOW!


I'm not the best with whit sometimes so I'll do a straight comment.
The first time I saw this movie was when I was working at a Day Care Center and someone had a VHS tape of it(mid-1980's). It was played for the kids that were there (the 3 and older group). Even then I didn't see the whole thing. I think I was lucky! I will have to thank my two older brothers who were 13 and 15 at the time, they saved me from songs that would have been earworms. I do remember songs from old series and commercials, but I do my utmost not to think of them.

Even with having watched a little long ago, I think Bill S., and Scott's version is much better!! And NO earworms!!!

"As God is my witness, I thought toys could fly!"

Thanks, guys. This really helps to put me into the proper Christmas spirit.

Bah-Humbug! to all, and to all a good nnnnaah, fuckit, another Bah-Humbug!