Johnny Got His Price Gun

When I was a little kid, several intersections in my hometown had service stations on every corner, each with a sandwich board declaring a "GAS WAR!" on their surrounding competitors with all the Prussian hubris of a Großer Generalstab convinced Imperial Germany could prevail in a two front war. Failing to grasp the metaphorical nature of the taunt, I spent a lot of grammar school worried I would die as collateral damage in the coming conflict, never knowing love's first tender kiss, or even if the castaways ever got rescued from Gilligan's Island.

Later, after Omega Man came out, I was pretty sure I'd catch some biowarfare bacterium and become a crazed, mime-faced vampire who just wanted to kill Charlton Heston, even more than I already did after seeing Omega Man.

And even later still, when Ronald Reagan was president and Civil Defense tests of the Emergency Broadcast System suddenly returned to TV after a ten year hiatus, I became confident I'd end my existence toasted, like so many Lucky Strikes, in a nuclear conflagration.

But now that a genuine pandemic is finally here, I find I don't have the energy to panic. Fear is another matter; fear is on a pilot light and can be turned up at will, but panic requires a spike of freely available glucose that I can't seem to manage without sucking on a couple Pixy Stix. Instead, I'm filling the emotional gap with bafflement and disgust at humankind as I try to buy supplies for my invalid mother-in-law and confront aisles of denuded shelves at Ralphs and CVS. It makes me surprised that by this point God hasn't grabbed the earth, tucked it under his arm while angrily scrubbing away tears with the heel of his hand, and shouted, "Hoarding toilet paper? When it's a respiratory, not even an intestinal infection? Fine! FINE! If that's how you assholes wanna be--greedy and stupid--I'm taking my planet and going home!"

There doesn't seem to be much I can do to make things better, except sit here and not interact with the world more than I normally do, which is really only not making things worse. So I'm plowing through my Kindle library at a non-sustainable rate, and in looking around for fresh reading material I see a number of authors that I follow are cutting the cost of their books. I investigated how to do that, and now, armed with the knowledge and a mad sense of power...I'm declaring a "BOOK WAR!" 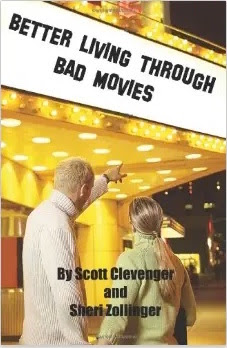 Until further notice, the ebook version of Better Living Through Bad Movies is 99¢. And unlike toilet paper, they can't run out of digital copies. Of course, unlike toilet paper you can't wipe your ass with it, but hey, that's what the Op-Ed page of the New York Times is for (and there's a new Bret Stephens column today, so eat plenty of roughage!).

Stay safe and sane everyone.
Posted by Scott at 12:01 PM

Email ThisBlogThis!Share to TwitterShare to FacebookShare to Pinterest
Labels: Now a word from our sponsor, The Book

I'm suiting up my battle gear.

TP is returning to the shelves in our town.