"I Have Been Acquainted With The Night"

We generally don't note the passing of show folk around here, except in certain, special circumstances -- say, the deceased happened to be someone we'd savaged repeatedly in Better Living Through Bad Movies -- because that's really more the province of Ivan from Thrilling Days of Yesteryear, or the Fabulous Stacia of She Blogged By Night.  But I was genuinely sorry to hear about the passing of ex-moppet Susan Gordon, at age 62. 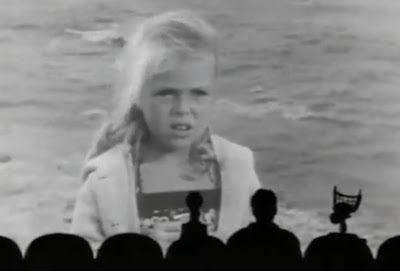 Susan, the daughter of independent filmmaker Bert I. Gordon ("Mr. B.I.G."), was an accidental actress; she filled in for an ailing moppet on Gordon's sci-fi cheapie Attack of the Puppet People (1958), and evidently made a splash.  She'd later appear in three more of her father's films, including her last, Picture Mommy Dead (1966), with Don Ameche and Zsa Zsa Gabor.

But Susan had a very active career beyond the nepotistic embrace of the Notorious B.I.G.  She was  terrific as Danny Kaye's daughter in The Five Pennies, and memorable in the rare heart-warming Twilight Zone episode, "The Fugitive," in which she played a handicapped girl who befriends J. Pat O'Malley's runaway alien. 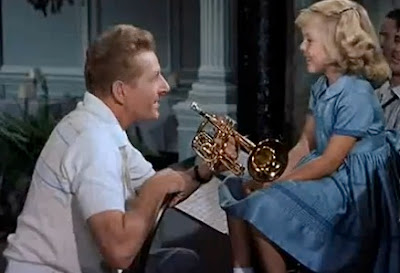 In 1959 she played the Natalie Wood role, opposite Ed Wynn, in an NBC remake of Miracle on 34th Street, broadcast live and in color, and went on to guest star in many familiar series of 1960s, including Playhouse 90, Alfred Hitchcock Presents, Route 66, Gunsmoke, and 77 Sunset Strip.

After she outgrew the moppet stage, Susan went to college, lived in Japan for 13 years, got married, became a mother and grandmother, and earned a Masters in Computer Graphics.

But to us, she will always be Sandy, The Girl Who Knew Too Much, in Bert I. Gordon's Tormented (1960)  It's one of our favorite Mystery Science Theater 3000 episodes -- a Halloween perennial around here -- and in tribute, I've put together a brief compilation of her scenes.

It's not her best performance -- like all of Bert I. Gordon's efforts, it was done quickly and cheaply, and this film perhaps more so than most, since Mr. B.I.G. had sunk a lot of his own money into it -- but in every sequence she does us the enormous courtesy of blowing Richard Carlson off the screen.  And for that, I will always be grateful.

Thanks for that, Scott. Barbara Gordon was adorable in her kid-roles, and perhaps to her Dad's surprised delight, an absolute natural.

And as you say, she stole every scene she was in, hands down.

O Crap, that's SUSAN, not "Barbara." I don't even know where I got "Barbara" from. Man, that's twice in as many days. God help me.

Maybe you were thinking of Yvonne Craig's "Barbara Gordon" (AKA "Batgirl") on the old Batman TV series.

Definition of entertainment-starved masochism: I knew that this girl looked familiar, but didn't quite place the title until I watched your MST3K tribute, Scott.

I actually watched the majority of this cringe-fest SANS ROBOTS, flat-straight, serious as herpes, AS IT WAS MADE, on broadcast television. I don't know why I kept flipping back to that channel, since the "ghost" effects were so HORRIBLY shoddy, they made an early Waters flick look like a DeMille barn-burner. Hell, this "ghost" made that Abbot & Costello flick about a Revolutionary-War-era ghost who haunts Bud, the modern-day psychiatrist --- obviously, titles are not my friends today --- THIS "ghost" chick made the ghosts in Bud & Lou's frolic look like HIGH FUCKING ART.

Roger CORMAN hadda cringe at this thing. The original version of "Little Shop Of Horrors" was more "realistic."

BUT, ya gotta hand it to the kid, Susan really did have that whole flick in the palm of her sweaty little hand. Shame that she's gone, and that we didn't see more of her when she was alive (i.e., after I was born, etc.). Though, in some scenes, I must say, she did remind me of the little girl in the apparent biography of The Fallen Uterus: "The Bad Seed."

{mercilessly flogging Carl with rusty barbed wire ("bob war") in a way that he could never POSSIBLY enjoy!!!)

I do remember her in the Twilight Zone episode, a good memorable role.
Good call, I always try to remember folks like her. Pay respect to those that served you well. RIP

Dammit, you're not supposed to ENJOY IT, Carl!!!

Seeing them ENJOY their well-deserved punishment just ruined it all to fuck and back FOR ME.

Don Ameche & Zsa Zsa? In a Bert Gordon picture? Better get that one in my queue straight away! Thought I'd seen everything. Thanks for the tip.

Anyway, it's something along the lines of "The True Story Of Alexander Graham Bell," or similar unimaginative drivel, and oh mah FUCK was Don Ameche purdy in his pre-"Cocoon" days!!!

Yeah, the flick looks like pure-dee corn-pone bleck from the promos on THIS! (MGM's dumping ground for straight-to-video shit that nobody would buy on disk or download), but who knows, you may wanna add that one to your queue, too, if you're into it.

I have SO gotta get off of my ass and do that fucking "Pretty Hooker" bit, so that I can GET IT OUTTA MY DAMNED HOUSE and get back to flicks that I *want* to see! Yeah, I'm looking forward to eviscerating the damned neanderthal piece of shit, obviously, not that any of y'all couldn't do it better, but to actually SHIT THROUGH IT AGAIN... ugh. I may not get to see the new Sherlock Holmes in the theater, I haven't been to a movie this year, but I wanna see the first one FIRST, alongside all of my "Inspector Linley," "AbFab," and stand-up comedy flicks, especially "Delirious" --- yeah, I know, Eddie is getting back into stand-up now, but it ain't like he's TOURING and it ain't like I got a radio station to comp me, and that shit is right up there with Pryor & Carlin's best. I wish I could remember which one Pryor shot here @ the soon-to-be-condemened gorgeous old Saenger Theatre, as some nut in the audience brought him a LIVE CRAWFISH as tribute, and he riffed on that shit for some time --- but for the life of me, I can't find the title anywhere or any info on any Pryor live flick being shot in NOLA. Am I hallucinating that one, or does anybody else remember it?

*TOTAL* blog-whoring aside: If anybody needs any last-minute xmas/kwanzaa/hanukkah/annti-christmas/atheist-protest-party/birfday prezzies in the cute-purse/odd-jewelry department, holler at a bitch, would y'all?

Srsly. Hit the comments on the most-recent M.O.B. post ( http://seditious.org/annti/ ) and we'll figure out what custom prezzie that you want for your dearly-beloveds! Normally, I would NEVER say it out loud on teh innernet toobs that I'm actually trying to turn an honest buck, I value my precious Medicare and soon-to-be-murdered-by-Jindal Medicaid far too much to narc myself out.

Desperate times call for desperate measures, and half-assedly flogging stuff that I actually made is a helluva lot easier on my shredded-to-wheat ego than begging like your friendly-neighborhood-door-to-door-crack-whore. When Scott, Mary & S.Z. rattle a collection plate, as truly, honestly rare as that is, it is for honorable purposes and we KNOW that they're doing good things with it, like saving the coolest-on-earth kittehs' lives, stuff like that.

Me, I just wanna sell-off some inventory that hasn't sold in-person, and at bargain-basement prices, for my own nefarious purposes. Thanks, y'all, and sorry for eating-up yer archival space, Scott, Mary & Sheri, but I figured that it'd be worth a shot just this once.