Movie Minister Pops a CAPalert in Your Ass

Well, it's nigh onto the Fourth of July weekend, and I imagine some of us will be seeking relief from the heat within the cool, dark interior of our local grindhouse.  Joining us, I'm sure, will be our old friend Thomas, the movie-reviewin' minister at ChildCare Action Project (or "CAPalert"), whom we last checked in on almost exactly one year ago, when he was in yet another snit about Harry Potter.

CAPalert was one of s.z.'s favorite subjects in the early days of Wo'C (hell, we used to make fun of him back on AOL, when it was still a walled medieval city), but he has outlasted many a higher profile wingnut, and it's all due to the Patented -- okay, not really -- but Scientifically Proven CAP Analysis Model.  Since I've coincidentally seen a few of the latest movies subjected to this infallible formula (unlike Thomas I don't have virtual parishioners buying me tickets to R-rated films so I can determine if they are, indeed, too sexy for your hairshirt, but I do have friends who invite me to the occasional screening), I thought we could check out the CAPAM in action.  Starting with...

As usual there is much more to the story and plot but to reveal any more of it would spoil it too much for spy flick fans since this film is a standard cookie-cutter spy flick just like the three previous installments of the M:I films. If I revealed much more, the spy flick fan could likely put two and two together to come up with the story before seeing the film. I will, however, tell you about the content in detail.

Fortunately, you can't spoil content.  ("What'd you get me for lunch?"  "I don't want to ruin the surprise.  I'll just say that it came from the deli counter, and contains Swiss cheese, mustard, pickles, pimento loaf, and bread.")


Hey, so is Baseball Fever!  Does that mean I can't punch somebody without the express written permission of Major League Baseball?


This was the original title of the 1973 Barbra Streisand smash, The Way We Were, but it didn't quite fit the melody.


As if God need corroboration of His own Word, man has done so by four public health agencies publishing findings that warn of violence in and as entertainment can, among other things, lead the viewer, especially youth, to believe that violence is an effective may to settle conflict.

As if further proof were needed, the preceding sentence was apparently attacked by thugs and beaten insensible.


Impudence/Hate (I) - 55 out of 100
Profanity consists of 13 uses of the three/four letter word vocabulary plus one masked use of it [Col. 3:8, Eph. 5:4] but none of the most foul of the foul words. Other matters of impudence and/or hatred include an order to lie and a man promoting universal/worldwide fatalism.

I'm not sure if by "universal/worldwide fatalism" Thomas means genocide, or if I'm misremembering the plot, and the villain was trying to launch a nuclear strike in order to start a chain reaction of hipster ennui and Calvinist predestination.


Sexual Immorality (S) - 73 out of 100
Besides one display of below navel skin which threatened to expose that which follows, vulgar paintings, a vulgar gesture and multiple views of an adult in underwear, excessive cleavage was displayed by two women repeatedly.

Well, at least the filmmakers had sufficient respect for traditional values that they hired women to display excessive cleavage repeatedly, because as much as I enjoy Ving Rhames as an actor, I have no urge to ogle his moobs.

Anyway, now that the cynosure of sexual attraction has moved from the bust to the below navel skin, I think evangelicals should spend less time watching PG-13 movies, and more time tar and feathering Cher.

Drugs/Alcohol (D) - 49 out of 100
So if "booze" and "drinking" are a separate category, does that mean Thomas has found a Bible verse which declares hydration to be an abomination (which could just be sour grapes on the part of the desert-dwelling authors), or does he deduct a point whenever liquor appears on screen, which must require him to use one of those hand-held tally clickers to count off each individual bottle anytime a scene is set in a bar.
I don't approve of drugging anyone, but it's marginally better than giving alcohol to people who just get loud and sing Poker Face on the balcony; plus, it involves less risk of a clicker-based repetitive motion injury for Thomas.

Wanton Violence/Crime (W) - Zero out of 100
If only today's debauched filmmakers could show the kind of restraint practiced by the newspaper funny pages in 1953! 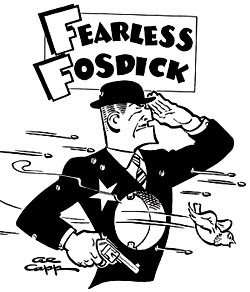 After awhile, you begin to think he's just doing it for the attention.
If you stab someone to death, are you supposed to leave the knife in as a Secret Santa gift for the coroner?  Emily Post is vague on the etiquette.
Saaaay!  That one's for the ladies...!
For those who aren't sure why this particular item is an offense to God, I would just remind you that the Bible has very strict building codes, and those who violate it, such as Babel Erecting & Contracting, are punished severely, either by fines, loss of license, or a workforce afflicted with aphasia.
It's okay to kill for money, but bragging about it makes you kind of a dick.
That last one should probably go under the Wanton Salon/Day Spa Failure category, since the woman only requested a Light Facial Decimation, followed by a reflexology massage and a Full-Body Annihilation Wrap.
Posted by Scott at 4:45 PM

I love sites like this, but CAP is awfully sparse. For instance, there's no Hugo or The Artist - strong Academy Award contenders don't rate consideration, apparently. They do, however, have Rango, which they rated at 51. That's just one point above Ghost Protocol and eight points under the remake of True Grit. I guess someone there finds Johnny Depp more disturbing than Jeff Bridges.

Like you, Scott, I am puzzled by the intellectual processes that produce these "separate" categories of unacceptable cinematic activity. I'm not up on the fine points of logic as developed by the medieval scholastics, but I can't help wondering why "gunfire shooting seeing two bullets hit man's chest" (to choose just one bullet point) could not be usefully subsumed under "gunfire wound". I must be missing something.

Also, if the CAPalert system is assigning numerical values to the various offenses, shouldn't there be some correlation between size of value and scale of badness? Does reckless driving get the same number of points as promoting nuclear warfare?

I'm too lazy and sin-ridden to go to the site to find out.

Each offense takes off between 1 and 3 points, so it's possible that two bullets in someone's chest is twice as offensive as shooting someone once? It's really not clear amid their insistence that the system is "objective."

And I'll confuse you more: Violence and murder are separate categories on that site. Not only is it possible for a movie to get radically different scores in those two categories, it's actually fairly common. For instance, the Silent Hill movie got a 0 in "Wanton Violence/Crime" (predictably) but a 100 in "Murder/Suicide." Apparently, a woman being burned at the stake doesn't qualify as a homicide in CAPLand.

Has CAPalert ever rated the Bible? Hoo-boy, that is one violent book.

There's a thing in their FAQ saying 'people keep saying to us "why not rate the Bible because of all the killings and rapings and gayness?" and they think they're clever but they're NOT because they don't get that it's the Bible so those things DON'T COUNT. Because THEY DON'T. They just DON'T. [Objectively.] So shut up.' Ignoring the fact that they disapprove of violence and impudence and so forth even being portrayed negatively since it gives the viewers ideas.

I actually feel quite sorry for them, they must lead such petty, pointless lives.