UPDATE: Sooo...it seems that I misread my calendar, and Bill and The Minx's birthday is actually tomorrow, the 15th. Usually I only screw up Doghouse's natal date, but apparently for 2013 I'll be exploring bold new frontiers in carelessness and incompetence; and since we haven't had an Internet connection all day, I'm not even sure I can fix this using my phone. On the bright side, if it turns out I can't publish corrections, I'll just pretend it's deliberate and apply for a job at the Daily Caller.

Anyway, someone please put the cake back in the fridge while I try to tape this piñata back together. (And if you haven't checked out Keith's piece on The Soda Civil War, please drop by the post below and join our illuminating discussion of constitutional liberties, knee socks, and that guy who played Baron Samedi in LIVE AND LET DIE.)
***************************************
Really swamped today, but I had to take a moment and wish a festive Natal Day to friend and valued World O' Crap contributor Bill S. (known each year on this day, in a legal and binding fashion, as Bill S!), and to friend, fellow cat fancier, and treasured member of the Wo'C community, The Minx.

This year, Bill requested two separate slabs of hairy, brawny, glistening cheesecake, and since I'm not terribly familiar with either gentleman, I figure I'd let him fill in their vital statistics.  First up: 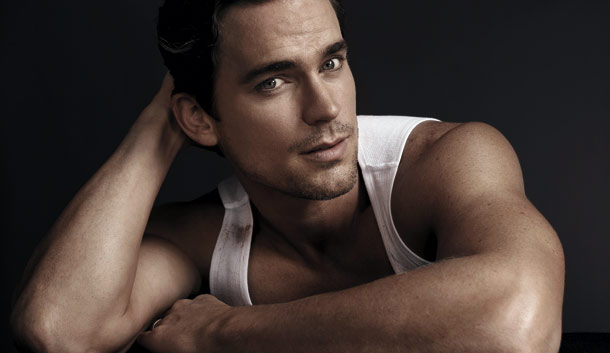 Matt Bomer
"Matt Bomer might be the prettiest man on basic cable, although he was derided as not being heterosexual enough to play the lead in the film version of "50 Shades of Grey" -- by a writer who's apparently not heterosexual enough to write the screenplay.  (Or maybe the producers decided to go with someone better at writing than Brett Easton Ellis -- they wouldn't have to look further than the nearest 10th grade creative writing class.)" 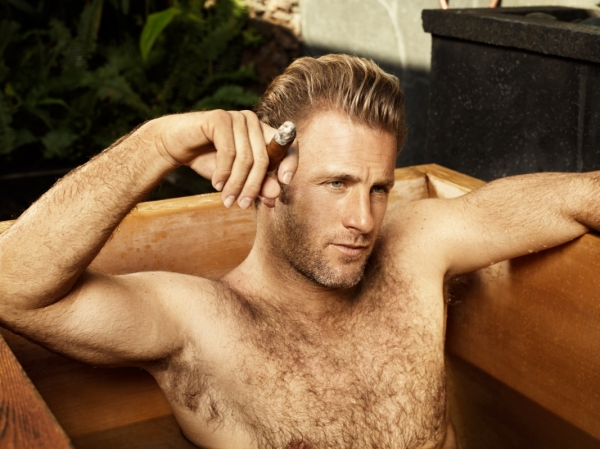 Scott Caan
"And, because I'm a shorty, Scott Caan, as a reminder that good things come in small packages -- at 5'5", he's Hollywood's Hunkiest Homunculus -- and still towers over me." 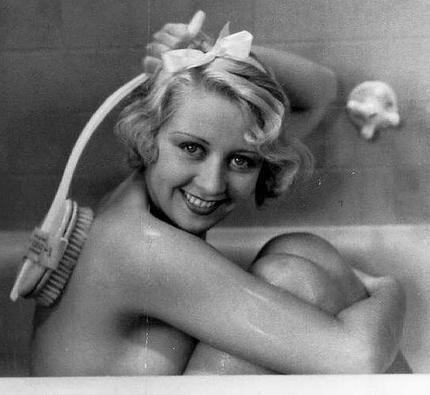 Please join me in wishing them both (Bill and The Minx, that is, not Joan's, um...never mind) a very Happy Birthday.
Posted by Scott at 1:46 AM

Thank you, Scott! And Carl!

and for those who don't know those guys, Matt Bomer stars on the series "White Collar" and had a role in the feature film "Magic Mike". Scott Caan appeared in the remake of "Ocean's 11" and stars on the re-booted version of "Hawaii 5-0". (He's also the son of James Caan.)

and a Happy Birthday to The Minx!

Happy birthdays (plural!) to you both, and many more.

Happy Birthday Bill S! and the Minx.
May all your troubles be little ones etc. etc.
Re : Scott Caan.Diffrent strokes for diffrent folks,IYKWIMAITYD.
So not my type. I like them smooth. A little hair or some fuzz, OK, but this guy is way too hirsute for me. I accept fully that YMMV.
So, enjoy the boy and the day.
Suezboo

Thank you so much everyone for all of the birthday wishes! The sassy cheesecake photos are ALWAYS my favorites-- feh on those so-called beauties of today.

Happy happy day to my Birthday Brother-- Bill S. ! I hope you had a lovely one!!

Hugs and kisses all around from
~The Minx~

So sorry, as always, to be so late to the party, my dearly-beloveds. Hope that both of your birfdays were exceptionally joyous and filled with debauchery of every color of the rainbow.

Also, Bill, darling, if you haven't seen it, DO find Scott Caan's film, "Mercy,", which he wrote, directed, and starred in, and which features a surprise cameo by his real-life old man playing his onscreen old man, Jimmy Caan. It is a rich and passionate film, though played with the hipster's detachment and poon-hound's L.A. cold-hearted on-the-hunt misogyny --- his character develops, grows & learns much in this voyage. I thought that he was a legacy "star," being Jimmy Caan's spawn, but the kid more than proved himself in this flick.

And dearly-beloved Minxie, I whole-heartedly endorse Scott's choice of Joan Blondell cheesecake, as she was one hot mama in her day, long before she was reduced to being the "saucy older broad" in "Here Come The Brides," the TV abomination that gave the world David Soul AND Bobby fuckin' Sherman. And in lieu of an ACTUAL gift, remember that The Woodchipper Principle is eternal and unchangeable, and will take care of any and every loathesome critter who EVER dares injure your pure and wunnerful heart. Okay, so "pure" might not be the right adjective here, but we can stretch it a bit for a belated birfday gift, eh? Heh heh heh...