This week, our theme is staring.  Evil stares, since we're dealing with cats here, but that pretty much goes without saying.  First up is returning guest star Chester, closed captioned by our own KWillow (Click to embiggen): 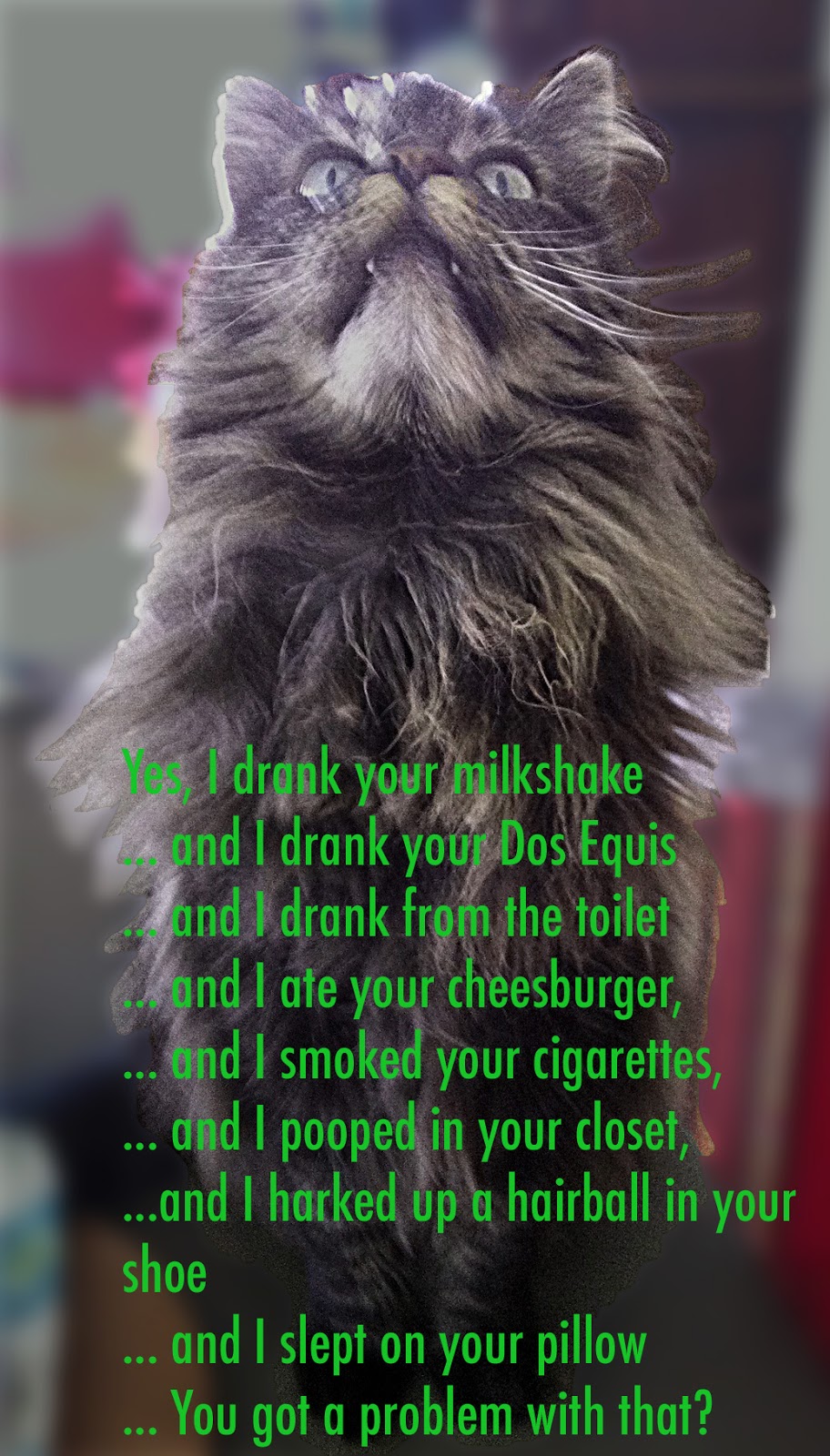 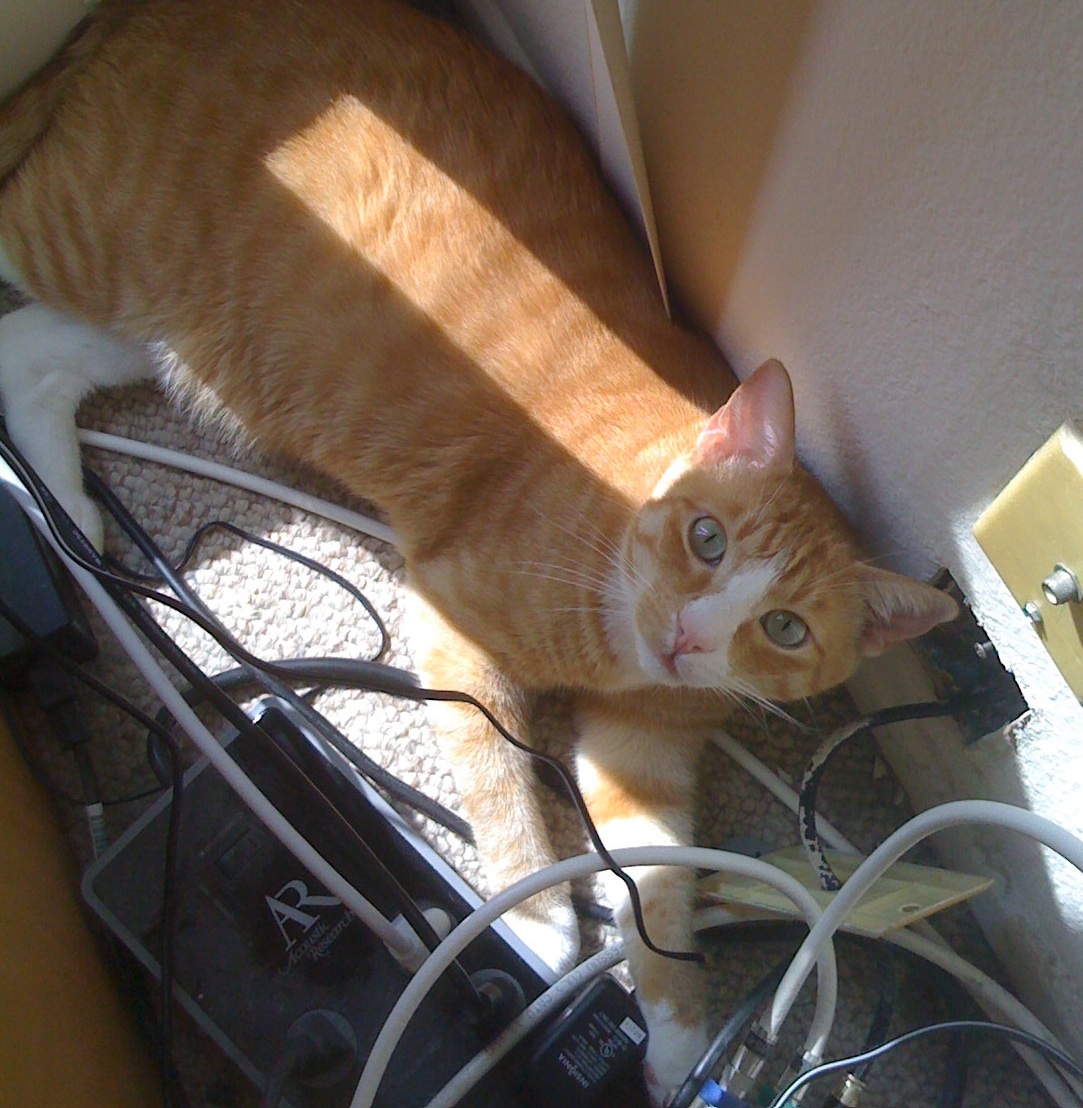 "Oh -- hi!  I'm, uh...your Time-Warner Cable representative.  You haven't been experiencing any connectivity issues, have you...?" 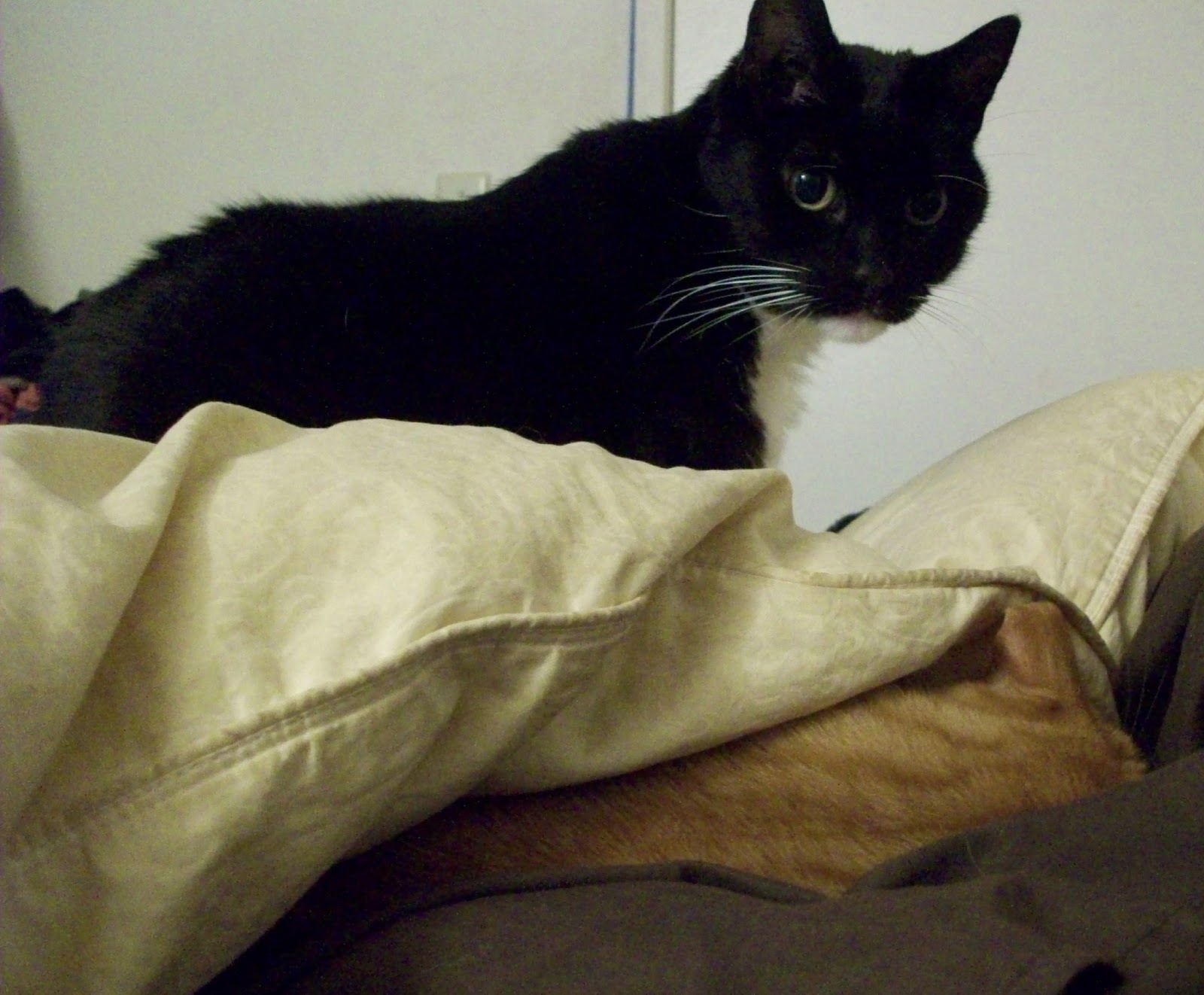 Yes, please remove him from that service.

KWillow, I had no idea that you were hiding such a wicked little tarrrist under your roof! Dumbya & Dick woulda sent teh kitteh to Gitmo for being so wickedly sharp. You are a brave, brave soul.

And as always, I covet Moondoggie's life and Riley's brain.

Weirdest cat thing to happen in a long, long time? A suddenly-new-to-the-neighborhood black & white cat (pretty damned sure that it's a neutered male) just APPEARED across the street as I was talking to one of my NICE neighbors (yes, the ones who DON'T live in this house!) this afternoon. At first, we thought that he was just a new housecat out on the prowl, climbing a short little cedar tree, jumping through the bushes, etc. He looked decently fed, very calm, silly, obviously tame... then when I left the neighbors' front porch, he ZOOMED across the street to MY yard, waited for me to hobble home, and then RAN up onto my front porch, YELLING AT ME THE WHOLE TIME! Seriously. Like he was one of the many, many priceless friends to whom I owe tons o' money.

He stands up on his long hind legs and damned near CLIMBS me to pick him up. Purring his butt off, far bonier than first assumed, very skinny face, skeered/shaking/bugged-out eyes, VERY traumatized cat. Tame, affectionate, but batshit-rattled to hell and back.

Obviously, once again, like every OTHER fucking place that I've lived over the past 8 years, SOMEBODY has put out the word that I'm the local "CAT LADY," and this poor boy, full-grown but starving for weeks now, has not only been severely neglected but also DUMPED HERE.

Calling the SPCA in the morning, see if they'll post a picture of him to their "lost & found" on the website. He's TOTALLY hostile & mean towards James, which means that the new boy (He'll be named "Bert" after my Nannie, Bertha Louise, if he's a keeper) is sleeping out on the back enclosed porch, with 2 blankets and my biggest suitcase for a snuggly-cradle-type bed. I put up visquine over the screen door, fed him TWICE already, set-up the spare litter box, and he's a helluva lot warmer & safer than he was last night.

But he will NOT come into the house until he learns to calm the fuck down and learns to RESPECT the FUCK out of James, the laird of THIS manor, dammit. Because of James' months of malnutrition & neglect at that campground, his growth is severely-stunted for a nearly-15-month-old cat, so "Bert" is MUCH taller, but not too much older, than James. NOT a fair fight in ANY situation, and fighting WILL NOT HAPPEN, not with MY baby. FIV, FELV, kennel-cough, fecal-bourne parasites, cat-scratch fever, every cat-bourne disease is potentially in or on that new boy, just about everything but rabies (yes, my brain is dying, but I can still recognize RABIES, thanks), so until he can get checked-out, either by the SPCA or James' vet when I can get the dough, we won't even be ATTEMPTING to get these two in the same room. James has been through 99 kinds of pure hell with the heartworms in his loving heart and little lungs, I sure as HELL won't be letting that batshit-crazy-around-James-but-purringly-sucking-up-to-me boy anywhere near my baby.

Cross yer fingers, kids, that this one will work out! And that the half a valium that I gave El Spazzo will MELLOW HIM THE FUCK OUT. It's been THREE HOURS, and it hasn't made a DENT YET, so, please, knock wood, burn fairy dust, light candles, and hope hope hope that he mellows the fuck out SOON.

XOXOXO
Yer Ranty Aunty Annti,
aka Teh Cat Lady ("crazy" is more than redundant and slanderously stereotypical, n'est-ce pas?)
And all my love to The Feline Overlords!

Actually, Zardoz, he reminds me of the Doctor who was wrapped-up in that bizarre muffler, ratty coat & curly hair, circa 1983 or 1984ish... I never did understand that show, much as I tried, but then, Louisiana's excuse for "public television" isn't exactly educational, unless you count CATECHISM... *sigh*

The shots w/ Moondoggie & Riley together are the best ones.