[We're having an fundraiser to keep the ugly, cottage cheese-looking acoustical ceiling over our heads. The details are in this post. Thanks to everyone who's contributed!]

So I hear that Bill O'Reilly has won the War on Christmas, and I trust he will be decorated with our nation's highest honor, the Silver Star of Bethlehem, with Tinsel Clusters, which will either be pinned on his chest by the President, or placed atop his head by a Bumble.

Unfortunately, our boys won't be home by Christmas, because this is a two front war, and Bill must now turn his attention to...

THE WAR ON HANUKKAH

And he'd better snap it up, because we're on the fourth night already.  Luckily, the Holiday-Industrial Complex is turning out the weapons we need, such as this Camouflage Dreidel.  Or a Draydel (changing the spelling is one way to confuse your enemies). 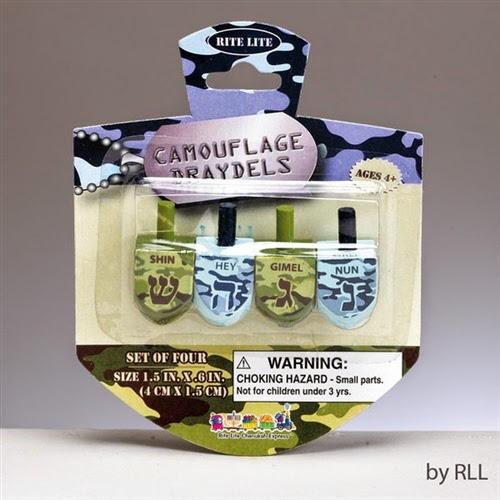 Whether it's in the jungle or in the snow, our enemies will never see the Draydel with their name on it.  Or maybe they will, but they'd still have to be able to spell their name in Hebrew to figure it out.  (And maybe it's because I was raised Catholic, but whenever I play Camo Draydel I always seem to get "Hey Nun", which is something I said to Sister Camilla once, just before she broke a yardstick over my shins (but not, fortunately, my gimels).

Anyway, I'm not quite sure how we exploit this advantage in stealth, let alone weaponize it. I guess we'll have to send a bunch of 4-year olds to war and just hope they wind up fighting a bunch of 3-year olds who can't cope with a choking hazard.
Posted by maryclev at 1:02 AM

I'll betcha a dollar to a doughnut that said "Draydels" came from a DOLLAR TREE store!!!

Just to give you an idea of how our Chinese overlords REALLY think of us --- second week in on the Deepwater Horizon clusterfuck caused, not by BP, even though they certainly were COLLUDING in the intentional fuckup to drive-up gas prices --- y'all with good memories will recall that motherfucking HALLIBURTON was in charge of "SAFETY" on that shutdown of the rig. Any questions?

ANYWHO, back to Dollar Tree: 2 weeks into the seemingly neverending oil gusher, a new item appeared @ Dollar Tree: a goofy/toy version of an IV bag, FILLED WITH BLACK SLUDGE, with the label, "OIL SPILL TOY"!!!!!!


(Somewhere, in the clusterfuck of rubber duckies that is my bathroom, I still have that evil fucking thing.)

I'm seing more Hanukkah items in stores these days, especially the pretty menorah blue or white candles, but I thought this was part of the War On Xmass!

Most American kids would be kind of annoyed to get a spinning top for a gift... or not. My daughter preferred to play with the boxes toys cam in rather than the toys, when she was four.