The War on Christmas and Commas

First of all, I wanted to thank everyone who did something for #GivingTuesday - your good deeds will not go unnoticed by Santa, probably.  If they do, you can sue.

And I specially wanted to thank Jim Donahue, acrannymint, and the irreplaceable Anti for their donations to Four Paws.  I am fostering the 5 little kittens thanks to their generosity.  Here's a bad photo taken with my laptop of one of them.  Thanks, folks! 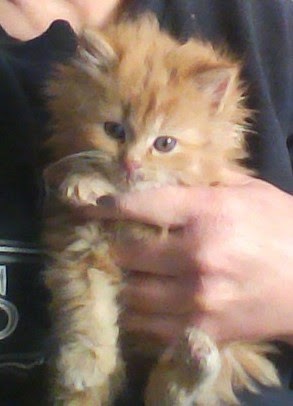 Secondly, I wanted to warn you of a threat to your very way of life that you probably aren't aware of, but will be now, thanks to Kevin Fobbs.  So be aware.  Be very aware!


Has the war for Christmas been lost to atheists and the ACLU this season?

It is that time of year when you and your family have an opportunity to share in Christmas cheer with family and friends.

Oooh, that is scary - you and your family meeting your other family!
No, wait, I think the threat comes in the next sentence.


But what you may not be aware of is the insidious War on Christmas that is occurring and unfortunately is nothing new in Obama's America.

Yeah, it's nothing new, but you probably never heard of it before, since you're pretty stupid.


The weapons that are being used to wage war on Christmas are lawsuits, mainstream media attacks and willing liberal politicians who degrade and denounce Christmas celebrations

And surprise.  And an almost fanatical devotion to the Pope.


Last year there were several hundred attacks on Christmas celebrations and only one news organization,

We will pause for a moment while you guess which new organization was the only one to report on this very important and totally real war,


... Fox News spent time focusing on the growing number of incidents which deprive children of celebrating Christmas in schools and families being able to celebrate and share Nativity Scenes in many public places.


Many detractors have worked tirelessly throughout the year to undermine Christian beliefs, be it the president's drive to deprive military training academies the passing out of bibles to even expressions of faith by soldiers.

And let's give those folks a hand for their tireless efforts, for apparently their punctuation eradication efforts are achieving great success.  But who should we blame for the lack of "Merry Christmas's" ringing through the land?  Why President Obama, of course!


According to The Week,'s information from the Public Religion Research Institute last year, its study showed that now 49 percent of Americans accept the belief that Merry Christmas should be replaced with the saying, "Happy Holidays." This is not coincidental. After all President Obama who has been neutral on the vilification of Christmas nativity scenes which have increased being under attack since he took office. Obama himself appears to be more comfortable reciting and participating in Muslim observances than Christian. Now, as time passes with him in office the abandonment of Christian Christmas celebration and the traditional greeting of "Merry Christmas" that goes along with it has plummeted.

So, yeah - if the President is neutral on crèche vilification, it's not coincidental that Merry Christmases would plummet.  It's just not!


Only Fox News has done the heavy lifting when the president has decided to go golfing when it comes to reminding Americans about where the War on Christmas continues to be waged.

I'm going to have to let you decode that one.  Does Kevin mean that only Fox News helps carry the President's heavy golf bags, or that only Fox news keeps reminding us about where the war is being waged on the President playing golf (at Fox News central)?  I give up.

Yes millenials are 100% of America's future and everybody else should just die or move to Russia and they are also the message of Christmas which is a miracle that God bestows on good nations but doesn't give to nations with younger or older people or Presidents who don't defend nativity scenes from CNN watchers who wish people Happy Holidays or who celebrate Kwanza which is a totally made-up holiday by somebody who wasn't God.


Join in with Fox News and millions of others in towns, cities, neighborhoods and homes and continue to share the reasons why Christ was born.

To save Fox News and millions of other news's from their sins.

And Merry Christmas from Kevin, who also wishes you a Happy Terri Schiavo day.  Seriously.
Posted by s.z. at 4:57 PM

the insidious War on Christmas

Sax Rohmer's one attempt at a heart-warming holiday classic was a little disappointing.

But this post provided me with some much-needed holiday cheer (not to mention the near-fatal Cute Overload from that kitty). Mr. Fobbs is clearly a Wingnut to Watch! In fact, I hope all his brown-nosing of Roger Ailes' network results in him getting his own FoxNews show, if only for the promos: "Watch Fobbs!"

Merry Christmas should be replaced with the saying, "Happy Holidays."

Wait, what. In books? In daily conversations? 49% of Americans want some kind of global search-&-replace operation applied to all text on the Internet?

If 49% of Americans are really in favour of the mandatory replacement of one anodyne exhalation of air with another one, I would say that 49% of Americans are irredeemably stupid, but the alternative possibilities are (a) the Public Religion Research Institute is asking really stupid questions, or (b) Kevin Fobbs is lying. Or some combination thereof.

Fox News has been letting us down lately on the Great Ebola Panic of 2014.

Has anyone done research in to when the bogus "War on Christmas" BS started?

I'm sure my mass-every-Sunday parents sent out Happy Holidays cards on occasion and thought nothing of it.

While Fox News certainly popularized the battle cry, I doubt it started there.

When I was a kid the holiday discontents of the Professional Christian class were primarily focused on merchandizing over spirituality -- that Christmas was all about shopping and no longer the swaddled babe in the manager. I mean, that's basically the theme of A Charlie Brown Christmas (1965), but commercial exploitation of the holiday was an issue in 1947's Miracle on 34th Street too (Alfred, the young Macy's janitor and apprentice Santa sighs, "Yeah, there's a lot of bad 'isms' floatin' around this world, but one of the worst is commercialism. Make a buck, make a buck. Even in Brooklyn it's the same - don't care what Christmas stands for, just make a buck, make a buck.")

Now -- and like Jim, I'd love to know precisely when this began, and who thought it was a hill worth dying on -- the PCs have not only acquiesced to the commercializing of Christmas, because the Free Market, they've become the riot cops enforcing it. Where once you went to the Five & Dime for gifts and the cathedral for mass, now you're entitled to a benediction from the mouth of your various salesclerks, and woe betide the harried cashier who doesn't provide it. Forget separation of Church and State, we no longer even have separation of Church and Newberry's.

It isn't the commercializing of Christmas that bothers our conservareligios, its "secular" efforts to place and keep Christmas in a strictly religious context: the church! and keep it out of the government. No creches in Pubic schools & parks, or in government offices and buildings and, yes, get it out of the Military.

When I was a little girl in 1961 we had lots of creche/nativity scenes at our public schools, many in the classroom. Paper mache angels blowing trumpets hung from the ceilings.The star of Bethlehem was all over the place. We had school plays in the multi-purpose room where kids acted the part of the 3 Wise men, Mary, Joseph, and angels. We sang the religious christmas carols in class. No one even heard of Hanukkah, or Ramadan. Most kids weren't even aware there were non-christian religions, unless they were themselves Jewish or Hindu or Moslem or Buddhist, and they kept real quiet I can tell you.

In the last 40 years or so there has been effective secular (public) push-back against government sponsored christianity being forced on the entire populace, with the courts (till now) ruling against government participation in (christian) religion.

Christians call that the "War on Christmas". Oh, they yap about salesclerks saying "Happy Holidays" or other religions showing off their faith, but mostly they're furious that the U.S. Gov isn't openly and blatantly supporting the christian religion anymore. Except, apparently in the Air Force.

It would be great fun to send this clown to Japan for Christmas, just to watch his head explode when he finds out the vast majority of celebrants aren't even nominally Christian.

And all I can say is that kitten's CpCC (Cuteness per Cubic Centimeter) Index must be something phenomenal.

Ngram further reveals that the usage of "happy holidays" started to increase about 1995 -- was that in response to Kwanzaa? -- but only recently surpassed its previous peaks in 1930-32 and around 1948.