Happy Halloween, guys!  What are your plans? We don't get Trick or Treaters in our neighborhood, which is evenly divided between young, heavily bearded hipster dudes, and middle-aged, heavily mustachioed Russian women, so I'll just be sitting around, drinking and watching a bad movie. Which is what I like to think Richard Burton would be doing if he wasn't quite so egregiously dead, except he'd probably be making a bad movie, so maybe the dead part's just as well. Speaking of which...

Open up your pillowcase! No, it's not a Fun Size Snickers, a razorblade-equipped apple, or a rock; this year we're giving out another preview from our upcoming book, Better Living Through Bad Movies II: The Sequelizer,  and it is -- appropriately -- one of the worst sequels ever made. 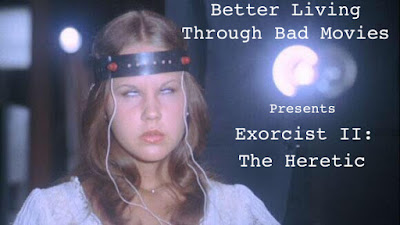 So please join us as John Szura and Blanche Ramirez go full Mercury Theater of the Air to bring you the spine-tingling horror that is Exorcist II: The Heretic, a film that ruthlessly kills priests, grasshoppers, and Linda Blair's career, and so desperately cries out for pain relief that you may actually get as drunk watching it as Richard Burton was while making it. Enjoy!


Click here to listen on Stitcher
Posted by Scott at 12:01 AM