I am neck-deep in swamp water and only wearing hip waders, so I hope you'll pardon me for postponing the party a few days. However, there's a classic Bill S. review from 2011 that I think would be the perfect way to celebrate the day. So please sit back and enjoy some gay that you can't pray away, no matter how hard you try...


Just Call Him Angel of the Morons
By Our "Goes Where Angels Fear to Tread" Correspondent, Bill S.

As we all know, October 11 is the birthday of Anntichrist S. Coulter. Additionally, it's the birthday of the beautiful and talented Matt Bomer, who in the parallel universe where my life is perfect, is my husband.
But October 11 is also National Coming Out Day, and I'd like to mark the occasion (which, unlike Columbus Day, isn't a national holiday) with a look at a movie aimed at LGBT youth.  In their book Better Living Through Bad Movies, Scott and s.z. failed to include such an entry -- a forgivable oversight, since there are only so many bad movies a human being should be expected to endure. Fortunately, I'm here to pick up the cause. Every movie genre gets the Manos: the Hands of Fate it deserves, and I do believe I've found it: a 2007 gem titled An Angel Named Billy. 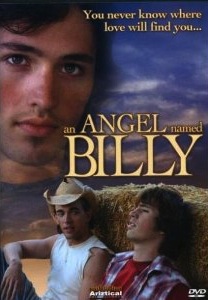 One of the comments posted at YouTube reads, "omg i used to work with that guy at jamba juice!" The commenter doesn't specify which guy, or when they supposedly worked together. It could be anybody in the cast, and as recently as a month ago. But I'd rather not focus on the batch of virtual unknowns who populate this movie, except to note that the actor playing the titular role was, according to the IMDb, born in December of 1987, which means he was over 18 when this was made. At least I hope so; who knows how long it was sitting on a shelf before it saw a release date?
Instead, I think most of the credit for this movie should go to one George Osborne, who wrote, directed, and co-produced it. Mr. Osborne's artistry and insight into human nature take him where Todd Haynes and Gus Van Sant would never go -- on a fast track to total obscurity. At least I hope so.
Before I dive into the plot synopsis, I must confess I only watched this once before mailing it back to NetFlix. While I'm 99% sure I'm recalling it right, there does exist a possibility I've misremembered the order of some scenes. I offer my apologies for any errors, and I offer my sympathies to anyone who saw it enough times to spot an error.
This is the story of Billy, a teenager living in an unamed rural area. We know it's rural from the presence of cowboy hats and bales of hay. Billy's mother left the family years earlier, and he's being raised by his dad, who's a religious fanatic, an alcoholic, and an abusive asshole. We know these things because he sits at the kitchen table poring over a Bible, slugging down one Scotch after another, and screaming at Billy's younger brother Zack, who looks like a scared rabbit everytime the camera is on him. And because birthday traditions -- especially where Annti is concerned -- are a sacred thing around here, let us now close with the traditional...

Please join me in wishing Joanna (oops! I outed her. Oh well, it's National Coming Out Day) a very happy natal anniversary.
Posted by Scott at 2:44 PM

Joining ! Many happy returns, Annti ! Hope you and the critters are doing well. Celebrate nicely and have a great year.
Best
Suezboo

Thankee, Mary & Suezboo!! And Scott, that is THE most adorable lizaredd that I have ever seen!!! Cuter even than the spastic little green bastard who suddenly appeared in the kitchen sink awhile ago and wasn't really thrilled to have me relocate him to the great outdoors. I have never seen such a happy gecko or lizaredd in my entire life --- I wish that I could have his clip implanted in my bifocals for as-needed replays on demand.

The cats are still spoiled, aging but still kicking, and hard, especially when I bathed them a week ago (beat the fuck outta me and Moose BIT ME!). James tangled with something fearsome recently, lost a coupla toenails, but otherwise is fine. He's just too damned adventurous for a middle-aged cat with holes in his lungs & heart, that's for fuckin' sure. Thinks that he's James Bond or John fuckin' Wayne (Though I hope he never looks like Marion did in "The Shootist"!).

Thanks to Scott & Bill S. for the loverly birfday post, though I coulda lived without the flashbacks to the closet-cases that I've been fool enough to "date," if you can call it that... But let's not bum-out the room too much, eh? And where the hell is my Charlize???

P.S.: Special thanks to Mentis Fugit for kicking me & reminding me to swing by the ol' homestead for the first time all fucking year & express some long-delayed gratitude... Sorry to have been so MIA for so long, but I've been sick and VERY fucking stressed-out, stranded here w/teh BEASTMASTER, aka THE FALLEN UTERUS... *sigh* Three fuckin' years now... *sigh*

Are irregular homosexuals the ones in the discount rack at the back of the factory outlet store?

That sort of thing.

Mentis: Exactly. And the best part is...they're priced to move!