My friend and podcasting partner Jeff Holland saw Jigsaw (don't judge, we all have dirty habits) and, as is his wont, texted me about it afterward: 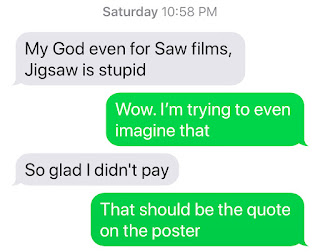 I don't personally plan to see the movie (Jeff is like a Distant Early Warning system for crappy horror films), so I can't speak to its flaws or virtues with any authority or even vague familiarity. Fortunately, this is the Internet, so who gives a shit?

The problem with Jigsaw is likely the same problem that plagued the Saw franchise as a whole: it would be a better movie if it had better victims. Fortunately, while this country remains divided politically, it appears united in its desire to see one group of people padlocked into damp, rusty, Rube Goldberg death devices: TV pundits.

And it seems that Jigsaw has heard the vox populi and is already working on his next opus, at least judging from this photo lifted from a panicky right wing website: 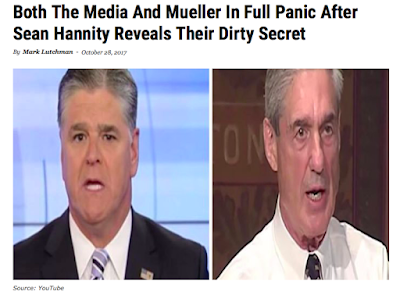 The headline says "Victory is mine!", but Hannity's face tells another story, suggesting the Jigsaw Killer has placed a blood pressure cuff around his scrotum, and is slowly inflating it -- one squeeze of the bulb for every lie that pops out of Hannity's gob.

Already things are more suspenseful, right? Will Hannity relent and join the rest of Fox News in devoting his airtime to Google's criminally inept cheeseburger emoji... 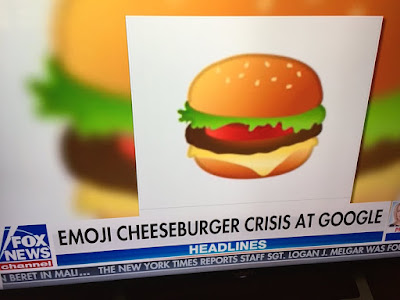 The cheese goes on TOP, not UNDER the patty, you idiots!

Or will he stick to his business model and projectile prevaricate until he's castrated like a sheep? I don't know, but I'm already popping up the Orville Redenbacher Sea Salt & Vinegar.

And unlike the other movies in the Saw franchise, you've actually got somebody to root for, since this scenario makes Jigsaw a much more sympathetic character.

You're welcome, Hollywood.
Posted by Scott at 1:37 PM

Great click bait headline! I don't think the media or Mueller are in panic mode, like, AT ALL.

Also, I am on board for the Jigsaw vs. Wingnut Wurlitzer movie. That one should be put ahead of the Alabama Truck stop movie on the priority list. Unless, of course, you find a way to combine them....probably using a chainsaw and an inbred family of BBQ enthusiasts....

Forget "White Working Class". I nominate this as the new term of art for the typical Trump voter.