Happy Birthday, KWillow! I Got You a Gross Listicle!

Well, this one is late, but it's still officially the 18th for another fifteen minutes, so I'm hoping to get off on a technicality. Anyway, today is the natal anniversary of one of our favorite people -- the kind, witty, and cat-worthy KWillow -- and in her honor, I went where I usually fear to tread these days: the referrer logs which list the Google search strings bringing people to World O' Crap. Here are the Top Ten (Mostly Not Pornographic) ones...


1.)  images of cat dander: If TV was honest with us, this would probably be the climatic moment in any given police procedural. "There! Zoom in! Enhance...Enhance...Enhance!...Yep. Just as I thought...The cat did it."

2.) codpiece ballet: I'm sure you recognize this lovely melody as "A Stranger in Paradise". But did you know that the original theme is from "The Magic Dance Belt of Prince Igor" by Borodin?

3.) inflatable bat inflation: As Halloween approaches, we're all feeling the pinch at that pop-up stop in the former sprinkler fitting warehouse on the frontage road that runs along State Highway 31, as the prices for pneumatic pumpkins and blow-up bats has skyrocketed! Well phooey on that. I'm just gluing eight pipe cleaners to a plastic L'Eggs pantyhose egg and calling it a tarantula and a night.

4.) hitler campaign poster: Let's face it, Trump may get indicted or impeached before the next Presidential election (I mean don't get your hopes up, but it's possible). But the Republican National Committee is on the job, and is already focus-testing some very experienced candidates.

5.) it’s only rock and roll but i like it gay bear: This seems to be a trend, with Hanna Barbera stalwart Snagglepuss being rebooted by DC Comics as...well, I'll let them explain it:

"Exit Stage Left: The Snagglepuss Chronicles, written by Mark Russell with art by Mike Feenan, presents Snagglepuss as a gay Southern playwright in the style of Tennessee Williams. 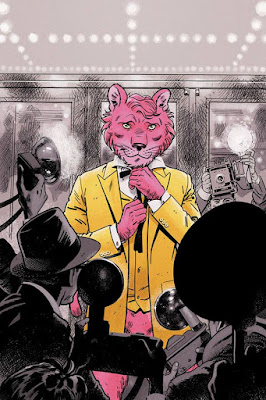 "“Snagglepuss in this story is having to live a double life as a gay playwright living in New York, and he's closeted,” Russell explains. “But he has values and integrity as an artist, and he's trying to stand up for people who otherwise would be shoved under the stairs in this time of great national paranoia in the Red Scare mentality."

I know what you're thinking, but this is true. I learned it via Ivan of Thrilling Days of Yesteryear, who, as Doghouse Riley used to say, is "the last honest man on the Internet".

So my theory is, Question #5 means that somebody is rebooting the William Friedkin film, Cruising, with Yogi Bear in the Al Pacino role.

7. slim big ass: This is probably what Slim Goodbody calls himself in the mirror on days when he's feeling depressed and fat.

Please join me in wishing KWillow a very happy birthday. And to make it official, here's a... 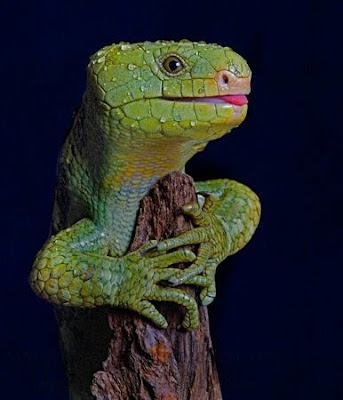 Sexy Birthday Lizard! Apparently delivering one of the Fifty Great Monologues For Young Actors.
Posted by Scott at 11:45 PM

Hey KW, many hoppy returns. Everything somehow seems late or off these days, but the birthdays are always on time.

Sigh. I miss Doghouse Riley. He would have been IN HIS ELEMENT with this admin, especially Human Thumb as VP.

Anyway, HBD, Kwillow. Hug a kitty, Trump can't take that away from us....

2.) codpiece ballet - I'm gonna guess they were looking for this:
https://www.youtube.com/watch?v=mSJVEb-qljA

Happy birthday Quillow. (Well that's how I read it.)

I somehow completely forgot that scene. My bad.

Mentis & Scott: Sometimes, the way that y'all's brains work frightens me. Mostly in a good way.

Whatta y'all think? A loverly purple flannel gown like the one that I got for my birfday (shaddup!) or something from Frederick's, for KW's prezzie? Fred DOES make some hellaciously good brassieres...

zrm, I SO remember Dear Doghouse warning us all about this choirboy/putz and saying he should never be elected to anything ever."..the good is oft interred with their bones" < Random Shakespeare quote, always handy.

KW, have a lovely day and year. Kisses to the kitties and hugs to you.

Happy D.o.B., KWillow, illustrator extraordinaire and all-round credit to the species! (Unlike the human dregs now dominating the airwaves.)

Hope you had an enjoyable natal anniversary, and many more to come.

And I'm going to do a Scott here, and apologize to Annti for somehow neglecting to note she had a birthday earlier this month in time to wish her many happy returns of the day where I should have, in her own bday comments. You two are a big reason this is one of my favorite spots on the intertubes. (And the rest of the gang, of course.)

Chopped liver, are we?

Well, yeah. But you're the tasty kind, like you can get at a good kosher deli.

Heh heh heh... Thanks, Hank. One of the many things that I miss about anything resembling civilization, up here in the very non-kosher boonies, is a good deli! *sigh* And rugelah. And kreplach.