Late To The Party 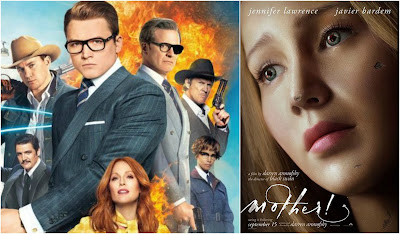 Well, between my exile to Alabama and a ton of work that piled up in the meantime, and certain ch-ch-ch-changes in Jeff's life, The Slumgullion is way off schedule. Waaaaaaaaay off.

Okay, we'll stop thinking of it that way.

Current events have sent a tender and bruised Jeff scurrying for his safe space - talk radio. Meanwhile, Ike returns to face off against Mother!, while the remains of a Revolutionary War soldier musically whines about how long it's taking his own mom to come collect his corpse.

Then it's spies, housewifely drug lords, and implied buttsecks with the composer of The Lion King, as the New Movie Crew gathers at Golden Corral to watch Kingsman: The Golden Circle.