When Bites the Beaver!

When I think of Adam Yoshida, I touch myself. No -- wait -- that's not right. What I mean to say is, I think of a Howard the Duck comic from 1976 in which Howard reluctantly battles Pierre Dentifrice, "Canada's Only Super-Patriot," whose beaver costume/exoskeleton grants him enhanced strength and...log-gnawing abilities? I don't really remember, it's been awhile.
The point is, back in the mid-70s, Canadian chauvinism was in short supply, so it would be only natural for an aspiring super-patriot like Adam to transfer his jingoism to the USA. But nowadays, there are plenty of crazy conservatives north of the 49th Parallel, and while they're small beer compared to our own nativists, oligarchs, and reactionaries, there's clearly room for advancement. Still, George W. Bush is the daddy that brung Adam to the Purity Ball, and the kid ain't gonna dance with another.

Bin Laden's Death and the Vindication of George W. Bush

"Whether we bring our enemies to justice or bring justice to our enemies," declared President George Walker Bush nine days after 9-11, "justice will be done."  I've always thought that that speech, delivered to a Joint Session of Congress on September 20th, was the one of the finest Presidential orations of my lifetime -- certainly the best to be delivered in that place since either General MacArthur's 1951 Farewell speech or FDR's call for Congress to declare war against Japan.

I don't know, Adam. Somehow, "Whether we bring our enemies to justice or bring justice to our enemies," doesn't sound like FDR, it sounds more like The Sphinx from Mystery Men... 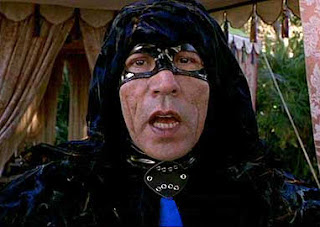 "To learn my teachings, I must first teach you how to learn...He who questions training only trains himself at asking questions...When you can balance a tack hammer on your head, you will head off your foes with a balanced attack. "

Now it is a promise fulfilled and, as the details of the sensational operation that killed Osama bin Laden come to light, it is becoming increasingly clear that while all honor and credit for the successful execution of the mission must go to the superlative members of the United States Armed Forces, the strategic vision that brought this glorious moment into being was that of George W. Bush.

Wow, I've seen wingnuts sprout wood over The Decider before, but this is like someone put a pair of Dockers on a lodgepole pine.

Let's review what we know about bin Laden's death and how it came to be.

I believe it involved bullets.

The CIA was able to find him by tracking a courier.  This was a process that took years.

He walked kind of slow for a courier, liked to window shop, and stopped frequently to tie his shoe.

It actually began during the Bush Administration -- in 2007.  How did the Intelligence Community find the courier who eventually took them to bin Laden?  They found him through information gained from interrogating terrorist prisoners.

Ah, so it was after they claimed to have stopped waterboarding prisoners? Seems like the Bush Administration wasted a lot of washcloths and Aquafina for nothing.

But former CIA Director Michael Hayden said the information was gleaned at one of the Agency's "black sites," not Guantanamo. I guess it's true -- failure is an orphan, while success has a thousand Michael Lohan-style fathers.

Given what we now know, how many people still think that the opponents of Guantanamo Bay -- including the current resident of the White House -- were right when they screamed about its supposed inhumanity, plotted to close it, and vowed to move terrorist prisoners into civilian courts?  It would seem that George Bush and the defenders of his detainee policy were right all along.

Then why did they stop waterboarding Khalid Sheikh Mohammed after only 183 times? Especially when he hadn't given up the name of the courier? It's like Bush wussed out and lost the courage of his detainee policy; I bet when he stopped the indiscriminate use of torture, the first time he dropped his shorts his balls fell out like so many ping pong balls raining down on Captain Kangaroo.

The death of bin Laden and the broader course of the Global War on Terror during the two and a half years of the Obama Administration reflect the reality that the policies of the Bush Administration in this area, for all of the hysterical condemnation and calumny they endured, were the best and most reasonable response to 9-11 available to the United States and to the world.

The Bush Doctrine ("In what sense, Charlie?"): When in danger or in doubt, run in circles, scream and shout.

The continuity of American anti-terror policy appears to have been the key to the success of this operation.

The courier was identified under Bush

But Bush had already ordered SEAL Team Six to assassinate the shrubbery on his ranch, so Bin Laden had to wait until the Pentagon could send a guy over to the Home Depot in a pickup truck to hire some day laborers.

This is the realization of the sort of "patient justice" that President Bush promised a decade ago when he declared, "Americans should not expect one battle, but a lengthy campaign, unlike any other we have ever seen.  It may include dramatic strikes, visible on TV, and covert operations, secret even in success.  We will starve terrorists of funding, turn them one against another, drive them from place to place, until there is no refuge or no rest."

Or we might just get bored and attack another country that had nothing to do with 9/11.

That is a vision that was made into a reality in the years that followed, as the United States and its real allies waged a relentless campaign against al-Qaeda and its leader that, ultimately, left it without any refuge anywhere in the world.

Except for a really nice McMansion down the street from the Pakistani West Point. Still, Bush forced him to move out of that cave in the mountains.

I have increasingly grown to appreciate the vision and adult leadership that President Bush provided.

While I have come to appreciate the dictatorship and adult diapers that President Bush provided.

It is clear to me that the course he chose after September 11th, even if it often left me impatient and eager for more stark and dramatic results, was the correct one -- a middle course between one that would leave America more vulnerable to terrorism and an extreme one that might have instantly brought on the sort of global Holy War that bin Laden desired.

In my foolish headstrong youthfulness, I earned for efficiency and results, but President Bush showed me that the answer, as always, is stasis and mediocrity.

And, in this area, we ought to at least credit President Obama for having the flexibility to, after spending years criticizing them, quietly recognize the wisdom of President Bush's policies and to adopt so many of them as his own.

Not all his policies -- Obama clearly couldn't see the wisdom of Bush's decision to break up with Bin Laden ("I don’t know where he is. I really just don’t spend that much time on him, to be honest with you.") and get on with his life and date another Arab boogeyman. Still, you'll notice that even though Bush has been gone from the White House for over two years, there aren't any tumbleweeds on the South Lawn.

Of course, this does not mean that the war is over.  Far from it.  Final victory will be a product of eternal vigilance.  The great unfinished challenge in this war remains the threat posed by Iran and, of course, recent events also show us that a new framework for dealing with Pakistan has to be found.

We should probably get organized. Tell you what, let's make a list of the countries we're not at war with. That way we can knock off early and beat the crowd to Beef 'N' Barrel.

I don't know about the rest of you but with both bin Laden and Saddam Hussein dead, I think that it's probably Muammar Gaddafi's turn next.

Mr. Yoshida then summed up by announcing that his aim in life is "to do SOMETHING BOLD AND DRAMATIC, FORCEFUL & DYNAMIC, A STATEMENT of my manhood for the world to see."
Wait -- check that. Sorry, I got Adam's column confused with the Arthur Bremer diaries.
Posted by Scott at 11:49 PM

My Poor Wife just pretends my dick tastes like candy. But, all in all, I think that's preferable to her hallucinating it.

(By the way, I'm probably gonna have at least 1400 words to say about this "Gitmo Caught bin-Laden" routine, but for now I think one will suffice: Bullshit.)

Scott, you're going to get a sternly worded letter from my new shrink. Because eew. So much eww.

On the other hand, you prompted me to rewatch Mystery Men, which is cheering me up, so there's that.

Hmm, I suspect that Mr. Yoshida might just be an emotionally stunted douchebag.

Not being familiar with Mystery Men, when I first saw the photo I was trying to figure out what Roger Waters in a Darth Vader costume had to do with neocon revisionists. Perhaps he's playing a little tune called "Several Species of Small Minded Teabaggers Gathered Together at a Rally and Grooving With a Halliburton Executive?" No?

Clinging to the idea that Bush really wanted to catch bin Laden is as pathetic as thinking we still might stumble upon Saddam's cache of WMD's somewhere in Iraq.

Please, c'mon! We all know that the finally successful hunt for Bin Laden was started by Bill Clinton. But, as ever, he left his wife to finish the work. Bush and Marxist no-so-Muslim-now Obama were only messengers in this family feud.

Adam, you're so young and so fucking, embarrassingly stupid. That's really not a pretty combo.

"I've always thought that that speech... was one of the finest Presidential orations of my lifetime -- certainly the best to be delivered in that place since either General MacArthur's 1951 Farewell speech"

I agree with Adam: President MacArthur's farewell speech was one of the highlights of his administration, sadly overshadowed by the atomic bombing of Pyongyang.

"Final victory will be a product of eternal vigilance."

Didn't he steal that line from that old Macintosh commercial? The one with the hammer-throwing woman? I think its based on a book... "Animal Farm", right?

Man, these neocons and their minions like the unfortunate Mr. Yoshida really think their shit's hot...but it's just shit. I mean I want to measure the military credential of the guy who plunked a round into bin Laden's left eye and that of Cheney and Bush and, for that matter, Mr. Yoshida.