Our Lady of the Aspens

Here's Wo'C Correspondent Keith, with one of those VH-1 Behind the Music-style profiles of Judith Miller: ex-New York Times reporter, former Scooter Libby sexting partner, and a human vuvuzela who spent most of 2003 with her ass end plugged into Dick Cheney's puckered gob. Take it away, Keith! 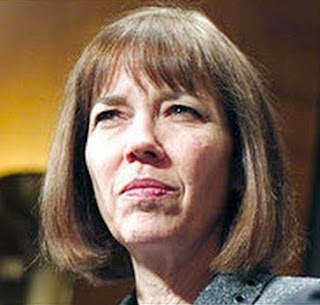 I’ll have a glass of Chalabi please ... No make that Chablis.”

Someone left a copy of New York Magazine at the unemployment office back in early November 2011. Unfortunately the crossword puzzle page had been ripped. As a consolation prize we were treated to a feature article regarding a certain former New York Times reporter, Judith Miller.

According to the celebrity profile, Judy is still shopping around that blockbuster tell-all book despite the fact that no legitimate publisher will cut her an advance. Also, Judy has switched her martini formula from gin to vodka. At home, perched before her laptop and typing away on a purloined copy of Microsoft Word, she’s probably just drinking the gin straight out of the Tanqueray bottle with few embellishments. Because Judith Miller is now blogging for Newsmax.

Warning: Judy is just plain dull. Her style is turgid and constipating. I feared Judy was not stupid enough for “World ’O Crap” readers. Then found this article, “The Many Talents of Gen. Petraeus.”

“David Petraeus spent his first day out of uniform doing something he rarely did during the last few years of his 37-year military career: He took the entire day off. He also escorted his sainted wife, Holly, a veteran of 23 moves during his army career, out to dinner. In fact, he’s taking the rest of the week off too, straight through Labor Day.”


I’m unaware of Saint Holly’s ordination but dammit I want one of those graven images for my dashboard. She’s the patron saint of moving. The boxes! The crumpled newspaper! The lost receipts!

“Except, of course, for the daily briefings he’s been getting for the last month. Those will continue. So, too, will the “prep sessions” he has been holding to prepare for his swearing-in and first meetings next Tuesday as the new director of the Central Intelligence Agency.

“Welcome to what newly retired, four-star general David Petraeus calls downtime. If Wednesday’s literally star-studded retirement ceremony focused mostly on the past, Labor Day weekend is all about the future.”


Nice to know being briefed-in as Director of our nation’s premier intelligence agency is considered “downtime.” Maybe they kicked-back with a bowl of Doritos, a six-pack of 16 oz. Bud Lites and talked about Valerie.


And Judy, doesn’t the future of Labor Day weekend mean the retirement of white trousers and, if you are a lady, white pumps? Let’s continue, because I must know which stars actually literally studded this retirement ceremony.

“For Petraeus, life is all about staying in the fight. His career is hardly ending; it’s morphing, his battle ground shifting. But his many wars — boots-on-the-ground and bureaucratic — are destined to continue. He knows that his greatest challenges may lie ahead.


Where are the celebrities? How long do we have to go on reading this crap before we get to the celebs? Except Judy Miller there aren’t any present. What a lost opportunity, Judy. You suck.

There’s more. Let’s transit over to another Judy Miller Newsmax feature. Whether fueled by Tanqueray or Old Mr. Boston, I’m not entirely sure. You decide:

“If you want to understand why the jihadist movement is losing its appeal, consider the body bomb. Reports surfaced last week that al-Qaida has been considering trying to slip a suicide bomber through airport security by surgically implanting explosives in the prospective martyr’s belly, rectum or breast. Yes, women can be homicidal maniacs, too.”


I agree. Women can be potential homicidal maniacs. Particularly in the employ of the military-industrial complex and fully-rigged with half-assed association with prominent world media in addition to DoD security clearance of dubious origins.

“The generic belly bomb has been the talk of the intelligence community since August 2009 when Ibrahim Asiri, the infamous, inventive al-Qaida in the Arabian Peninsula bomb maker now living in Yemen, planted an explosive device on his 23-year-old brother Abdullah for a suicide mission. When that failed, he recruited another would-be martyr, Mohammed al Awfi, a former Guantanamo Bay inmate who nearly killed Saudi Deputy Interior Minister Prince Mohammed bin Nayef, who heads the kingdom’s counterterrorism effort.”


Maybe Abdullah opted for the two-piece knit Chanel and plastique flats. Judy, please, now that you have our interest, where exactly was this bomb implanted? I’m not expecting any celebrities this time.

“Initial reports said that Asiri had planted the bomb inside al Awfi’s rectum. But Anthony Kimery, a veteran analyst and editor of Homeland Security Today, reported soon after the incident that Asiri had planted from 100 grams to 1 pound of explosives (expert opinions vary) not in the bomber’s rectum but in his underwear, which he assumed (correctly) Saudi security would not check.”


Anthony Kimery conducted a thorough physical examination of al Awfi. He found the other glove. That’s about it.

Judy, I’m very disappointed with you. There I was, sitting in the unemployment office all by myself, with nothing but an abandoned copy of New York Magazine to console me. Then I thought I might get a gig blogging about your Newsmax columns for a reputable snarky website. But your copy is as stale as Scooter’s old voice-mails. Have you lost your edge? Is something wrong? Judy, I’m very depressed. Please contact me asap.

This is worthy of a "the schaden freudes itself".

But my schaden remains slightly un-freuded when I remember that Judy's partner in Iraq warmongering, Michael R. Gordon, remains happily employed at the NYT.
~

I'm as critical of American crap culture as anyone, and as opposed to our excessive militarization and unlettered, Xenophobic, techno-bullying foreign policy. But, for the life of me, I can't understand what America did to deserve Judith Miller.

I thought when you referred the someone as "sainted" it meant they were dead.

Somebody goose my memory: was it Miller who pulled that unforgiveable stunt during a multiple-correspondent TV interview with the Dem presidential candidates in early 2004, when, at the very end of the time slot, with at most 2 minutes to go, she said to all 4 or 5 men, "OK, real quick, do you believe in God? Senator Kerry, you first."

It was a woman reporter from the NYT, I do remember that. My fucking jaw dropped with a crash. Total gutter-brainedness.

One small consolation i find is that Judy will have to look at that puss in the mirror as it deteriorates from her own bile.

Judith is from Planet Showbiz, in other words, and you gotta watch these fuckers. Keep this in mind the next time a Dennis Miller switches sides, or a Bill Maher or an Ann Coulter says something unforgivably stupid: they don't really give a shit about politics. It's showtime, and they're solely in it for the money; they'd throw grandma out of an airplane if it'd produce a ratings uptick. I guess we can be assured their grandmas are all dead, or we would have already seen this.

If there is anything to learn from the perfect storm of pathologies that led to the invasions of Afghanistan and Iraq, and resulting genocide, it is this, as Thomas Paine pointed out: "that there are men in all countries who get their living by war, and by keeping up the quarrels of Nations is as shocking as it is true."

Judith Miller is one of 'em, and inasmuch as she was the fourth estate vertice of the bullshit triangle comprised of her, the Bush Admin and the Defense Department, in which they all corroborated each other's lies, is as much responsible for the atrocities with which dubya is charged as any of them.

Later she would claim that she was "fucking right," and yes, she was fucking correctly: let that be her epitaph: "She fucked her country good and proper."

“Initial reports said that Asiri had planted the bomb inside al Awfi’s rectum."

Giving a whole new meaning to "blow it out your ass."

I'll tell ya something else for nothing, Sonny, about Judith Miller.

You may recall that a week or two after the World Trade Center attack of early September 2001, a number of folks received Anthrax in the mail: various news media and a couple of Democratic senators. Five people died and seventeen were infected, according to the Wikipedia entry.

On October 2, "Germs: Biological Weapons and America's Secret War", authored by Judith Miller and two other NYT journalists, was published by Simon and Schuster.

On October 12, Judith Miller claimed to have received such a letter, addressed to her at the New York Times. The letter was examined and contained no trace of the Anthrax toxin, thus making her the only member of the news media to have been thus hoaxed.

Is Judith Miller the kind of person who would fake an anthrax threat to herself to drive sales of her book?

Last add those terrifying days of post 9/11 apocalyptic yesteryear, here's a less-than-glowing review of "Germs, etc" by brit Simon Wessley, published in The Guardian on October 19 of 2001.

Women can be potential homicidal maniacs

Only a few days each month, tho.

Heh. My captcha today was "storm"

"Yes, women can be homicidal maniacs, too" ... Obviously Judy had never divorced one !

"The generic belly bomb has been the talk of the intelligence community since August 2009". Al-Qaeda grants less than 2 years of patent exclusivity ?