Sorry for the poor harvest here at the content farm.  Normal posting will resume tomorrow, but in the meantime, I've brought in some migrant labor to do the blogging jobs Americans can't or won't.  In this case, it's Keith, with an online poll attempting to determine which movies John Bull considers bullshit.

Now, I like Britain, it's a perfectly fine Mother Country, as long as you stick to wooden hangers, but I'm not necessarily an Anglophile.  This attitude has less to do with the British themselves than with the smug predictions of right wing "warbloggers" in the early days of the Iraq invasion, who foresaw "the Anglosphere" uniting to turn back the tide of Islamofascism.  In the language of Instapundit and his virtual vassal states, the Anglosphere consisted of the U.S., Britain, and Australia (Canada, which didn't want to play in our sandbox, was voted out of the He-Man Muslim-Hater's Club).  Thus was the Axis of Evil confronted by the Crotch of Justice, with America as the Freedom Phallus (which would stun the recalcitrant Bedouins with its Cock and Awe campaign), and the UK and Australia forming the supportive, yet dependent Balls of Buyer's Remorse.

All of which is a roundabout way of saying that despite my differences with British foreign policy over the years, we seem to hate a lot of the same movies.  Or so I discovered when Keith sent me the following:


The Register has posted a short-list of "Worst Movie" nominees and the list is not exactly what I expected.

Sorry Stanley Kubrick's Eyes Wide Shut didn't get a nom, it was so... crusty. (So crusty Riley & Moondoggie won't even play with it.)

Was also a bit disappointed that neither Gigli nor Swept Away (Madonna's remake) were not listed. After a bit of research found that Swept Away swept all the investors of their wallets, so a UK release was cancelled after dismal b.o. in the the US. This apparently is true of Gigli so those poor punters across the pond never had the experience of Ben Affect & J-Lo. Or Madge. Or they just weren't paying
for them on BSkyB or whatever they have over there now.

Anyway, here's a link. It's interesting. My first choice was James Cameron's Titantic but to be honest I never saw it completely. I left the theater in Times Sq. about 20 mins., asked the ticket agent when it would sink, then went out for a pint or two at the nearby "Rudy's Pub" conveniently located at 44th and 9th Ave. It's coming back this summer, in "3-D."

Manos is hard to resist but beloved because of Joel and those bots.  I believe it was one of their first offerings. Maybe Gypsy liked it a little.

So my vote went to Battlefield Earth which I have watched from beginning to end. How could one not? Travolta, a winning script from material on loan from L. Ron Hubbard, and those enthusiastic cast members get my vote any day. As well as lame focus, awkward cross-cuts, hilarious continuity gaffes and etc. It looked like no other movie I've seen. But I couldn't see it that well because I cried the entire way through and my contacts wouldn't stay in.

The poll starts off with the 13 films that were in contention, but didn't make the cut, three of which we've given the Better Living Through Bad Movies treatment (Eyes Wide Shut and Waterworld are both in the book, while Zardoz is in the [currently under construction] sequel). 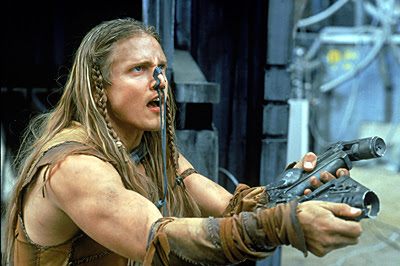 Of the twenty films in contention for All Time Worst, four are in BLTBM:  Battlefield Earth, Highlander II:  The Quickening, Star Wars Episode 1: The Phantom Menace, and The Postman, while Keith wrote about Sunshine, although he bailed out before the end, probably to save his satiny complexion from the premature aging effects of excessive UV radiation.  In other words, if you're a World O' Crap reader (and if you're not, I don't know who is), then you are uniquely well qualified to vote in this poll.  So click the link and represent!

Name me one other time you could watch Charlotte Rampling and know for a certainty she was all hopped up on goofballs?

BOORMAN, I SALUTE YOU!

Stupidest vampire movie ever. Sparkly? Vampires SPARKLE in the daylight? What happened to the pyrotechnic demise, like in Blade?

Sorry, ZRM, guess we're gonna have to throw down. Although I do agree with you about Rampling, and suspect that her comparatively sober performance in The Night Porter, made the same year as Zardoz, is due to Dirk Bogarde Bogarting all the goofballs.

In the language of Instapundit and his virtual vassal states, the Anglosphere consisted of the U.S., Britain, and Australia (Canada, which didn't want to play in our sandbox, was voted out of the He-Man Muslim-Hater's Club).

What about New Zealand?

Charlotte had the faraway eyes in Zardoz, that's for sure. Actually, all of the cast did.

Actually, I suspect I will enjoy what you write about the movie.

As thundra points out, we just have a weird little corner of the bloggerverse that has a twisted affection for The Best Bond Movie Ever.

Well now, this is a bit of a puzzle. You see, I haven't actually been to see a movie in - oh - 30 years. I live, as you know, in a small rural town and the nearest cinema is thataway about two hours by car, which I at the moment, don't have.
So, using only BLTBM and a few minutes caught in passing on the TV, and the comments of my more perspicacious cyberbuddies, I vote Battlefield Earth.
OK?
Suezboo

Dudes, if you've got Netflix streaming, I have an epic recommendation that combines WoC's love for bad movies and bad right wing creative output.

As far as I can tell, the title has nothing to do with the content. A group of young people who don't seem to actually know each other decide to hike in the woods for an unexplained reason. Then people shoot at each other, we learn valuable lessons about guns and lesbianism, and somehow the government is involved.

It's a WoC must see.

did you know that BLTBM is available at the iBookstore?

Unfortunately, the worst of them are more boring than anything else, so I tend to forget them quickly after watching them. Thus my worst movie is merely the worst movie I've seen lately, which brings me to the most recent netflix delivery, one of three movies on "15 Freaky Flicks: Disc One":

It purports in the opening scroll to be educational-- the hallmark of the exploitation film-- and it loses little time in going creepy on us, with early scenes of a twelve-year-old girl obligingly backlighted in her nightgown, and a mud wrestle with a pig, followed by a gratuitous nude swimming scene, complete with leering drunken hillbilly old enough to be her father, who ultimately decides to blackmail her mother into making her his wife. After killing her father.

O Good God. MST3K rightfully turned it down as "too disturbing".

Also on the disc, "Hitler: Dead or Alive" (1942), which was actually kind of fun, as three wise-cracking ex-cons led by Ward Bond go after a million dollar bounty placed on Hitler's head by an American businessman. Naturally Bond gradually wises up to a patriotic motive quite outside the money, and sacrifices accordingly, but not before getting off some terrifically funny gangster-speak.

And "The Terror of Tiny Town' which I haven't seen yet, but don't need to explain, I think.

As I said the disc one of five, and the rest are coming up. What have I let myself in for? Let you know how it all turns out!

British amusement at the fact that Fantasy World acccents seem to be universally British.

Y'know, my head's so fucked-up these days, "Zardoz" actually almost looks "interesting"? Definitely something wrong up in the attic...

Coming back two weeks later, I find my comment got eated.

So let me sum: Hitchiker's Guide was in arguably the worst, and I'll tell you why.

You spot a movie one of the best parody SF books ever written with no less than two successful spin-offs from the book (OK, I think the Beeb version was actually written ahead of the books, but bear with me), a cast that has as its WORST actor Zooey Deschanel (which speaks of an incomparable level of talent) and somehow you manage to fuck it up completely?

I loathe Zooey. Her parents should be beaten to bloody, lifeless pulps for naming her that, and for not raising her to be just like Emily.

Personally, I quite enjoyed HG2U, especially my secret boyfriend Mos Def, no matter HOW many Adamsphiles bitch about his being cast. The rest of the cast was satisfactory, especially whomever voiced the Vorgon motherfuckers (I'm hoping that it was Billy West, which is why I don't look it up...), but Zooey needs to grow the fuck up (she's almost MY AGE, FOR FUCK'S SAKE!!!) and stop playing that FAKE-AS-FUCK BABYFIED FUCKTARDARINA VOICE!!!!!!!!!! *THEN* she should have to go take a fucking ACTING CLASS and start over from scratch. LOATHE her.

*LOVE* Emily, though. Totally despise the jumped-the-shark-in-the-second-season HORSESHIT mutilations that Murdoch's cock-jockeys have rendered upon "BONES," just like they did to "HOUSE," but love HER.

So why, exactly, since you undoubtedly already told us and then it got eated (as the censor-happy motherfuckers at Blogger/Google do to MY comments all of the fucking TIME, so you are NOT alone, m'boy!), do you hate the flick, Carl?