If Ellis Washington (see here and here for his most recent personal appearances) were a Playboy Playmate, I'm guessing his Turn-Ons would be "Michael Savage, Natural Law, Prometheus, mis-attributing quotes, and plagiarizing from Wikipedia," while his Turn-Offs would read, "Hitler, Trotsky, Aesop, Oliver Wendell Holmes, the Enlightenment, and actually reading the whole Wikipedia entry before hitting ctrl-c."

But what Ellis really loves is getting facts wrong.  Because it just feels so right. This week he starts slow, opening his column with a juicy quote he attributes to Joseph Goebbels.  It's unsourced, however, and Goebbels is credited with a lot of statements he never actually made, the most famous probably being, "Either these drapes go, or I do!"

German Nazis?  What's the matter, Obama's too fancy to pirate the propaganda techniques pioneered by the homegrown Aryans at Stormfront?   Pah!  He probably drinks imported beer, too.

Anyway, just because something is "Exclusive" doesn't necessarily mean it's "new," or "comes as a frigging shock."  English is a constantly evolving language, and "exclusive" could now also be a term of art used by the journalists of WorldNetDaily to mean "sufficiently repetitive to induce carpal tunnel syndrome."

Okay, so Ellis has set the table with his subtitle and opening quotation -- let's dig into this smorgasbord of National Socialism.


President Obama’s sustained attacks against presidential GOP candidate Mitt Romney’s tenure at Bain Capital is a shameless frontal assault against America and her free-market capitalist system, but it has backfired disastrously against Obama. Newark, N.J., Mayor Cory Booker said that Obama’s tactics against private capital were “uncomfortable” and “nauseating.” Nevertheless, just a few hours after telling the truth about Obama’s anti-capitalist demagoguery, Obama’s people yanked his chain and Booker was forced to appear on “Meet the Press” before a surreal hostage-like background and a stressed-out look on his face to recant for daring to tell the truth against messiah Obama.

Well, couple things.  Booker's remarks were made on Meet the Press, while his subsequent clarification, if you want to call it that, was shot in his office and released on Youtube.  But to be fair, the only way Ellis could have known that was if he'd read the article he linked to, and he's really busy right now with his new job as an instructor at the National Paralegal College, an online correspondence school. 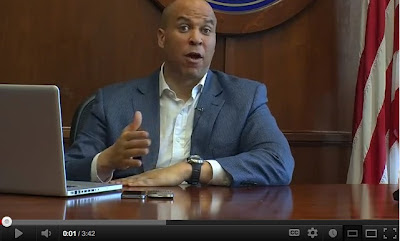 Obama’s liberal fascist attacks on Bain Capital and against American capitalism remind me of an earlier more radical time in history when Hitler was running for election as chancellor of Germany in 1932.

No one is calling Obama a Hitler, until I blow this whistle!


...but I am stating in the most emphatic manner that Obama and the Democratic Party are using Nazi propaganda campaign tactics against Romney and the GOP.

Anyway, not to be a killjoy, but Hitler ran for President, not chancellor, since the latter was an appointed position in Weimar Germany.  But enough Harry Turtledove-style alternate history -- how about some Rorschach blot analysis?


Out of hundreds of propaganda campaign posters Hitler used to both deify himself and demonize his political foes, I have found two posters that were particularly vile and reprehensible, yet very effective in promoting Hitler’s National Socialist Party (the Nazis). The first one is titled “Arbeit und brot” (work and bread). 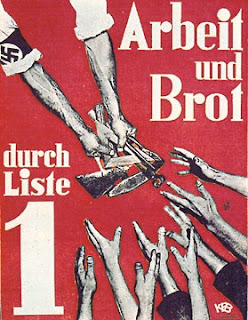 Carefully examine the campaign poster above (circa 1932) where the Nazis promised the German people work and bread for voting for Hitler and the Nazi Party. The bottom left side of the poster reads: durch liste 1 (meaning “through list 1″). In other words: Vote list 1, or on the first ballot vote for a straight Nazi Party ticket.

I'm glad I carefully examined the poster -- I never would have noticed that giant 1 otherwise -- and my study has yielded two insights: 1) While Obama may be filching from the Nazis, Hitler clearly infringed the intellectual property of Tammany Hall, and I recommend Boss Tweed sue him under the Digital Millennium Copyright Act; and 2) While Ellis may prefer the Republican candidate in each election, he always ticket-splits to avoid giving Goebbels the satisfaction.


This propaganda poster exploited the German people’s desperate need to end the social catastrophe of World War I and the economic hyperinflation of the previous failed government – the Weimar Republic (1919-1933).

It seems to be exploiting the German people's need to be handed barbecue tongs and trowels by neurasthenic arch-conservatives with weirdly elongated arms and veins that would be the envy of any heroin addict.

...or guys who work in the Garden Shop at Home Depot.


Remember that the word propaganda comes from the Latin verb propagare, meaning “to propagate” “to reproduce” or “to spread from person to person.”

That's why it's considered good form, when out in public, to sneeze or propagandize directly into your elbow.


We must remember that Hitler did not take power by force; he was voted into office using the democratic process and his superior rhetorical skills to convince the people to vote for him.

It's not true, of course -- Hitler lost the 1932 German Presidential election -- but if we just remember it -- and we must! -- it'll become true in our hearts.


Once he tricked the German people to elect him chancellor, they became, in the words of historian Daniel Goldhagen, “Hitler’s willing accomplices.”

But since Hitler was appointed chancellor by President Paul von Hindenburg, not elected, they might in this case have taken a bum rap.  (Two rules to the internet, Ellis: Always Trust the Shorter, and Don't Start Skimming the Wiki Entry When It Gets Boring.)


Hitler next quickly suspended the constitution, burned down the German parliament building (the Reichstag), declared martial law and combined the presidency with the chancellorship to become Germany’s absolute dictator, or fuehrer. He then launched World War II and the Holocaust against the Jews.

And you've got to admit, Obama has been following this playbook to the letter.  Just check out Ellis' source proving it -- a  piece from 2009 in which Congressman Paul Broun announced that the "administration was planning to use a pandemic or a natural disaster to implement martial law in the United States."  If only we'd listened...


The second propaganda poster is titled: “BOLSHEVISM [COMMUNISM] WITHOUT THE MASK” and is based on the tried and true deceit where propaganda takes 1 percent of the truth and mixes it with 99 percent lies.

And makes a delicious gravy.


In reality Communists and Jews have nothing in common other than the fact that a few German and Russian Jewish academics, socialists and leftist intellectuals were Communists or Communist sympathizers. [...]
Of course, once Hitler secured power, a few months later he used Machiavellian tactics to torture and murder the Communist and unionist groups by the hundreds of thousands, and in his 1941 invasion of Russia, Hitler killed Communists by the millions...Hitler was free to disenfranchise, torture and murder the Jews by the millions. Who would care? They are just a bunch of dirty Communists.

Wait a second, Ellis.  I thought the Nazis were "liberal fascists," just like Obama.  You're one of the few people left on the Internets who can use that phrase with a straight face; you frequently cite Jonah Goldberg's book as a history text, and take his thesis ("they were socialists!  Because national socialism!") as a given.  Now you're saying the Nazis were right wing extremists opposed to not only to communism, but liberal causes such as trade unionism?

Now I'm the one faced with a crisis in accurate reporting.  Did you actually get something right for once, or did you accidentally get your own bullshit wrong?

This journalism thing is harder than I thought.
Posted by Scott at 5:00 PM

Goebbels always had problems with window treatments. I heard this rumor from Andy Garcia. It must be true.

Scott, that column is EXCLUSIVE in this manner:

I thought the Nazis were "liberal fascists," just like Obama.

Not quite Carlin's "commiehippiepinkofag" but they're getting there!

Mr. Washington also manages to misquote the title of Goldhagen's well-known book (which wasn't about the German people voting Hitler into power anyway): it was "Hitler's Willing Executioners."

Okay, I'm undermedicated so I may have missed something vital, but apparently so is Ellis, so... All of this is based on the notion that in all of human electoral history only Hitler and Obama have promised people jobs during periods of high unemployment? Is Mitt Romney *not* promising jobs? I mean, I know he won't *deliver* jobs, but I could've sworn he was at least promising them.

I've spent the last two days hallucinating that G Gordon Liddy is broadcasting from my crawlspace again, so how is it that my world looks to be a lot closer to reality than Ellis'?

It was the fire in the Reichstag that led to Hitler's appointment, not the other way around.

But more importantly, what campaign tactics is Obama '12 using that originated with the 1930's Nazi party? The article exposes no secret plan to make venture capitalists wear yellow stars on their lapel, or any newly discovered "proof" that Jews were only persecuted because some of them were venture capitalists, so once again we have an article that bears scant resemblance to the shocking headline that it fails to support or even explain. And that is a tactic stolen from more right-wing rags and blogs than you can count.

"It seems to be exploiting the German people's need to be handed barbecue tongs and trowels by neurasthenic arch-conservatives with weirdly elongated arms and veins that would be the envy of any heroin addict."

It's that Grunewald Crucifixion esthetic, them Teutons are always falling for it. What interests me about the handout from the Nazi arms is the inclusion of a what looks like a drafting triangle, the implication possibly (since I'm not even sure that's what the object is) being that it wasn't only laboring people (the hatchet, the mason's hammer)who were in the target demographic, but whiter-collared folk as well.

My intensive study also reveals that either there are two benevolent Nazis with orangutan arms, or one with a 75 inch chest.

I hopped over to Ellis' article to see the other poster he references, which is one of those rather classic Enemy-as-Death-Personified images that also conflates Communism with Judaeism. Ellis seems to think that it was Hitler linking Jews to dreaded Bolshevism that prepared the German people's minds for policies leading to the Holocaust. Which ain't the way I heard it.

Hope Ellis instructs young legal hopefuls more carefully than he reads Wiki articles. And what does he find "surreal" or "hostage-like" about Cory Booker's youtube venue?? The strange red-and-white striped object on the right?

First, I love that site and have now permanently bookmarked it.

Second, I wasn't aware that Jonah had extended his metaphor to now claim WW2 was a civil war.

The drafting triangle in the middle of the bouquet of weaponry easily morphs, via optical illusion, into a disembodied hand. I bring this up only because I have nothing coherent to say about Ellis' myriad mistakes, except that they make me sad and they make me tired.