Novelist and Friend of Wo'C Debbi Mack is taking a bold step into the New Future of Old Media, shifting paradigms and geisting zeits at will, and all while dealing with crabs (or so I assume; I mean, she lives in Maryland, and the one time I visited Chesapeake Bay the locals seemed primarily interested in shoving soft shell crustaceans down my throat).

Anyway, Debbi is the author of the Sam McRae books, a fun series of twisty and suspenseful murder mysteries about a Baltimore attorney who is sort of the female Perry Mason, except she has more sex than Perry did, and likes to get on top occasionally.  She even has her own version of Paul Drake, so if you ever wanted to see Raymond Burr and William Hopper doff those somber suits and loud houndstooth sport coats and get down to some serious flirting, this is the series for you.  Unless you're Della Street, in which case you'll probably just wind up going home alone to eat a pint of Ben & Jerry's Lusty Lawyer Lingonberry and watch Body of Evidence with your cat.

I've been meaning to write reviews of the first two books (I'm still hoarding the most recent volume as a hedge against a boredom emergency, such as Jury Duty, or the flu), but suffice it to say that I'm a fan of the series, and I'm not alone:


In 2011, the first Sam McRae novel, Identity Crisis, made the New York Times ebook bestseller list. That book and the sequel, Least Wanted both became Kindle Top 100 bestsellers. Both novels also went on to reach the Top 100 on Amazon UK, with Least Wanted hitting the Top 10 and reaching at least as high as #6 on the charts.

Debbi has launched a kind of Kickstarter-ish campaign to publish hard copies of the McRae e-books under her own imprint, and to fund the next volume, and I'm hoping her efforts are a big success -- not just because I look forward to the series continuing, but because this is something Sheri and I are considering for the sequel to Better Living Through Bad Movies.

So click here to find out more about Debbi's books, and her scheme for world domination. 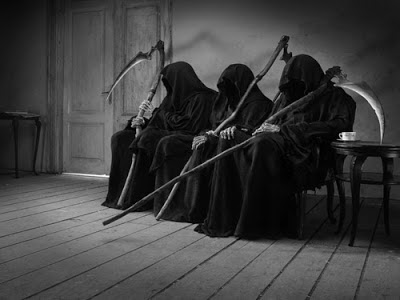 Jobless Grim Reapers, who claim they were fired after voting for Obama, wait for their numbers to be called at the local unemployment office.  "It was worth it," said one.  "The economy is my number one issue, and Obama promised Death panels!  Finally, a jobs program for the working stiff!"  However, a spokesman for their former employer, the Angel of Death, denied the assertion, stating that the three were discharged for "abusing their paid holidays and playing chess during working hours."

Drop yours in the comments.  And here's hoping you have Monday off.
Posted by Scott at 4:04 PM

Email ThisBlogThis!Share to TwitterShare to FacebookShare to Pinterest
Labels: Contests, Now a word from our sponsor

Such jaw-dropping happiness! :) Thank you for this!!!

My caption: "Bring us the head of Bernie Madoff!"

Scythes Sharpened While You Wait, No Appointment Necessary.

Good luck (to you both) on the self-publishing plan. Alas, no extra funds to contribute, blew it all down the pub last week, for which I apologize [laughing], but still, good luck.

...one of these times I've gotta draw Trump

"I hear the flan at this joint is to die for!"

"What happens when God moves heaven to a right to work state."

"Betty's a babe, but her scheduling skills suck."