Sorry, still wrestling with this project, but I feel like I need to wrap it up and get back to blogging ASAP -- not only because I can't miss any more deadlines and expect the producers won't at least take the pinkie from my left hand, but also because I get the feeling that the life is passing me by as I beaver away here in my little room.  For instance, there's now a giant chrome-plated Lenin head down the street from us: 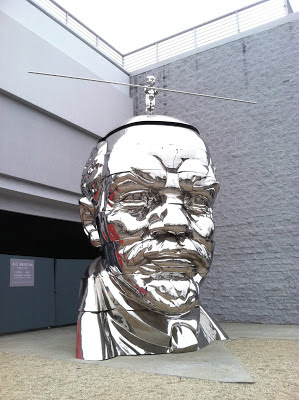 It's on La Brea Avenue, across from the defunct Chrysler dealership where we bought our car back in 2007, and stands in a weird crotch-like notch outside a failed Pontiac dealership that's now the Ace Museum.

Naturally, at first I thought the post-Apocalyptic End Times were upon us, and this was simply a flashier version of the Giant Screaming Santa Head from Zardoz.

But the Giant Lenin Head doesn't seem as angry as Zardoz, can't fly, and hasn't been heard to tell passersby that "the penis is evil" (although here in Hollywood that's taken for granted, and would be akin to remarking that hey, the sun is shining).  Of even greater significance is the fact that while the Giant Screaming Santa Head constantly flits about the Midlands, disparaging the male organ of generation and vomiting rifles (which seems like a mixed message and makes one suspect Zardoz may be compensating for something -- I mean, besides the fact that he doesn't have a body, because even when he did I bet he had a Small Screaming Santa Penis), the Giant Lenin Head seems content to simply spend the day hosting a circus on his scalp. 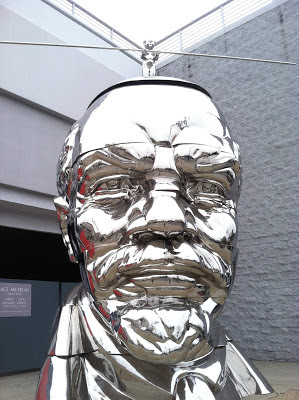 When I first saw this, I felt instantly compelled to pull over and snap some photos, figuring that any casual mention of a Giant Chrome Lenin Head Infested With Flying Wallendas would be greeted with the age-old Twitter challenge, "Pix or it didn't happen."  And thanks to the crappy zoom feature on my camera phone, I was able to determine the identity of the aerialist.  It was not, as I first suspected, a head louse who was jealous of the flea circus and joined Cirque du Soleil.  No, it's actually.... 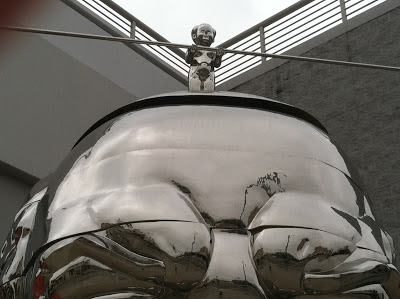 Naturally, this called for further study, and a quick trip to the Google reveals the installation is entitled "Miss Mao Trying to Poise Herself at the Top of Lenin’s Head" -- no potential lawsuit for false advertising there -- and was sculpted by two Chinese brothers, Gao Zhen and Gao Qiang.  Below is a picture of the artists posed beside their creation, just to give a sense of scale: 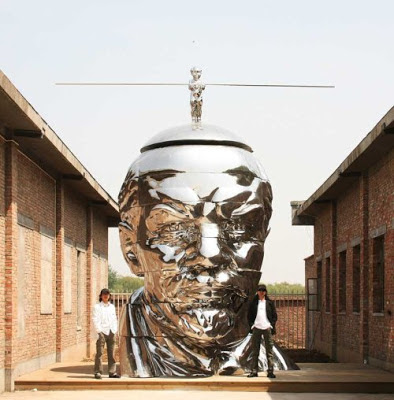 I still don't know what it means, but on the bright side, it's no longer necessary to travel to all the way to Lenin's Tomb in Red Square in order to get a good look up the Bolshevik leader's nostrils.

Anyway, I guess the lesson here is, All Glory is Fleeting, and the Penis is Evil, but the Head is Shiny.
Posted by Scott at 9:36 PM

"All political power comes from the barrel of a gun is good!"

At first I thought Lenin was sporting helicopter blades, which in my opinion would have been cooler.

Anonymous, curiosity compels me to ask, and I'm probably going to regret it:

What is your native language?

Also, had to laugh at the hed on the LATimes Article: "Gao Brothers Continue to Rile Art World."

You can't "rile" the art world, for heaven's sake. There's nothing you can do, to borrow from Lennon, that can't be done, and that hasn't been done, only forgotten.

Does seem like a lot of trouble to make up a new bust of Lenin, when there's all those perfectly good ones rotting away in junkyards in Russia.

Oh, and I can't resist this one:

Helmut, I had a similar reaction; when I first saw the bust I thought, "Hey, Giant Chrome Lenin Head saved up enough box tops to get the propeller beanie from Chocolate Frosted Sugar Bombs!"

Also, my apologizes for making the replies to Anonymous look like non sequiturs -- as entertaining as our foreign correspondent's syntax was, I had to hit the Delete key because it contained a live link, and Blogger, alas, doesn't give me the ability to edit comments.

I thought he was wearing a beanie myself

What's with all the defunct car dealerships in L.A.? I thought it was the city of automobiles. You know, jammed freeways, cruisin' teenagers in their convertibles, smog so thick you can cut it with a TSA-approved 2 1/2" knife.

And what Ms. mint said.

is the head shiny because the knob was polished? ;}

HOw can you meet deadlines if you're beavering? And I HOPE Mary's involved!

Sigh. I wish I lived where you live, Scott. The closest thing to art around here are truck testicles.

You think that's art?
This is art.

Tom Wolfe said in The Painted Word that present-day art can only be appreciated if you know its theoretical underpinnings. He regarded this as a flaw. Me too.
So, to help in your appreciation - My Theory.
The artists often portray Mao as a woman - sexist-type degrading.They are also suggesting that he wasn't a Real Communist but just riding on the shoulders (or head) of a Real Communist i.e. Maoism needed Leninism to be legit.
Dunno if I entirely agree.I'm a big Ulyanov fan as a thinker but I lean towards Mao as actually the purer populist Communist.
That's a tad glib, now that I read it.Sorry.
Suezboo.

If the artists took each section of Teh Head and set it back a foot or so from the one beneath it... now THAT would be ART.

I never knew that, Suzeboo. I've seen art with female Mao characters before but I never knew it was a direct, sexist "you're a woman" insult until now.

Stacia: I sympathize with your existential despair, but don't forget, you are within easy driving distance of the World's Largest Ball of Twine.

Suezboo: Your critical appreciation of the piece makes a lot more sense than mine; I just thought it was maybe a leftover hood ornament from a defunct ZIL dealership ("In USSR, Sport Utility Vehicle is big as all Mother Russia! We call it USSUV!")

Stacia, hon, I was going all post-modern on your ass. Just drawing my own truth from the artefact proferred.
IOW, just My Theory.
Suezboo