Future Events Like These Will Affect Us In The Future 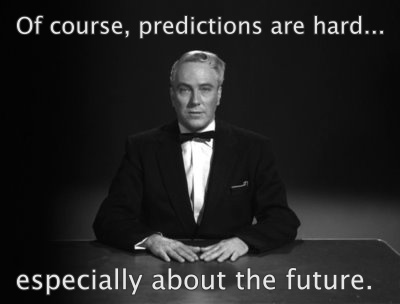 I know McMegan was innumerate, but this is sheer idiocy. Wow, she's stupid.

Jeez, I thought you had just made that quotation up. Regardless, it belongs in the next edition of Bartlett's.

You trying to step on my joke?

Just kidding. That was a softball if ever there was one.

Actually, her argument is that gay marriage will be a huge defeat for liberals, because...liberals hate marriage? I don't know. McArdle's become a lot less coherent since moving to the Daily Beast - maybe their editors are paid in exposure.

A "mandate" to marry?

Is it possible that McCardiac has a glimmer of troll inside her?

Or is she divorced again?

Megan looks good in a tux.

Oy, can someone fer the love of Christ keep this woman away from bar graphs and bad history books? She gets paid for this! Bless those who take the time to refute her point by point. My heads reels at stuff like this-

You noticed that, didja? Here's a fun game, Megs: replace "marriage" with "education" or "job prospects" or "regulatory and legal protection". Isn't that fun? It doesn't make what you wrote any less stupid, but I feel better.

"Even as we're understanding it, we're losing the reasons to be suspicious of the old marital norms. When traditional marriage, with its expectations of monogamy and longevity, no longer means excluding gays, expect it to get more popular among affluent urbanites."

You are such a poseur you can't even conceive of humans doing things for reasons other than social climbing, or Self-Branding, can you? Once it's cool, Simply Everyone will be doing it. twit.

And who's this We yer on about? I wish you and the Boy Wonder hundreds of fat children*, but I'm still suspicious as hell about anything your crowd claims as God's Will.

"One can imagine a Republican politician fifty years hence ruining his career when he throws over his husband and children for a younger man."

One needn't imagine Republican men being pigs in the future. Extrapolation suffices.

I really did think you were messing around about the quote, scott. fuck me, she gets paid for this!


*didja see the Firefly reference? Megan will hafta Google it, and she won't get the joke, haha. Morena Baccarin is good brain-bleach after a McArdle joint, too...

** I stole it from aimai

Oh, no. Oh, HELL NO. You think you can make me click on a McCurdle link? Not in this lifetime...