Sasquatch Isreal! Jim Crow Is Not

Not quite sure how I got on this mailing list, but I've just received an urgent communique on behalf of Memphis talk radio host James Edwards and his new book... 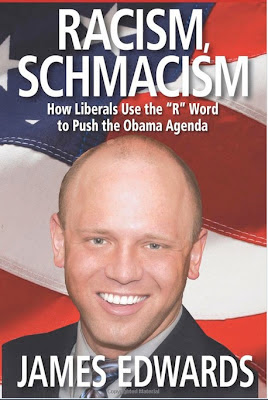 Are you sick and tired of being called a racist for simply opposing Obama's policies?

Well you should be, because it completely ignores your achievements in other vital areas of racism, such as minority voter suppression and Jewish graveyard defacement.


Discover why every conservative in America must read the explosive book, Racism Schmacism: How Liberals Use the "R" Word to Push the Obama Agenda, by veteran talk radio host James Edwards.

You've heard of explosive diarrhea?  As powerful as that is, it's nowhere near as explosive as this book (although the pages may be used as makeshift toilet tissue once you've finished reading them.  Or before; the effect is pretty much the same).

Then you have our condolences.

you've had it up to here watching the conservative movement spin its wheels, making lots of noise but never going anywhere.

On the contrary, I'm barely halfway through my first bag of Orville Redenbacher's Gourmet Farmhouse Cheddar.


You're fed up with attending Tea Parties

To be honest, that happened about halfway through First Grade, when I finally got tired of sipping air out of Chrissie Cochran's pink plastic china set and started hanging out with Laurie Stewart, mostly because we both wore Toughskins and wanted to build a fort out of appliance boxes, an inflatable pool with a ripped bottom, and a half-finished dog house her dad stopped building after her cockapoo got hit by the ice cream truck and went to live on a farm.


...and other protest rallies, hoping to make a powerful statement about big government, only to spend most of your time listening to a bunch of wimps insisting they aren't racists.


You see, it's no accident--it's happening in city after city, all over America, for one simple reason--because liberals and race hustlers know that tossing out the "R word" is all they have to do to shut down conservative dissent. In fact, it's the whole point of all this "racism" business.To keep us so busy trying to prove we're not racists that we don't get a chance to make our point.

"Our point being that the Mud People are too damn touchy!"


It works every time because conservatives just don't get it. We haven't grasped what's really behind all these constant charges of racism that the media, liberals and race hustlers are constantly hurling at us.

Yes, that does sound exasperating.  On the other hand, if you're going to complain about being called a racist while using the expression "race hustlers" in two straight paragraphs, you ought not to be surprised that it doesn't take Alan Turing to decipher your code words.


If we really "got it," we wouldn't spend another precious minute of our time worrying about being called "racists," let alone bothering to respond to it. We could get on with addressing the real issues that are vital to the future of our country.


But not 1 in 100 conservatives have figured out what's going on.

Well, no one's ever accused them of being top-heavy with brains.


You see, James Edwards gets it.

They don't explain what "it" is, but I assume from the context it's syphilis.


In his powerful book, he lays the truth right out there because he caught on a long time ago to the game the radical leftists are playing with the R word. Liberals know that the average, decent American believes the word "racist" means someone who hates people of another race, and wants to harm them.

When in reality, Webster's Dictionary defines it simply as "a NASCAR aficionado."


So, naturally, when the media and liberals call conservative activists "racists," they're horrified, and will do anything to try to prove they're not racists.

Like voting for Herman Caine in a straw poll.  Take that, Black Panthers!


Which is exactly why leftists toss the word around like confetti.They know it's a surefire way of stopping conservatives in their tracks.

It sure worked like a charm for Chaney, Schwerner, and Goodman.


But here's a dirty little secret that James exposes in Racism, Schmacism. When liberals and race hustlers use the word "racist," it doesn't have the meaning it used to have--someone filled with hate and animosity for other races.

Now it means someone filled with a rich creamy nougat who just happens to firebomb Black churches.


No, when the race hustlers and leftists use the word "racist," they simply mean "conservative white person." Period. Until you get this, you will never understand politics in modern day America.

Ah, that explains the "D" I got in Civics.  But in defense of my fellow race hustlers and leftists, I would point out that "racist" is just quicker and easier to say than "conservative white person."  Maybe we can abbreviate the latter term to make it punchier and more efficient, prune it down to its essential syllables.  How about "conwipes"?


In this brilliant (and often hilarious) new book, James Edwards proves beyond a shadow of a doubt that in today's politically correct climate..."racism" is simply anything a white person does that minorities and leftists don't approve of.

I'd like to make some snarky remark here, but have to confess that Mr. Edwards makes a valid point, since to me "racism" has always meant "televised golf" and Night Ranger's Man in Motion album.


Once you've finished it you'll never look at politics the same way again and you'll certainly never be a sucker for underhanded liberal smear tactics!

You'll be cured completely!  (Side effects may include dry mouth, night terrors, oily discharge, susceptibility to book blurbs, water retention, and loss of appetite, libido, sense of smell, and $12.37.)


James Edwards is available for interviews.

But don't pull any of that cute bait 'n' switch crap like when Playboy sent Alex Haley to interview George Lincoln Rockwell without first disclosing that the former was a ni--(CLANG!)
Posted by Scott at 11:48 PM

Email ThisBlogThis!Share to TwitterShare to FacebookShare to Pinterest
Labels: Can I Peek Under Your Hood?, World O Crap Book Club

What a clever title for a book! Right up there with "Racist Schmacist" and "Bigoted Schmigoted" and "Prejudiced Schmejudiced". My favorite is "Discrimination Scheschcrimation!"

But why did James use a picture of his cracker ass on the cover?

I don't know, Dave, that looks like his cracker face to me.

Which doesn't answer your sensible question at all.

Maybe it says something about me, but that sure looks like an ass.

My god, that was the best title he could come up with? Not even... I dunno, "We're Not Racist, You Stupidheads" or "White People Got It Tough, Too"?

And I'm trying some of that damn popcorn.