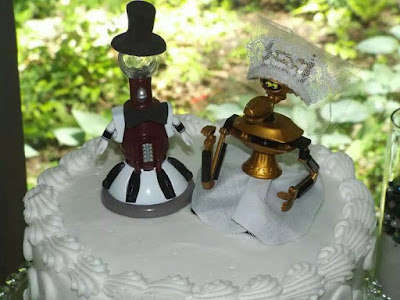 Today, August 20th, 2015, is the twelfth blogiversary of World O' Crap, with all the infamy that implies. Readers who've boned up on their Emily Post know that silk and linen are the traditional gifts for a year twelve anniversary, but don't just go to Mood and then heave a bolt of fabric at us -- that doesn't make it seem special! -- add some closures and notions; jute-covered buttons, say, or a Knit Picker. But since none of us here sew (well, s.z. might, but I doubt she has time; with all the animals she's constantly rescuing and nursing and fostering, every day of her life is like Noah's worst day on the Ark), allow me to pass on some ideas for making these materials useful to the modern consumer.

Happy-Anniversary.com lists not only the Traditional Gifts (silk, linen), but the Alternate Traditional (pearl) and the Alternate Jewelry Materials (opal, jade). More important, it provides helpful, expert-endorsed suggestions and sources for putting a contemporary twist on these ancient consolation prizes, and I've compiled our favorites into the Official World O' Crap Twelfth Anniversary Wish List:

High quality realistic silk flower arrangements:  This actually seems like something more appropriate for a 60th anniversary, along with "adult diapers" and "one hard candy wrapped in a Kleenex and forgotten at the bottom of Grandma's purse," but as blogs go, we're gettin' up there, so why not?

Teddy bear holding a silk flower:  Again, this seems more like something you'd give to a terminally-ill child, since it doesn't seem to say "Happy Anniversary!" so much as "No, I can't hit a home run for you, please stop asking."

Plus-size lingerie recommended by Oprah:  All I need to do is shimmy into my cotton-poly blend boxer briefs with the Good Housekeeping Seal of Approval and it's gonna be a hot time in the old town tonight!

Pillows and throws in international designs: Nothing says "It's been twelve wonderful years" quite like a cushion in the distinctive shape of Moldova.


You know, I didn't see "corn silk" anywhere on that list, and that struck me as an obvious oversight. Admittedly, I didn't know exactly what "corn silk" was, and heydave wasn't around to ask, but I looked it up and apparently it's "[T]he styles and stigmas that appear as a silky tuft or tassel at the tip of an ear of corn." Well that certainly sounds sexy, what with the tassels and the tips and all, and goodness knows we could use a little more style around here. Plus, I long ago learned to live with the stigma. And best of all? It's "used as a diuretic in herbal medicine."

I think we've found our winner! (Especially since I also looked up "corn smut" and that wasn't at all what I thought it was going to be.)

So on behalf of s.z. and Mary, thanks for all your hilarious and thoughtful comments over the years, and for making World O' Crap one of your choices for blogs with the word "crap" in the url.  Happy anniversary to us, one and all!
Posted by Scott at 11:42 AM

May I just say how happy I am y'all haven't migrated/disappeared to the new walled gardens of Facebook & all those other places for social idjits.

As gawd is my witness, one of these yrs. we'll all get together for a drink or ten ... (I'll have one in your honor on my own later.)

Many happy & many more!!

Cornsilk's good for smoking too.

Thanks, M.! And when you drink about this -- and you will -- make mine a double.

To think that if I hadn't been looking for ways to make loaded dice, I might never have found World o' Crap...

"Corn-silk" is something we used to use in the outhouse on my grandfather's farm. Just sayin'.

Oh, twelve is SUCH a nice age --- intellectually aware, but the woes of adolescence haven't quite arrived (for most anyway). What do you think WOC will be like as a teen, Scott and Mary and SHeri? Lovably geeky? Jockish yet dashing? Suddenly blossoming into a Fashion Leader? Political and fierce? Organic and refusing to wear leather shoes? Less than a dozen pimples per year? So many options! But let's enjoy twelve; hey, maybe you can stay perpetually pre-pubescent?

a fan all along. a fan forever!

And Li'l, since our Chief Medical Officer has diagnosed us with Repetitive Scatological Reference Syndrome, I think our perpetual pre-pubescence can be taken as writ.

Especially since I also looked up "corn smut" and that wasn't at all what I thought it was going to be.

Just imagine the confusion and heartbreak "animal husbandry" has caused throughout the years.

Happy 12th, Mary and Scott and Sherri, and here's to many more to come for Wo'C. If there's one thing none of us should fear, it's that there will be a shortage of raw materials for the voodoo with the doo-doo that you do so well.

Yay for everyone!
We all get participation awards!

And now I eagerly look forward to the Lolita-stage of Wo'C...

Happy anniversary! What M said, and also, as always, just thank you guys for existing, and continuing to exist. Participation is harder than it looks!

Twelve years, man. That's a lot of stupid wingnuts and bad movies. And surprisingly few trolls, so thank you for that as well.

PS, I've been seeing other blogs on the side. But you're still who I come home to, baby!