A Tale of The Foo As Well The Woo

Hi W-O'-Crackers, Happy New Year? Are you laughing? I've been laughing since about 10 pm. EST on Jan 19th. And continue to laugh spontaneously throughout day and evening. At the dry cleaner. At the bank. At the overpriced grocery. Even on the “E” train or while tracking commodities and equities on reuters.com.

You are no doubt asking why and I know you are expecting an answer so here it is: It's been very cold here in NYC. Not as chilly as Chicago or Cleveland but it was a warm winter here so far … Last night I crawled into bed with cat Sydney (aka “Midnight”) and we listened to the boring old Worldservice from BBC. Sydney likes it for the same reasons I do, it's simultaneously informative and soporific.

Behold the first hourly news bulletin. We both heard a blood-curdling shriek and poor Sydney was spooked. I was roused but conscious enough to hear that Sarah Palin officially endorsed Donald Trump for the Iowa Caucus.

After the bulletin was a lengthier newscast whereby we could hear more shrieking, some intelligible and some not so. As a much better scribe commented earlier today …


If I were a Democrat or a comedy-show writer, I would be on the floor right now flopping and hallelujah-ing like a holy roller at an Alabama tent revival.

Henceforth the gaiety: “Tundra Trash” meets “God's Little Cancre.” They become soul-mates. It's a match made if not in heaven at least somewheres between Atlas and D.D. Bean manufacturing. World famous former reality TV host joins force with another world-famous reality TV host and a hush from their Lord's blessings stills the known cosmos.

I've concluded that Mrs. Palin might have been intoxicated when presenting her endorsement, which makes it even more lovely. Well, we're being too kind here, she was flat-out drunk. If she were at Rudy's in Hell's Kitchen in the same state she'd be '86-ed. Thank you, “New York Values.”

Somewhere in the amorphous regions of the unconscious, between “Tastes Great, Less Filling” and perhaps even “Truth or Consequences” lies the essence of this liaison. 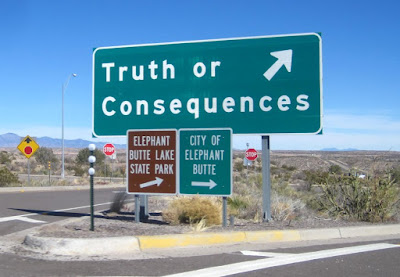 (No offense intended to New Mexico residents of “ToC”.)
Posted by Scott at 12:15 AM

Email ThisBlogThis!Share to TwitterShare to FacebookShare to Pinterest
Labels: Cult of Caricature, Guest Column, Keith's Cogitations, Proud to be an American

And I love how He, Trump went all Jon Lovitz on this:

First, it was
"I told her it would be absolutely fine. I thought it would be appropriate," Trump responded.
Then a few seconds later
"And I told her — I actually suggested it — I said I think it would be a great forum."

I heard the shrieking, too. I thought a fox had gotten into the chickens until I realized it came from the TV.

I lived in T or C for 11 years and seeing that sign (that I passed thousands of times) brought an almost painful rush of nostalgia.