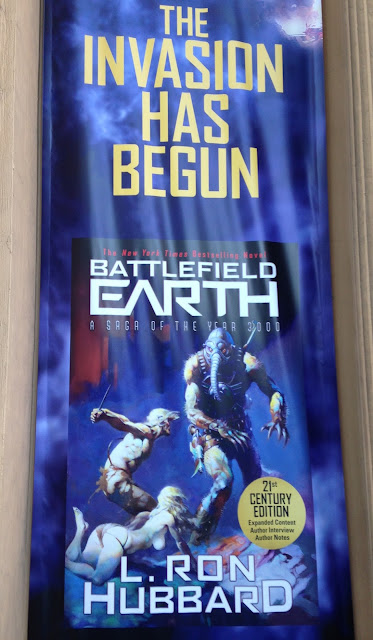 I enjoy living in Hollywood. The climate is generally mild (not this week, but generally), thanks to the onshore flow that caroms off the hills behind us (leaving the Valley to broast in its own sweat), and the neighborhood is walkable, with an abundance of bars, movie theaters, unlicensed food carts, and shops selling knee-high platform boots and acrylic beehive wigs. On the negative side, it's filled with Russians, hipsters, and disappointed tourists, and our end of Hollywood Boulevard is frequently quarantined due to a variety of -- to my mind -- trivial and irritating pretexts: the Academy Awards, the L.A. Marathon, the Latin Grammys, the odd Van Halen reunion concert, and an endless, Human Centipede-like succession of movie premieres. And then there's the Scientologists...

I don't like to harp on the Hubbardites because what's the point? They're so ubiquitous along the Boulevard that it'd be like a guy who works on the kill floor of a slaughterhouse wrinkling his nose as he winches a bloody carcass across the tiles and muttering to his co-workers, "You guys smell that? It always smells weird in here. It's like I'm tasting copper..."

Usually when they swarm me with pamphlets outside the Scientology book store on Hollywood Boulevard, or offer to hook me up to an E-Meter for a free personality test outside the other Scientology book store on Hollywood Boulevard, I just say, "Sorry, but I'm already in a cult and I'm afraid of becoming overscheduled." Because Pick Your Battles, am I right?

Also, I'm afraid of divine retribution from Xenu, assuming he's a divinity and not just a super-villain, because I once pointed out to a currently inoperative, but aspiring Operating Thetan that Xenu is the only character in a major religion's creation story that sounds like a sneeze. But I softened the blow by adding that I didn't mean one of those big vulgar "Ahhh-CHOO!" sneezes where you really wind up and don't cover your mouth in time, and a couple days later notice a meteorite-like booger fused to your computer monitor. No, "Xenu!" is a cute, high-pitched, and dainty sneeze, the kind of thing that would annoy, rather than frighten the cat nesting on your lap.

But sometimes they're unavoidable -- like last week, when the "21st Century Edition" of the world's most 20th Century version of the 30th Century was re-released for some reason: 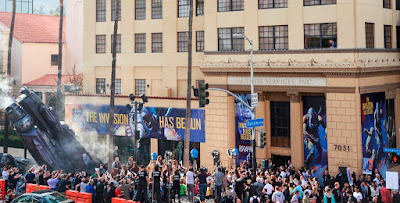 Yes, Galaxy Press, which is the Church of Scientology's in-house vanity publisher, decided to crash a space ship into the sidewalk outside its relentlessly beige headquarters in order to mark the new edition of Battlefield Earth; and while it was an inconvenience for those of us just trying to get to CVS, I can't argue with the symbolism. Hell, if they'd truly committed to the metaphor and set the building on fire too, I might have even bought the book.

In addition to the smoldering wreckage, two actors playing Johnny "Goodboy" Tyler and his girlfriend Chrissie (who apparently works at some post-apocalyptic strip club) were on hand to act out the plot for people who didn't want to plow through a thousand page book, but still wanted to see busty, half-naked neo-Vikings. 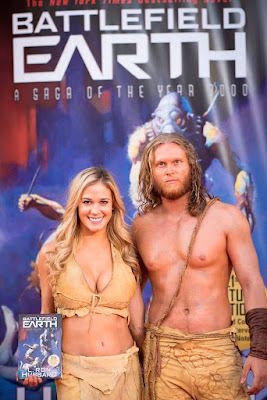 The Battlefield Earth passion play climaxed with a bunch of Braveheart cosplayers putting a Sasquatch deep sea diver in bondage. 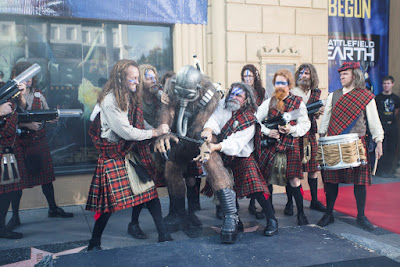 (By the way, while looking up the book, I discovered that Sheri and I -- through no fault of our own, I assure you -- are quoted in the Critical Reception section of the Wikipedia page for the Battlefield Earth movie.)

However, if you don't have time to wade through all 1072 pages, you'll be pleased to learn that:

None of whom got paid, I'll wager, although they might have received a discount coupon good for 15% off their next Auditing session.

88,000 of which probably consist of uncompensated Scientology initiates making armpit farts, but still...


and three hours of original music

Here's where the production gets expensive, because only Operating Thetan Level IVs have the mental and physical discipline to make their armpits fart out a melody (Level IIIs can sometimes manage an armpit beat box effect). But the amazing thing is the advanced data compression technologies used to bring you this novel of the Future!, for the entire book takes up a mere 44 CDs. At this dizzying rate of miniaturization, we may one day have an ENIAC machine that weighs less than 50 pounds, and is no bigger than a large suitcase!

So anyway, learn from the experts. The next time you publish a bloated re-release of an already swollen novel of the Future!, celebrate by shutting down a major thoroughfare, forcing one of your employees to put on a Wookiee costume, a gas mask, and Gene Simmons' boots from KISS, while other employees are made to dress up like Scotty McTape and attack him with t-shirt guns. It may not sell books, but at least it's more dignified than a Trump rally.
Posted by Scott at 11:24 PM

Email ThisBlogThis!Share to TwitterShare to FacebookShare to Pinterest
Labels: For No Good Reason, Hollywood, How Are You Fixed For Snake Oil?

Seriously, I have nothing other to say upon embiggening that fabu street scene.

Thank you for this.

I LOLed so hard I nearly ROFLed or LMAOed or just ended up DOA!

Have you heard the Oh, No, Ross and Carrie episodes in which they infiltrate Scientology? AMAZING stuff.