Your Show of Shows 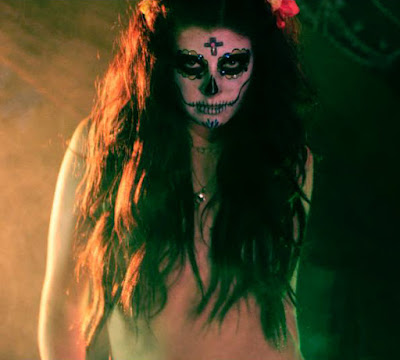 The new Slumgullion has dropped, and it's our special Tenth Episode anniversary extravaganza!  Voice actors John Szura and Blanche Ramirez stop by for a live reading from the upcoming audiobook for Better Living Through Bad Movies, so if you'd like to hear two very funny people perform an attack on Attack of the Clones, check it out.

Meanwhile, Jeff sings an original song from his musical-comedy adaptation of the 1972 Ray Milland/Sam Elliot eco-horror movie, Frogs: The Musical. [Note to Hank: This is not, in fact, the big second act climax, Today the Pond, Tomorrow the World!, which Jeff has been promising on previous episodes, but the Sondheim-esque opening number, The Day of the Animals, which crams in references to just about every abnormally enlarged creature in creature feature history, from The Giant Gila Monster to The Night of the Lepus.]

The Unknown Movie Challenge is another jarring change-up, as this week we watch and talk about Mexico Barbero, a 2014 anthology of eight short horror films based on Mexican folklore. Come for the hymen-stealing demons dancing around in adult diapers, stay for the Day of the Dead-themed strip club.

Click here to listen, and as always, please drop us a comment here to let us know what you think.
Posted by Scott at 2:47 AM

I think this episode has one of my favorite titles. :-)

Well, what can I say but that Jeff's teaser from Frogs: The Musical is like a jam doughnut: Its arrival brings us pleasure, while its departure merely leaves us hungry for more.

Should I be ashamed to admit I caught almost every one of his creature-feature references? Although that "giant rooster" had me scratching my head for a bit. But then I recalled a certain director whose initials are "B.I.G.", and realized I actually paid money to see that one in the theater. If Marjoe Gortner had gotten his face chewed off by a giant rat, that might have been some small compensation for the experience, but sadly, it was not to be ....

I enjoyed the reading by John and Blanche, which once again gave me the opportunity to LOL over the way you described the climactic duel between Count Dooku and Yoda.

And speaking of phrases and images I can't get out of my head (although in this case, I really, really wish I could) "dripping demon dick" has now been added to that ever-growing repository. It would make a great title for a Death Metal tune, though.