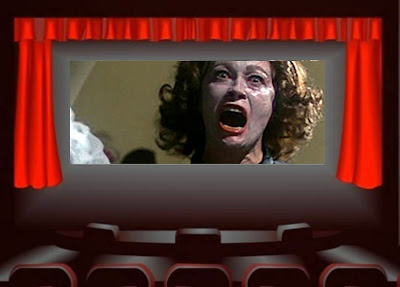 It's Mother's Day once more, and time for us to look at some movie and TV moms who make us grateful for ours (we hope)

MAY CAMERON (Kate Harrington) Rachel, Rachel (1968). Rachel's mother is so shocked--shocked, I tell you!--to learn that her unmarried 35 year old daughter is --gasp! -- having sex, that she fakes an attack and summons her doctor, and laments, "Why couldn't you just have gotten married, like your sister Stacy?" Um, gee, maybe because she spent the last 14 years of her life sacrificing her own happiness to look after her lazy, ungrateful, judgemental nag of a mother, while resisting the urge not to force-feed the old bat an entire bottle of "sleepy-bye pills"? 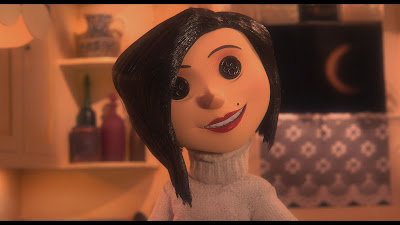 She looks like an exact duplicate of Coraline's real mother, except that she's fun and perfect and tries to create a perfect world for Coraline. Oh, and also she's different in that she has creepy button eyes. Oh, and she's a beldam who wants to keep Coraline prisoner and drain the life out of her.

ILISE CHANDLER (Gretchen Mol) Manchester By the Sea (2016) When we first see her she's a stoner who barely even seems to notice her son Patrick, which explains why her ex-husband Joe winds up getting custody of the kid. Years later, after Joe has died, Patrick contacts her and we discover she's turned into a Stepford mom engaged to marry a passive-aggressive religious fundie douche. It's hard to decide which incarnation is worse, but easy to see why Joe preferred having his emotionally crippled brother get custody of his son.

The year's Oscar winner in the Best Picture category, and if there had been a category called "Best Depiction of an Awful Mom", it would have easily won that too. The story follows its lead character, Chiron, through three chapters of his life: child, teen and young adult. Paula is in all three chapters too: neglectful crack whore, neglectful crack whore who shakes down her teenage son for money, and reformed, apologetic ex-junkie. Chiron doesn't accept her apology, with good reason.

LILLIAN LUTHOR (Brenda Strong) and RHEA, QUEEN OF DAXIM (Teri Hatcher) in "Supergirl". It can be a blow to parents when their children don't live up to their full potential. Lillian, for example, is disappointed that her daughter Lena didn't follow in the footsteps of her brother Lex and become a power-mad psycho. And Rhea is disappointed that her son Mon-El won't return to the people of his home planet to lead them, preferring to stay on Earth with his Kryptonian girlfriend. It's especially rough now that Rhea is a widow (having murdered Mon-El's father). Gosh, what's a mother to do? Well, Rhea emotionally manipulates Lena by presenting herself as the mother figure she longs for, in order to trick Lena into developing a transporter that will allow the people of Daxim to invade Earth, possibly wiping out humanity. (NOTE: As I'm writing this, there are still two more episodes of the season to go, so I don't know what the outcome of this will be. For the characters, I mean; I'm guessing Earth will win.)

KAREN WALKER (Megan Mullally), "Will & Grace". America's most beloved booze-swilling, pill-popping, hedonistic gal pal shouldn't be trusted to raise a house plant, let alone children, although at least with children there's less chance she'll try to roll them up and smoke them (we hope). Karen is stepmom to youngsters Olivia and Mason, though it's easy to forget that since we only saw her stepdaughter once, and never saw her stepson at all. We THOUGHT we did, in a episode where she tries to assure him that, while it may seem like she doesn't pay him any attention to his, she's actually proud of him and gosh darnit, she loves the little guy! It would be a touching moment, if only Jack didn't ruin it by pointing out that the boy she's hugging isn't Mason, but a complete stranger. Whoops.

JANINE "SMURF" CODY (played by Jackie Weaver in the 2010 film, and by Ellen Barkin on the TV series) "Animal Kingdom": 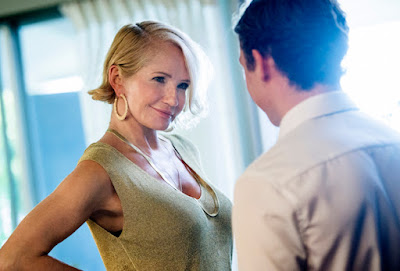 There are a lot of differences between the two version of the crooked Cody clan-- to begin with, the movie is set in Melbourne, and the series in California. But one thing is the same in both: the family is ruled over by a ruthless, scary, and disturbingly sexy matriarch. Weaver's Smurf hasn't a twinge of guilt about plotting to have her grandson killed. Barkin's Smurf actually does have her daughter-in-law killed (she's also a little TOO comfortable seeing her sons and grandson naked). Either way, you do not want to get on her bad side, and finding the good one is a challenge.

Happy Mother's Day everyone. Sing us out, Mama Brady!

Bravo, Bill! Another stellar Mother's Day Pop Cultural Post! And the icing on the cake was that AWESOME video of Florence Henderson taking an AWESOME song from "Chicago" and making it her very own.

I could only bear to watch a few minutes of "Will & Grace." Was Megan Mullally the one with the voice that could etch glass?