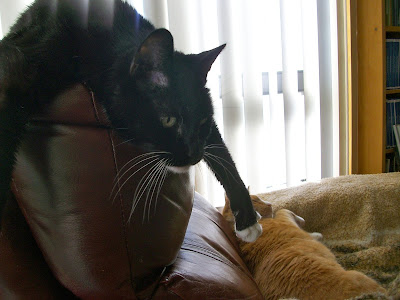 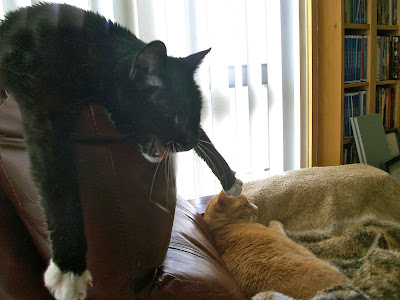 And I could ***SO*** fucking believe that Riley WOULD DO THAT, if not also the world's nastiest Wet Willies...

Nothing more picturesque than a cat in mid-hairball-hock!!!

Thought of sending your "Best-Of" portfolio of unnatural "nature photography" ici dans la Maison du Clevenger to National Geographic? Might make one helluva third job! I could see these two with their own 8-page bleeding-to-the-edge, full-glossy color layout... You take the pictures & write the captions, I'll format the pages!

(Does anybody still use pica, or is it all digital millimeters?)

Annti's right, of course she'd do it that way. Why should she get up from her comfy loll -- and it's a straight drop to the rug, right? We poor apes can only admire that kind of relaxation.

The only layout programs I know are Quark and Publisher, and their leading goes by points, as do the font sizes. In Quark I just chose number of cols needed, then width of gutter in inch fractions. Margins and headers were in inches too.. but I never did really complex stuff. Google informs that in InDesign, which has pretty much kicked Quark's ass out onto the sidewalk, picas are the default measure for the rulers, but this can be changed. So you'd be ready to go, you old pica-ist. Let Nat'l Geo gird its loins in preparation!

Oh, Li'l, honey, you are LIGHT-YEARS ahead of me, you'd be far closer to an expert in layout than I've EVER been. I haven't done an ad or magazine layout since that mandatory ad-design class in college, and back then, U.N.O. was so broke, we were still using X-Acto knives and rubber cement! I just remember being able to use a Pica ruler, which has long-since disappeared (having moved as many times as I have since then will do that...), but honestly, if you gave me a gridded "old-school" sheet of layout paper, I'd probably be too senile to use it properly! I volunteer you for the layout --- and heaven help the NG editor who tries to cross swords wit' you, darlin'!

But with this kind of fascinating study of these Feline Overlords, how could they critique or complain? Riley & Moondoggie have been stars/celebrities to us for years, but the rest of the world deserves to indulge in their fabulousness, as well. Hop to it! (That means YOU TOO, Scott!)