A lot of people despise and mistrust Google, but I happen to think that as soulless, potentially world-ending technologies go, it's pretty good-natured and accommodating.  Oh, certainly, it has its problematic side, but if millions of people pestered me with stupid questions a billion times a day, I'd be even more snappish than I am now, and nobody needs that.  Also, they don't employ that annoying hipster guy from those "Bing It On Challenge" commercials.  But there are some topics Google just prefers not to get into -- issues such as Hitler pee, artificial eyebrows, and the heartbreak of Battlefield Earth crotch -- and when a desperate interlocutor raises one of these tender subjects, the Boolean operator just gestures vaguely in our direction, then goes back to searching itself for topless images of Abbie Cornish.

At least, that's how I assume most of these people wind up here.  And while it's not my job to answer their questions, since I'm not a highly advanced algorithm created by two Stanford Ph.Ds in the late 1990s as far as you know, I still like to be hospitable.  So let's grab a few brews from the fridge, tear open a bag of Tostitos, and see if we can't help them with their problems.  Or at least, the first ten of them.

1. head of lenin on la brea:  Yes.  (We originally ordered the head of Alfredo Garcia, but they were out of stock.)

3.  is there a real california lifestyle?:  Yes, it involves eating a lot of Ramen noodles so you can afford gas.

4.  bunch of crap mlk speech celebration:  Not a question really, just a composite of all the headlines at Townhall, American Thinker, and WorldNetDaily the day after the March on Washington anniversary.

[In case you were wondering, this sudden influx of incest-seekers seems to have been triggered by Bill S.'s funny -- but apparently irresistible to the insatiably incestuous -- review of Flowers in the Attic.]

6.  kissing above stomach:  I assume this question comes from some ambitious corporate ass-kisser looking to push the envelope, and I'm afraid the answer is No.  HR frowns on anything above the belt.

7. butt power pell:  They're really making it hard to qualify for those college tuition grants. 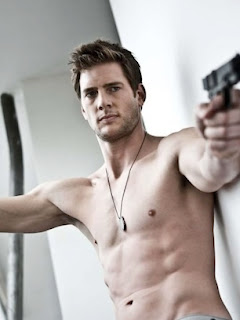 When it comes to John Woo-style two-fisted gunplay, they just prefer someone a little more believable, like Luther Adler, or Mollie Picon.

10.  lassie sexy: Well this one popped up in the referrer logs just last night, so as hard as it is to admit, it looks like former Senator Rick Santorum was right: first you allow sexy birthday lizards to commit frottage on your blog, and the next day someone is violating the personal boundaries of a border collie.

Anyway, now we come to the fun part (for me at least), because as you know, this is an Open Source project, so the next five questions are for you guys...

11.  do troll dolls have demonic spirits?


15.  erection in a flightsuit

Have at it in comments!
Posted by Scott at 2:26 AM

I'm afraid that first term was my bad. I went to a Mexican restaurant and asked for Russian dressing on my tar salad...

11. do troll dolls have demonic spirits?

Obviously referring to the Turkish knockoff version of "Trilogy Of Terror".

"A spoonful of sugar helps the multisegmented hermaphroditic intestinal parasite go down..."

12 was me. I was looking for diet tips. For the record, these posts are exactly why I don't search here to find posts I half remember. Any attempt to use a phrase specific enough to actually find it is going to make me look like an even bigger freak than I am when you haul out these strings.

Over at Sadly, No, we were directed to a site called Awkward Boners. (You would not belieeeve what goes on in that comment section.)So, I thought that the one about the flightsuit is probly listed on the site.
Ya think?
Suezboo

Suez, my first thought was "erection in a flightsuit" was a reference to George W. Bush, but then I remembered his bulge was due to balled-up tubesocks provided on a cost-plus contract by Kellogg Brown and Root, or General Dynamics, some other defense contractor, so that can't be it...

Except for the troll dolls, I sense a continuity of theme in these searches... tubes, worms, cods, pieces, Gary Cooper. Looks like a large, maybe international, multi-coven of witches is doing innovative research as they gear up for the November Eve festivities, which as we and Rush Limbaugh all know, are hot stuff.

Very stimulating until you get to that flightsuit item, which - tubesox or no - is inevitably depressing.

easy to swallow tapeworm
Wasn't that a Hot in Cleveland?

Come to think about it, codpiece bicentennial man fits him pretty well, too.

tube Gary Cooper
Remember to squeeze from the bottom.

do troll dolls have demonic spirits?
Does Weird Dave?

As much as I loathe Microsoft, don't pick on Jonah on those lame-as-fuck "Bing it on" commercials --- he's a helluva lot better on "The Nerdist"!!

I have been using Chrome as a joke of a fucking browser ever since Win7 MURDERED my motherfucking FIREFOX, those anti-trust-law-obliterating QUEEF-BRAINED GLOBE-EATING COCKBITES --- and it (Chrome teh browser) FUCKING *SUCKS* GANGRENOUS DONKEY COCKS!!!!!! Not really related, but needed to be said.

Also, the advertising after this post, "7 Biblical Truths About Investing REVEALED/Watch Video" --- makes my flesh crawl in a way that it hasn't since I last heard about Fatfuck Limbaugh buying illegal viagra to bone little boys in the Dominican Republic.

I cannot even BEGIN to deal with these search strings after #2. I leave the humor to funnier people.