A Day of Love and Crust

Happy anniversary to D.Sidhe and her partner!  And to the lovely maryc, who's been putting up with me on a daily basis for a good half decade.  (Frankly, what with all the gay marriage going on lately, I thought that by now our bonds of matrimony would have just sort of dissolved, like stitches, but Mary insists that no, we're still married, and yes, Maggie Gallagher is a stupid bitch.) 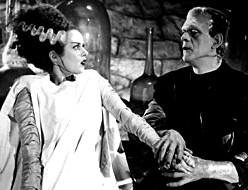 I consulted Emilypost.com for traditional gift ideas, and learned that five years is your pizza anniversary (or it is now that Emily is dead, and her starched rules of etiquette can be impulsively revised just like Wikipedia).   Actually, five years is "wood" or "wood object," which sounds just as cheap, but much less useful than pizza.  Plus, I haven't forgotten what happened to Edward Woodward when his wife got him a Wicker Man for their fifth.

And for those who may have missed it, here's a heartwarming tale of one man who got more than he ever dreamed or wanted for his 15th anniversary, courtesy of the sublime Bloggess:  And that's why you should learn to pick your battles.

Now if you'll excuse me, I hear Cupid knocking at my door, with a quiverful of passion-tipped arrows, and a large sausage and pepperoni, extra cheese.
Posted by Scott at 12:55 PM

Sausage and pepperoni and you're still married after five years? Sheesh.

(Also: I followed that link to the Bloggess. I wonder if her significant other is really as outmatched as appears to be the case from that one post! I worry about these things, you know.)

I think marriage is stupid! Wheee!

But you make me want to believe.

Okay, well, not for me, but definitely for you, to the point where I'm even gonna wish you a happy commemorative day event thingie. Happy happy!

Larkspur's right (Wheee!) but it has its advantages, mostly legalistic. And when two people can get along besides, well, who am I to judge?

Congrats to all for sticking it out, & happy day to Canada as well!

And next year's iron, which, if you get lost and find yourselves in Indiana, you'll be able to pack into your workplace without interference from your employer, thanks to the World's Third-Worst Legislature.™

Marriage is great! Everybody ought to try it at least once.

I had my 17th Anniversary 6 days ago, and if you're wondering, that's the Boron Anniversary.

and the 4th is the 22d anniversary of my proposing to my wife. Hint: don't propose during the fireworks finale unless the response you want to hear is "huh? what?" (seriously, I had to ask three time, then she saw the ring)