And Now For Something Completely Similar

You guys did such a hilarious job responding to Mary's caption challenge for this photo, that I wanted to get in on the action, so I thought I'd ask you to make sense of this one. 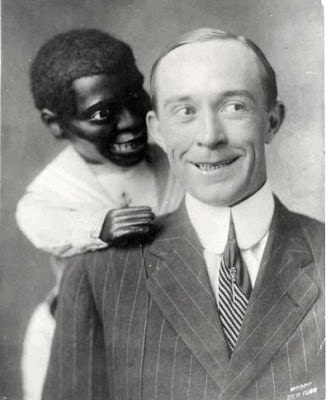 Pioneering African-American ventriloquist Walter J. Fredericks and his dummy, "Silent Cal."
Posted by Scott at 1:28 AM

Coolidge is my cat! Beyond that, what can one say? Except what the fuck?

"Listen, Mitt, I know we're opponents and all, but I hate to see you like this. Maybe if you ditch the celluloid collar and take the rubber bands off your back molars, this campaign would be fairer..."

The remake of "Black Devil Doll From Hell" took a surprising turn.

(WO'Cers are more familiar with bad movies than most people, but if you haven't seen "Black Devil Doll From Hell" you should probably do everything you can to keep it that way. Imagine a pornographic movie featuring Tyler Perry as Madea and a Rastafarian vent figure shot with an 80s vintage camcorder and scored with the finest Casio keyboard available at Walgreens. Or don't, if you plan on sleeping tonight.)

Mitt Romney's new ambassador to the African-American community and his lovable pal "Sambo" were not able to improve upon the Republicans' dismal poll numbers among non-white voters.

"Trust me, Mr. Paul, baring your teeth and cringing away from the camera makes you look friendly and easy-going, I promise."

"Want to learn how to Rope Dance, Whitey?"