I do so much planning for school that when it comes to our personal life, I like to just wing it.  Which generally works fine, in my opinion, although certain people may disagree, like when they accuse me of forgetting their birthday just because I looked surprised when they finally mentioned it at eleven o'clock at night, and I may or may not have replied, "Uh...Um...I'll be right back," and then rooted around in the back of the refrigerator until I found a bottle of beer with a 2009 expiration date and presented it with a great flourish, before going back to playing "Words With Friends."  Because what's a birthday without a surprise party?  And by "surprise party" I mean "unexpected and expired beer."  So I think I pulled that off rather neatly.

In a totally not related development, I decided to try to plan something nice for Scott's birthday in advance this year, and since the occasion falls around Halloween, I got to wondering if the Spook-a-Thon was still a thing.

For those who aren't in the know, the Los Angeles Conservancy is a group that has worked to preserve, among other local landmarks, the gorgeous moving picture palaces on Broadway in Downtown L.A.  One of the ways they raise funds is through a program called "Last Remaining Seats," in which they present special events in the restored (and a couple of the still-badly-in-need-of-restoration) theaters, and a few years ago, they had a Halloween event at the Orpheum (built in 1911, and the oldest remaining Orpheum circuit theater in the country). 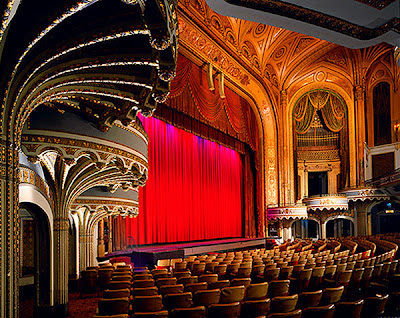 It included the The Mummy (1932), preceded by the 1939 Three Stooges short I Want My Mummy, which was preceded by some very cool neo-Vaudevillian acts, including a septuagenarian stripper who had performed in the same theater back in the Fifties when it was a burlesque house, and who basically did her same act (she lost her nerve at the last moment, but a standing ovation finally brought her out of the wings, and inspired her to shake her various and elderly moneymakers.  It was awesome).

Sad to say, the Spook-a-Thon isn't a thing anymore, but when I did a web search, the following (click to embiggen) was recommended as a reasonable facsimile: 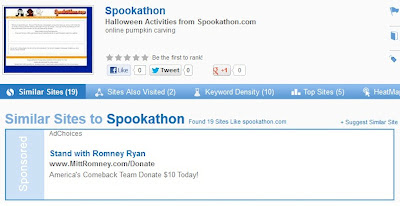 Scary, boys and girls!  In fact, the only way this could be scarier is if it were in 3-D!

Was it Scott's birthday?

How come Facebook did not mention this? Could it be that Scott has reached the, um, age where being reminded that the digit "5" is not nearly as scary as the digit "6"?

Um, yahoo, or something [yawn]. My God, that is so sad: it even sounds tired and boring when you say it, like a late night infomercial, or something out of a motivational seminar. Dare To Be America!

Nice one, Mary. My friend Rebecca took me to a Spook-a-Thon one ChrisVmas eve many years ago, and it was great fun: we saw Carrie, which turned out to be a lot funnier in a theater because everyone in the house was snarking at it, and then a three stooges short which had a lot of skeletons (and of course obligatory xylophone accompaniment), and then the main feature, The Black Cat with Karloff and Lugosi, which was the first time I'd seen it.

I was struck by how good the Three Stooges short looked, cinematography-wise, and I'm damn happy to have seen The Black Cat at least once in my life on a big screen, and boy, everybody stopped laughing when that thing came onscreen. Well, we did laugh when Bela delivered the magnificent and arch response to the young writer's
"sounds like superstitious baloney to me":

Hearing Bela say the word "baloney" is what put us in stitches-- it's just not in the dark and deeply threatening lexicon, you know?

But it all looked terrific, and man, I would give anything to live in that gorgeous Art Deco house that Engineer Poelzig built for himself.

Carrie, on the other hand, looked like shit, and much of the laughter was directed at the very youthful William Katt, in his first movie role, and his overwhelming head of hair, and I mean the theater erupted in laughter whenever he and that hair appeared onscreen.

Happily, Katt (yeah, I know, son of Barbara Hale (Della Street) was able to live down the embarrassment and went on to a prolific acting career, and is still working, the little scamp.

Wow ! What a magnificent theatre!
We had one near us when I was a mere kid which aspired to that level of luxury but did not have side boxes. On the other hand, it did have a Smoking Section - the Empire Theatre, of fond memory.Except we called it the bioscope. Older SAfricans still do and the reason we didn't get TV until the 70s was because our homegrown rightwingers loathed the bioscope-in-a-box and said it would tempt us to sinful ways.
Suezboo.

By the way, not many folks know that the Orpheum has one hell of a mighty Wurlitzer pipe organ, and though I'm not sure where the pipes are at, the three-manual console is right in front of the stage, on a otherwise hidden elevator platform that can rise up gracefully from the depths when needed.

The organ was fully restored and restopped and releathered as part of the theater restoration, and looks and sounds every bit as grand as the theater it's in.

As Huell Howesr might have said, and probably did when he visited the Orpheum in one of his many PBS shorts, "How About Thayat?!"

I was in L.A for only one morning in July on my way home to Australia. I realized I had enough time to check out the Bradbury Building on South Broadway. I ended up walking north for an hour, amazed at the number of old theaters. I also got three good T shirts for five dollars. Bonus!

Carl: No, FB has not failed (at least, not anymore than it does on a daily basis) -- my birthday isn't until the 27th. I give Mary points for at least intending to plan ahead this year, then immediately giving up, but not before getting a blog post out of it. Because, priorities.

Suezboo: Did you guys call the Empire "the bioscope" as a charming quirk of the local dialect, or is that a South African colloquialism for all moving picture theaters?

And SA didn't have television at all until the 70s? That's fascinating, I never knew that. And thinking back to what was on TV at the time, what a crappy decade to get your first taste of the medium.

Oh, bioscope was the name of all moving picture palaces when I was young (Afrikaans : bioskoop).Then came flicks, fillums and now I suspect, movies is the only cool thing to say. Cinema was always for elitists.
Yep, the 70s. The SABC trusted Europe more than the USA sinful-temptations-wise, so we got a lot of German detectives dubbed into Afrikaans.Even Arsene Lupin was healthier for us.Some of the homegrown stuff was OK, like Shaka Zulu who was (gasp) black and spoke (!) Zulu.But it is one of the reasons so many of the US pop culture references slip over my head.Never had MST3K, for e.g.
Suezboo

Re Bioscope, it's an early name for movie projector. See also Biograph, by the way, same thing, which famously, at least in John Dillinger's case, was a name adopted by some movie theaters.

I'm tempted to think that Bijou is some sort of French version of the above, since it was such a popular name for movie theaters, but know better-- it means, simply "jewel."

I had no idea Paul Ryan played Count Floyd...